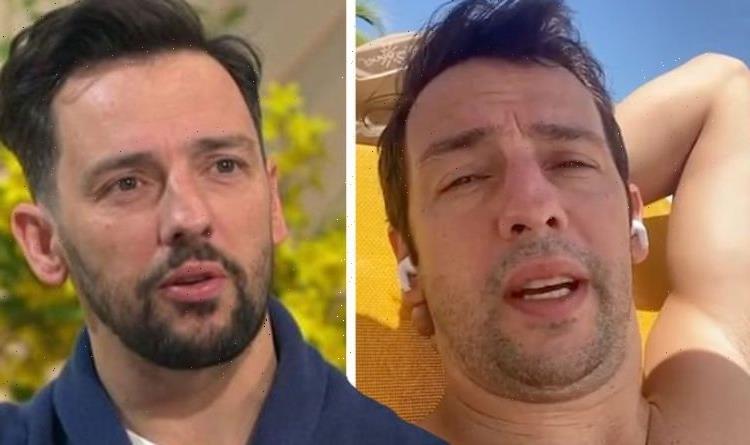 Ralf Little, 41, has been on a mission while filming the latest series of Death In Paradise on the idyllic island of Guadeloupe. Over the past few months, the actor has been doing God’s work by helping look after stray puppies that have been found.

Chiara has a slight problem

Ralf recently adopted one of the dogs, Dora, who he decided to take home with him in an act of kindness that sent fans through the roof with admiration.

And it seems he’s inspired others to do the same.

In a new latest video posted to Instagram, the DI Neville Parker star gave fans a “long overdue” update on the newest pooch they saved from the streets; one that found a home with a member of the production team.

Filming himself sunbathing on the beach, leaving viewers envious of the bright blue sky, he said: “Here’s a long overdue update on the pup that was rescued from the streets of Guadeloupe.

“She has been officially named Dèhè, which is the name of the town where we film Death In Paradise, where everything’s based.

And he couldn’t wait to tell fans the good news about her future.

“She’s been fully adopted now by my friend Chiara, who works in the office.

“Chiara has taken her on like an absolute legend and is going to take her back to Europe with her when we’ve finished the job.”

But while Dèhè has a long and happy path ahead with her new family, Ralf admitted there’s a slight problem with getting her away from the island.

“Chiara has a slight problem,” he sighed.

“I don’t know whether you watched one of my earlier videos, but it turns out the little dog and the local, random stray cat love each other.

“LOVE each other!” he exclaimed.

He reassured viewers that he wasn’t exaggerating, as the video cut to some footage of Dèhè and the feline known as Romeo, rolling around on the floor together.

Alongside his video, he captioned the post: “A little update on everybody’s favourite Guadeloupe stray (that isn’t Dora!)

“She’s officially been adopted by @chiaragoestohollywood and Dèhè has also made a best friend along the way… a very unexpected one too.”

“I told you guys we’d get her a forever home and she has now got one.”

While fans rushed to Chiara’s page to urge her to adopt Romeo as well rather than separate the pair, Ralf shared a post by his pal discussing the warning she’d been given.

“As much as I would love to take the cat back too, he is an adult, wild cat and after discussing this with vets and experts (I’ve never had a cat before), they all agreed that he would not cope with bring stuck in a flat in rainy Windsor,” she penned on her Instagram story, which was later shared by Ralf.

“So even though it breaks my heart to say, Romeo has to stay in Gwada for his own good.”

She jokingly urged Ralf, screenwriter Lindsey Ferrentino and actress on the show Josephine Jobert, to “stop being the devils on my shoulder” as she had to make the tough call.