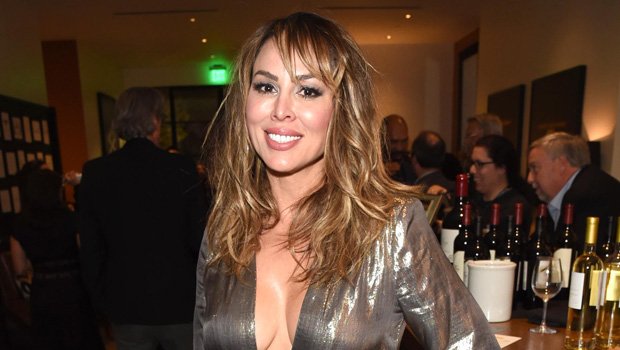 After declaring she was ‘done’ with ex-bf Dr. Brian Reagan only a week ago, Kelly Dodd is posting photos with her new man on social media — but her fans are saying she’s moving on too soon!

Kelly Dodd, 43, looks happy and in love in a spicy new Instagram photo posted on Friday, August 23! In the photo, Kelly cozies up to her new man, FOX News anchor Rick Leventhal, 59, on a romantic dinner date in London, UK. Rick lovingly places his arm around Kelly, who shows off her sexy body in a low cut magenta dress with spaghetti straps. “My 👑 Prince came across the pond to see me!!,” Kelly captioned the post. “@rickleventhal I am one lucky girl!! #london #princecharming #anchorman.” Kelly has been in Europe for at least a week, attending a wedding in Greece for her close friends Sanjay Sood and Doug Sharples and touring the glamorous islands of Mykonos and Santorini.

Kelly and Rick look dressed for the outing at Michelin-star restaurant Chiltern Firehouse, located inside André Balazs ritzy five-star London hotel of the same name. Rick posted another sexy snap of the duo, which features of the loved-up couple taking a selfie. In the second photo, Kelly puckers up for an air kiss as her handsome date looks at the camera. “The other angle of the first selfie with the incredible @kellyddodd,” Rick wrote.

The ‘Instagram official’ snap comes as a surprise, as Kelly only confirmed that her relationship with plastic surgeon Dr. Brian Reagan was over eight days ago on August 15. “@drbreagan_plastic_surgeon posted that we broke up .. I’m deeply saddened and I only wish him the best !! 😉 Good Luck ,, you are a talented surgeon!! I loved you deeply,” she posted at the time. The break-up has been filled with drama, with Brian denying that he cheated and Kelly referring to the doctor as an “a**hole.”

My 👑 Prince came across the pond to see me!! @rickleventhal I am one lucky girl!! #london #princecharming #anchorman

Fans quickly filled the comments section on Kelly’s Instagram photo, expressing shock that she’s already moved on after writing that she “loved” Brian and was “deeply saddened.” “Wtf thought you were heartbroken over the weird plastic surgeon guy?” one follower said. “Come on, seriously?? So fast 🙁,” another chimed in. A third slammed Kelly’s timing, but also expressed support, writing “I say this from a good place I promise. I think you need anger management and you would benefit so much from being secure in your own financial security rather than having to rush from man to man to financially take care of you. Hurt people hurt people and you hit so low below the belt on so many people you need to focus on learning to love yourself.”