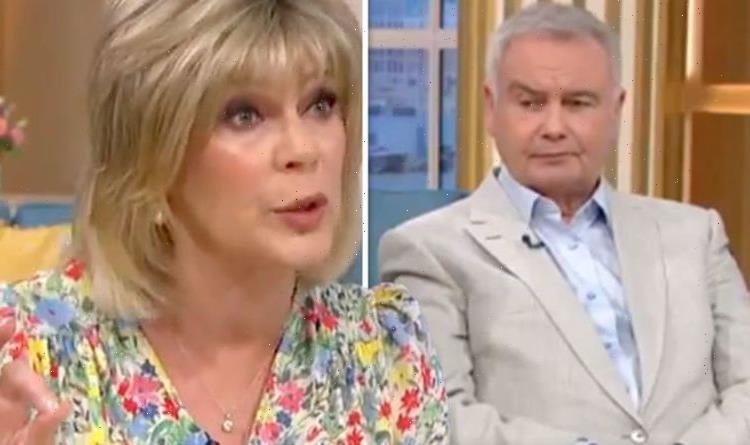 This Morning viewers were less than impressed today when hosts Ruth Langsford, 61, and Eamonn Holmes, 61, surprisingly got onto the subject of Christmas on a hot summer’s day. The couple chatted about Christmas shopping after hearing reports that parents had been encouraged to start searching for the most sought after gifts for their children as soon as possible due to the coronavirus pandemic.

Ruth broached the controversial topic first and said: “I’m the person who has said Christmas and it’s July.

“However, parents are being urged to look at what will be the most popular Christmas toys and do it now, because of delays because of the pandemic.”

Eamonn agreed with his wife, despite the discussion taking place a whopping five months ahead of the festive occasion.

Ruth then continued: “If you want the toy for Christmas, it’s not a bad thing to start thinking now.”

In the ‘This Morning’s View’ segment with Giles Brandeth, the Celebrity Gogglebox star said: “We’re doing it this year, because maybe, we’ve seen Mr Whitty, it may be cancelled.

“Better to have it on the 25th July, I’m getting it all done this week,” he quipped.

However, many This Morning fans were shocked that Eamonn and Ruth were speaking to Giles about Christmas in July.

“Parents are being urged to plan ahead this year, and to start thinking about the top toys now… but how early is too early?”

One fan fumed in response: “Oh good piling on the pressure earlier and earlier for parents to spend excess money.

“The shops start stocking everything from September that’s plenty early for those who want to buy early. Let us have summer in peace.”

Another argued: “Kids will probably change their minds at least 6 times before Christmas.”

A third person added: “This is far too early. Don’t think about Christmas until December!!”

A fourth penned: “Its clever marketing by ITV and advertisers. Put in in our mind then id bet money there will be a “must have toys ” section next week.

“Just let us enjoy the sun while it lasts an ill pop cash in cards at Christmas tyvm.”(sic)

A sixth added: “Don’t want to know about Christmas in July thanks #ThisMorning.”

However, another viewer pointed out: “Christmas in July has been a thing for many years amongst retailers and TV companies. It is when ideas start to form and promotions begin. TM, you are seriously behind.”

A second person agreed: “I start buying for my grandkids in January, I have a Christmas and birthday cupboard. You save a lot of money buying through the year.”