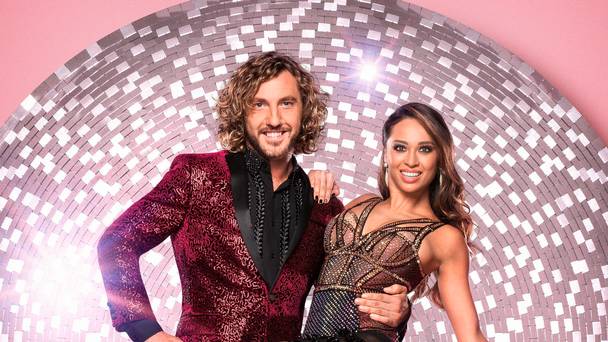 Seann Walsh has joked he is going to “hell” following Katya and Neil Jones’ split.

The ‘Strictly Come Dancing’ pro dancers confirmed on Sunday they had gone their separate ways after six years of marriage, 10 months after Katya and 33-year-old comedian Seann – who were paired up on the Latin and ballroom series last year – were caught smooching in the street.

Just hours after the pair’s split announcement, Seann referenced their break up during a show at the Edinburgh Fringe Festival’s Pleasance Dome.

According to the Daily Mirror newspaper, he told the crowd: “I am aware they announced they are splitting up. I have no reaction.” He then joked: “I will see you in hell.”

The ‘Bad Move’ actor also made a joke about being in bed with Katya after the photos of their infamous kiss were released.

He quipped: “On the Friday I am in the hotel so the paps can’t find me – secret location, very showbiz.

“I get into bed and ask Katya to pass me the remote.”

Katya took to Instagram on Sunday to share a joint statement from her and Neil confirming their marriage is over.

She wrote: “Hi everyone. As our fans and loyal supporters you are really important to us and so we wanted to let you know some news. After 11 years we have made the mutual decision to separate.

“We will always love each other, just in a different way as friends. This will never change what a great team we make and we are really proud of everything we have achieved together. “Our shared love of dance means we will keep working and dancing together as well as exploring individual projects. No matter what we do we will always support and respect each other.

“We wish one another every happiness and we will remain the best of friends. We are really looking forward to getting back to the ballroom and can’t wait to keep on dancing. Lots of love from us both xx (sic)”

Following their smooch, she and Seann publicly apologised.

Katya said: “I can’t apologise enough to everyone who it hurt and involved.

“But, the main thing, me and Neil are absolutely fine and that’s what matters to me the most right now and focusing on my job and doing it as professionally I can.”

And Neil later revealed he had forgiven his wife.

He said: “It was a shock. It was a major shock. I appreciated it of course that Katya told me so I found out from Katya before it appeared.

“Straight away for me I was more worried about Katya because I could see what was going to happen. It was a natural reaction.

“But that’s what’s wrong at the moment. We have been together for 10 years.