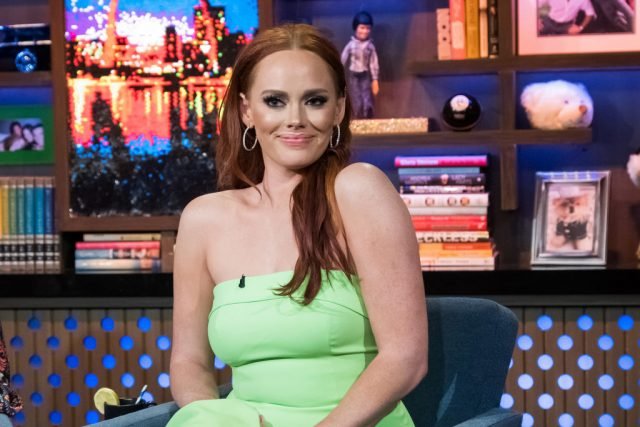 Southern Charm star Kathryn Dennis has been fighting her ex, Thomas Ravenel, for primary custody of their two children – Kensie and Saint – since last October, and the battle is starting to get vicious. In addition to Dennis’ mother getting involved and making shocking claims against Ravenel, he is fighting back with even more nasty accusations against his Dennis.

Kathryn Dennis’ mom, Allison, has filed an affidavit with the court to support her daughter in her custody battle, and at the beginning of the document she praises Kathryn for having such a “loving relationship with her children.”

According to The Blast, Allison says that Ravenel will doeverything he can to make it appear that she is the one who is taking care ofthe kids instead of Kathryn, but she says that it’s actually Ravenel who is notable to take care of them by himself.

She also shared other things that she would“like to forget,” including an incident in 2015 when she heard noises comingfrom the bedroom.

“Thomas came out afterward and left. I went to tell Kathryn something and she was dead asleep. When I was finally about to wake her up, she remembered nothing. My perception was that she had been drugged by Thomas,” wrote Allison.

After spending time with both Kathryn and Thomas and observing each of them with their children, the Guardian ad Litem in their custody case has issued a report. The Guardian says that Kathryn has issues with being on time, is disorganized, and has problems with money.

Kathryn Dennis admitted that she was havingmoney trouble after spending her SouthernCharm paycheck, and she is selling her clothes and furniture. She alsomoved out of her expensive downtown home and into the house her grandfatherleft her.

Despite Kathryn’s troubles, the Guardianbelieves that she can handle custody of the kids and doesn’t need supervisedvisits.

As for Ravenel, the Guardian voiced herconcerns over his drinking because there were witnesses who reported his“bizarre behavior after he consumes alcohol.”

When Kathryn Dennis filed for sole custodylast fall, Ravenel asked the court to deny her request and keep in place theircurrent 50/50 arrangement. However, the former South Carolina treasurer nowclaims that Kathryn recently failed a drug test and he wants full custody whileallowing Kathryn only supervised visits.

In June, the court demanded that both Thomasand Kathryn submit to blood, urine, and hair drug tests, and he says thatKathryn “produced a urine test positive for marijuana, benzodiazepines, andamphetamines.” He says that Kathryn has a prescription for the benzos andamphetamines, but the positive test for cannabis is a fail.

However, Kathryn says that her hair test wasnegative, and the positive urine test was because of CBD oil, which is a legalpart of the cannabis plant.

ThomasRavenel claims Kathryn Dennis had an abortion while in rehab

After losing custody of her kids back in 2016because she tested positive for marijuana, Kathryn went to a California rehabfacility, and Thomas says that she had an abortion while she was there when shegot pregnant “from some friend of his.”

Kathryn has finally addressed this claim andsays that there is absolutely no truth to it. She explained to the court thatThomas wanted her to get an abortion when she was pregnant with Saint, theirsecond child, but she refused.

She also explained her past marijuana use,saying that it helped her cope with depression and anxiety. When it caused herto lose custody, she went to rehab for 30 days. Kathryn Dennis says that theabortion claim is a “complete fabrication” and an attempt to defame her.

The judge in the case has yet to make adecision.