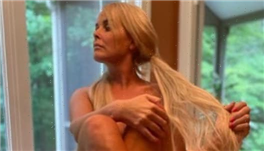 The 90 Day Fiance star is also a business owner and had credited her treatments for her general state of health — while also endorsing the vaccine.

It was a complicated case that threatened to become ugly this summer.

Now, the struggle is over, and Stephanie has agreed to apologize … with a catch.

“One of my attorneys that I’ve worked with for years, Edward Wolven, summed up the final Assurance,” she wrote.

“’As you will see in paragraphs 2.3 and 2.4,'” Stephanie quoted, “‘this assurance does not constitute an admission of ANY wrongdoing by Respondents…..'”

“‘The entry into this Agreement by Respondents is NOT an admission of ANY factual allegations or legal conclusions…..'” Stephanie’s quote concluded.

“This has been the worst thing that I’ve ever endured,” she expressed.

Stephanie wrapped up her caption: “I’m grateful for their willingness to admit their legal conclusions.”

The allegations from Attorney General Dana Nessel alleged that Stephanie had made misleading claims about her sermorelin injections.

The AG’s investigation was launched after Stephanie noted that her friends had gotten COVID-19, but she did not.

“So, I’m thankful and now I’ve been vaccinated so I will not get it ever now,” Stephanie said earlier this year.

“So I’m so grateful,” she allegedly added, “and I’ve had people tell me in the medical field that it is probably due to the ipamorelin/sermorelin.”

That is obviously not a direct claim that her regular treatments prevent or cure COVID-19.

One could credit many things, accurately or inaccurately, for a robust immune system.

At the same time, one can understand any state government being extremely careful when it comes to any discussion of this deadly virus.

Now, months after the Michigan AG called her out, the situation has been resolved.

Stephanie has signed an assurance of voluntary compliance.

This comes with strings attached.

She also must add language to the website for Skin Envy to warn customers of potential side effects to the injections that she promotes.

Additionally, Stephanie must pay $4,000 to the attorney general’s office to cover the costs of the investigation.

“And,” the AG continued, “it is my hope it can serve as a reminder that my office takes misleading and false claims related to consumer products very seriously.”

It certainly gained the office some attention, both positive and negative, as 90 Day Fiance is an international series with millions of fans.

Stephanie’s caption that accompanied her nude photo was not the retraction, which is required to have specific language.

“Ipamorelin/Sermorelin injections do not treat or prevent COVID-19,” it must read.

“And,” the disclaimer must continue, “have not been evaluated by the Food and Drug Administration for the treatment or prevention of COVID-19.”

“Skin Envy apologizes if any customer concluded otherwise,” the statement must conclude, under the agreeement.

Additionally, Stephanie cannot use the video of the interview where she made those alleged statements to be used in any advertising.

Notably, no part of this appears to admit to any guilt or wrongdoing on Stephanie’s part — disclaimers are not admissions.

We don’t know the legal ins and outs of this, but presumably the attorneys involved all do.

We can say that we are glad that this was resolved.

Stephanie was a polarizing figure on 90 Day Fiance, but fans would hate to hear that she’s a “scammer” or that she was being railroaded by a crazed AG.

It’s heartbreaking to hear that this is the worst thing that Stephanie has ever experienced.

After all, this is a woman who was sexually assaulted in Belize, after which production continued to film her during unflattering moments.

Stephanie’s eccentricities are fun to watch on social media, and hopefully the resolution to this unpleasantness means that she will get back to regularly posting.