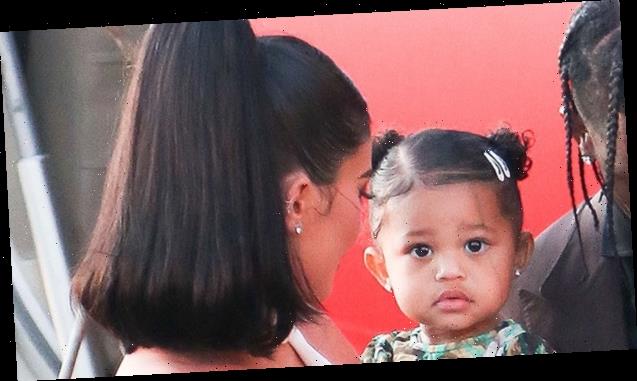 Stormi Webster is such a good swimmer! Kylie Jenner revealed her 2-year-old ‘fully swims’ as she showed off a somersault in the water.

Kylie Jenner, 23, just posted the cutest videos of daughter Stormi Webster swimming! The 2-year-old was so eager to jump into the swimming pool at Kylie’s $36.5 million resort-style mansion, she didn’t even have patience to get her swimsuit on! Stormi hilariously tip-toed barefoot towards the water, and her mom quickly realized she had other ideas.

“No, no, no — I know what you’re doing,” Kylie sternly instructed her toddler in the Oct. 25 videos, who played it coy. “I just want to put my feet in!” Stormi replied, sounding so grown-up as she used a full sentence just like in her Halloween cookie video. The Kylie Skin founder wasn’t convinced, as she replied “I already know where this is going.” Stormi looked so cute as she showed off her natural curls for a casual morning at home, taking a seat at the edge of the water.

“I want to get into the pool with my clothes!” Stormi, rocking a pink pair of pajamas, then declared as she proceeded to jump in. We were so impressed by her swimming skills as she dove in then did an expert somersault in the water. Perhaps Stormi has a career as an Olympian in her future? “She fully swims,” Kylie informed her 198 million followers. She can say that again!

Stormi has been a water baby since the day she was born, and loves pool time with her mom and dad Travis Scott, 29! The AstroWorld rapper captured the sweetest moment of Stormi jumping up and dancing to the Trolls soundtrack over Easter weekend (FYI, Trolls is Stormi’s favorite movie). Stormi — sporting an adorable white swimsuit — and Travis enjoyed a father-daughter swim session at grandma Kris Jenner‘s luxe Palm Springs estate.

Although Travis and Kylie split a year ago, the exes have maintained a close relationship as they co-parent their daughter. The pair stepped out for dinner at hotspot The Nice Guy in June, and sources previously told HollywoodLife EXCLUSIVELY that the pair “act together” while in private. They kept the rumor mill going with two super sexy photos before a night out on Oct. 25.

dress up with @matthewmwilliams @givenchyofficial 🤍 this collection is wow 🤤🤤 congrats !!! can’t wait to see more. ✨✨

The Kylie Cosmetics CEO stunned in a sheer Givenchy gown covered in crystals as she posed against a wall with a shirtless Travis. “Dress up with @matthewmwilliams @givenchyofficial this collection is wow,” she captioned the photo as followers — including sister Khloe Kardashian, 36 — were loving the snaps. “ABSOLUTELY SHOOK TO MY CORE,” the Good American founder gushed on the photos.