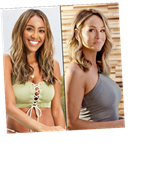 In case you haven’t heard, President Donald Trump has tested positive for the coronavirus.

How is this relevant to news about The Bachelorette?

Well, Trump is a former reality television star. But also…

… such a bombshell ought to prove that nothing about events in 2020 should take anyone by surprise.

And yet: You may want to sit down upon reading the following update about Clare Crawley’s upcoming season of The Bachelorette.

As you undoubtedly have read by now via a numner of The Bachelorette spoilers around the Internet, Crawley only lasts about three or four rose ceremonies as the anchor of the series this fall.

Because she falls SO hard for suitor Dale Moss that she sees no point in continuing with the charade of seeking a potential husband on the show.

Why go on and pretend anyone has a shot, you know?

According to initial reports, Crawley locked herself in a hotel room and refused to continue shooting at one point because she just wanted to go home and be with Moss.

This is allegedly when producers panicked and scrambled to bring in Tayshia Adams as a replacement to finish off the season.

Someone VERY close to production has now shot down these claims, however.

Yes, we’re talking about Reality Steve, the most reliable Bachelor and Bachelorette insider on the World Wide Web.

He always knows what’s up with production on these programs — and he now says “Crawley refusing to film, locking herself in closets, and quitting the show to be with Dale aren’t correct.”

Steve alleges that Crawley did, indeed, “snoop” at the social media profiles of many contestants.

She was therefore interested in Moss before arriving on the quarantined set of Season 16, but she never actually met or spoke to Dale prior to getting there.

However, it soon became “impossible to hide,” Steve says, that there was a spark between this suitor and Crawley.

Producers noticed and it was then THEIR IDEA TO REPLACE CRAWLEY WITH ADAMS IN ORDER TO BOOST RATINGS AND GARNER ATTENTION.

“I can report to you that this was in productions plan before Clare’s season started.

“They knew Clare would be removed at some point during this season and replaced as the Bachelorette by Tayshia. Did Clare know? No. Did the guys know? No.

“But production sure as sh-t did.

“So Clare falling for Dale early, something production had a sense would happen due to conversation with Clare pre-show and them knowing she was into him, this was gonna be their “twist” from this season.”

But it makes some sense, considering the ways in which Chris Harrison and company have teased this twist in a clear attempt to drag out the reveal for as long as possible.

Clare, of course, was happy to agree to this deal, Steve adds, because she got to be with Dale Moss.

And that’s all that mattered to her in the end.

“Bachelor Nation and the world are not ready for what happened inside the [bubble],” Harrison recently said, referring to the show’s quarantined set in Palm Springs.

“It is unlike anything we have ever seen on this show before. I know I say that sometimes, but I truly think we have outdone ourselves this time.

“I think it definitely goes up on the Mount Rushmore of wild seasons of Bachelor and Bachelorette.”