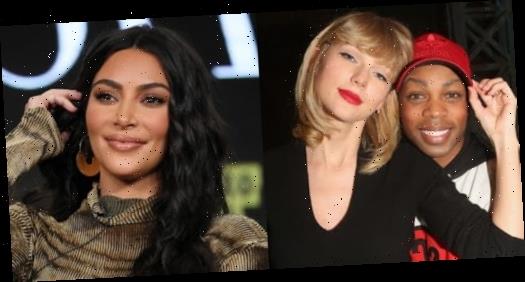 Sometimes, beef has no expiration date.

That certainly seems to be the case with Kim Kardashian and Taylor Swift, whose never-ending feud reared its ugly head yet again this week.

As you may recall, Taylor took issue with lyrics in Kanye West’s 2016 song “Famous.”

She had every reason to do so, as West called her a b-tch and suggested that she owes him sexual favors.

Anyway, Kim called Taylor out and claimed that Swift okayed the lyrics prior to the song’s release.

Video that leaked this week, however, revealed that Kanye only shared a heavily redacted version of the lyrics with Taylor, making a point of leaving out the line in which he calls her a b-tch and takes credit for her career.

Kim tweeted about the renewed controversy this week, and some fans were surprised by her failure to admit any wrongdoing or apologize to Taylor.

“[Swift] has chosen to reignite an old exchange – that at this point in time feels very self-serving given the suffering millions of real victims are facing right now,” Kim wrote, obviously referencing the coronavirus pandemic.

One of the offended followers was Taylor’s longtime friend, singer Todrick Hall, who absolutely went off on Kim in a lengthy social media post.

“I CANNOT STAND THIS WOMAN! Kim Kardashian posted these on her story, and clearly is still missing the point,” wrote the former American Idol contestant.

“1. Taylor didn’t reignite anything, Kris probably leaked this footage her damn self,” he added.

“2. After your Ray J video and publicly documenting every crevice of your vagina … I HIGHLY doubt that you’re embarrassed NOW to respond to this.”

From there, Hall insructed Kim to “just apologize, you self absorbed entitled, stubborn little queef,” a remark that Swift — on outspoken feminist — likely did not approve of.

Hall noted that Swift was “CLEARLY uncomfortable” during her call with West, adding, “If they had time to shadily record all this footage, they had time [to] shoot over an email with the finished product for approval once the song was done #standard.”

Hall then turned to Kanye, urging the rapper to “show those cakes … if you’re going to force the women in your video to be naked. Double standard and just SHADY BOOTS DOT COM!”

He then accused West of using “other celebs with more fans and relevancy to help promote his album,”

From there, Hall stated that he’s not surprised Kim was able to move on from the mess, as she wasn’t “the one who lost sleep over this and had people sending her snake eomjis for YEARS. This was online bullying at the HIGHEST LEVEL & she has faces zero consequences.”

“Would it be SOOO difficult for her to just say ‘I’m sorry Taylor. I didn’t think about the fact that we didn’t tell you you were being recorded,'” he wrote.

“‘We called you out of the blue asking you to promote my husbands music THAT ISN’T YOURS after he’s acted like a damn good in front of millions and hasn’t publicly apologized,” Hall continued.

“I don’t make music and I never thought of how this put an even larger target on your back than there already was and for that I apologize. Hope we can be friends in the future.'”

Finally, the singer signed off with some of his most brutal comments.

“Wash your hands everyone, not just for Corona but for filthy dirty shady lying crusty rat-snakes doing shady things out here in these pandemic streets,” he added.

“You did indeed edit the footage miss thing … kind of a concept you should be very well acquainted & familiar with as you’ve done it not only to this footage but your butt, your face, your hair, the list goes on.”

Again, we imagine — and hope — that Taylor would take issue with an associate of hers going nuclear on a mother of four like this.

There are ways to defend your friend without resorting to slut-shaming and name-calling.

Taylor may be morally in the right in this situation.

But she can really prove she’s the bigger person by publicly urging Hall to tone down his rhetoric.