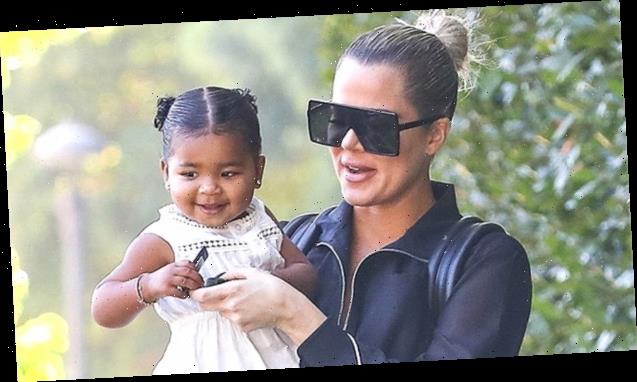 True Thompson‘s video-bomb in mom Khloe Kardashian‘s latest Instagram clip is the best thing you’ll see all day! In honor of Poosh‘s new online shop, Khloe attempted to film a series of Instagram Story videos congratulating her sister Kourtney Kardashian and the Poosh team — until True showed up. The 2-year-old hilariously crashed Khloe’s dedication, and it made the moment even more special!

“I am so proud and happy for the Poosh team and my sister Kourtney. I know how hard it is to start a business, let alone an e-commerce business and in times of this pandemic and this crazy world,” Khloe began, before telling fans to “go and check it out!” — That’s when True’s little voice chimed in.

“Me!,” she yelled. “Do you want to say hi? Say hi!,” Khloe gushed to her daughter. An excited True then popped in the frame to greet her mom’s 123 million Instagram followers. True, whose bouncy girls moved with her, was all smiles as she waved to the camera. The little fashionista looked too cute in a white dress with a bow on the front.

During a second attempt at filming a tribute to Poosh‘s online store, Khloe admittedly “failed” once again. In the first few seconds of the clip, True entered the room to give her mom some eggs. While she wasn’t in the frame the second time around, Khloe made sure to illustrate what was happening behind the scenes.

“I tried filming this too many times,” she wrote on top of the clip, adding that “True wouldn’t let me liiiive.” Khloe added, “True I’m filming something for Auntie Kourt,” to which she replied, “What?”

The Good American founder continued to film her series of Poosh clips, although she admittedly lost her train of thought. See — stars really are just like us!