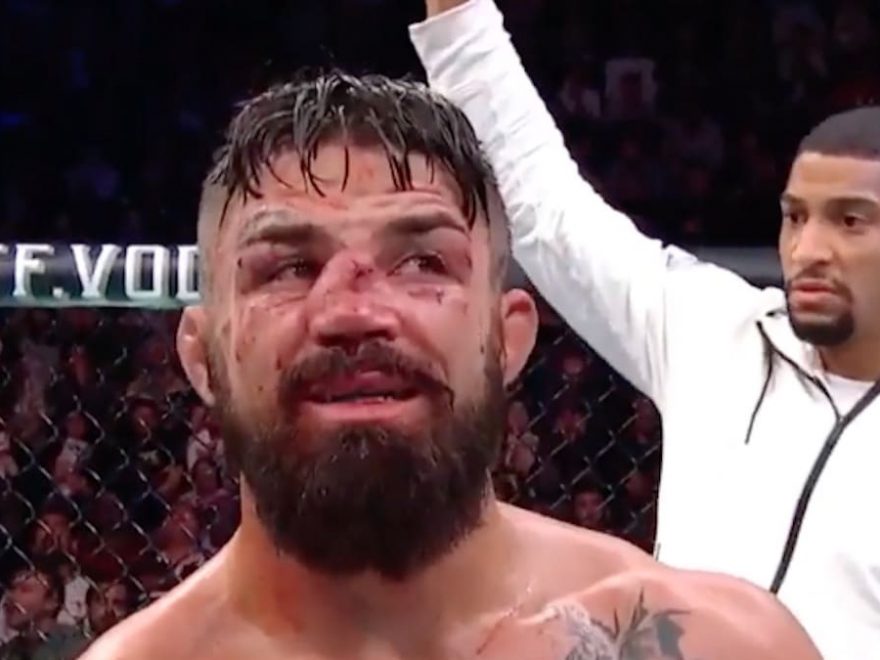 At the recent UFC Fight Night Uruguay event, Mike Perry not only suffered a loss to opponent Vincente Luque, but came away with a nasty injury as well. Photos and video of Mike Perry’s broken nose are now making the rounds, showing exactly what happened to the MMA fighter’s face this past weekend.

Perry was facing Vincente Luque as part of Saturday’s UFC Uruguay card. The two fighters lasted throughout the entire bout which meant plenty of blood was spilled. On one particular sequence, Luque connected with a brutal knee shot to Perry’s face. That powerful connection ended up breaking Mike Perry’s nose, as seen in the video clip below.

In the GIF below, a trainer attends to Perry’s injury, clearly a broken nose. Despite the injury, Perry didn’t go down, nor throw in the towel. That’s the nature of the beast and Perry is clearly one who doesn’t give up.

Both fighters were bloodied as early as the second round. In the third, Luque put a guillotine hold on Perry which caused a noticeable amount of blood to pour out of Perry’s face. He not only had the broken nose but also cuts sustained during Luque’s other strikes or knees.

It was a tasty knee

Following the fight, Mike Perry was taken to hospital for further treatment. According to an Ariel Helwani tweet, an hour of surgery helped set things straight. Helwani also noted that Perry will be unable to have any contact on the nose for six months, so that rules out fighting and possibly training too much in that timespan.

Adding insult to injury for Mike Perry and his team was also the UFC fight’s result. The fight went the distance but unfortunately for him, the judges awarded it in favor of Vincent Luque, 29-28, 29-28, 28-29. However, a lot of fans, along with Perry and his team, believe they were the winning side.

Despite losing and having his nose broken, Perry seemed to take things just fine, as he posted to his Instagram with a caption reading “Still can’t knock me out” as he flipped double birds in the shot.

The fight also earned Fight of the Night honors with the event shown live as part of UFC on ESPN+ this past weekend. Perry earned a $50,000 bonus despite loss and injury. It also earned him more respect despite taking the loss, as fans saw just how much punishment he takes while he just keeps on going.