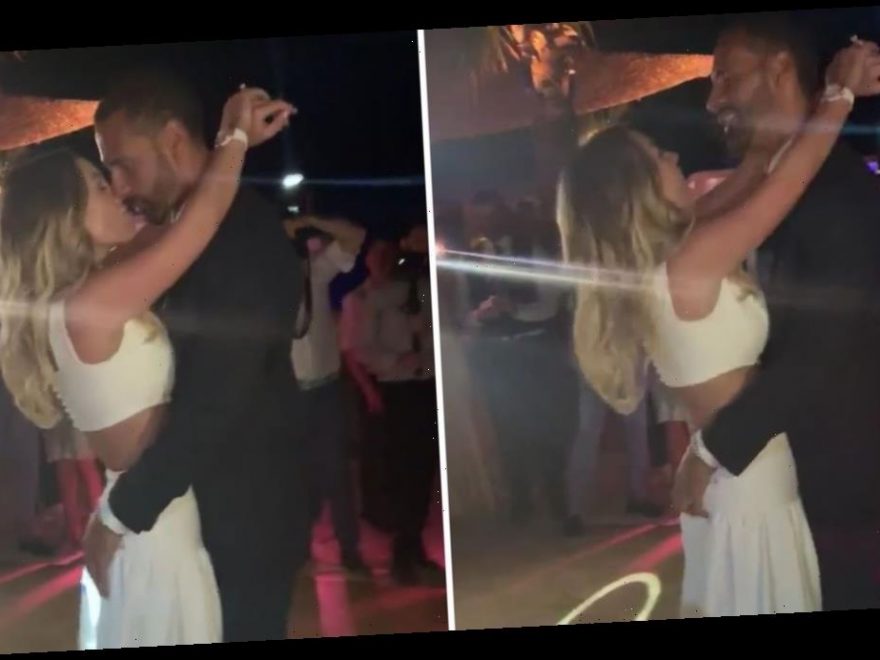 Kate Wright and Rio Ferdinand tied the knot in a stunning ceremony in Marmaris, Turkey, in September 2019.

OK! magazine published the exclusive pictures from the wedding, which took place at the D Maris Bay hotel, situated on the beach.

And while their wedding day was a day of dreams, the ceremony looked like so much fun. Videos of the former TOWIE star, 29, and ex-England footballer, 40, emerged from guests shortly after their big day, including a performance from MIC LOWRY, a British vocal harmony boy band from Liverpool.

It also showed the newlyweds cutting their glorious seven-tier white wedding cake which was decorated with a spiral of pink and white flowers.

In our exclusive images, we showed the first glimpse of the couple’s first dance in front of the friends, family and guests in attendance in Turkey.

This video shows the couple dancing to an R&B song which has live sax being played along with it.

The couple share a steamy kiss during their first dance as the reality TV star wraps her arms around the pundit’s neck.

Kate and Rio’s wedding day was filled with special moments which included the sportsman’s daughter Tia, eight, being Kate’s maid of honour and his boys Lorenz, 13, and Tate, 11 walking her down the aisle.

Rio also had a secret performance planned for the evening party, surprising his new bride with her favourite R'n'B singer, Ashanti.

Rio Ferdinand and Kate Wright wedding: ALL the photos from stunning wedding which reveal every incredible detail

The singer was flown in from America especially to sing to the new Mrs Ferdinand, performing a number of her hits including So Into You, Always On Time and What’s Luv?

Kate posted the unforgettable moment on her Instagram writing in the caption: “When u think the day couldn’t get any better and your husband surprises you with @ashanti …. wow.”

In an interview with OK! Magazine, Rio told us that he “wasn’t looking for someone” when he met Kate, but he believes “fate” brought them together.

Rio said: “I definitely wasn’t looking for someone at that time. I didn’t think it was possible, I wasn’t open to bringing someone in to become a stepmum to the kids.

“I knew Kate was special from the moment I met her, it was pretty instant, but seeing her with the kids cemented everything, that was a huge part of it for me.

“So many pieces of the jigsaw have to click together for it to work and the wedding was the final piece.”

Kate was equally smitten with Rio when she met him, and she gushed: “The night I met Rio I knew I was going to marry him. I met him and we just clicked straight away."

She continued: "We didn’t kiss or anything but I went back to my room that night and I told all my friends that I’m going to marry him. And here I am, I just knew.

"You know when you just click – we both felt it and have talked about it since."