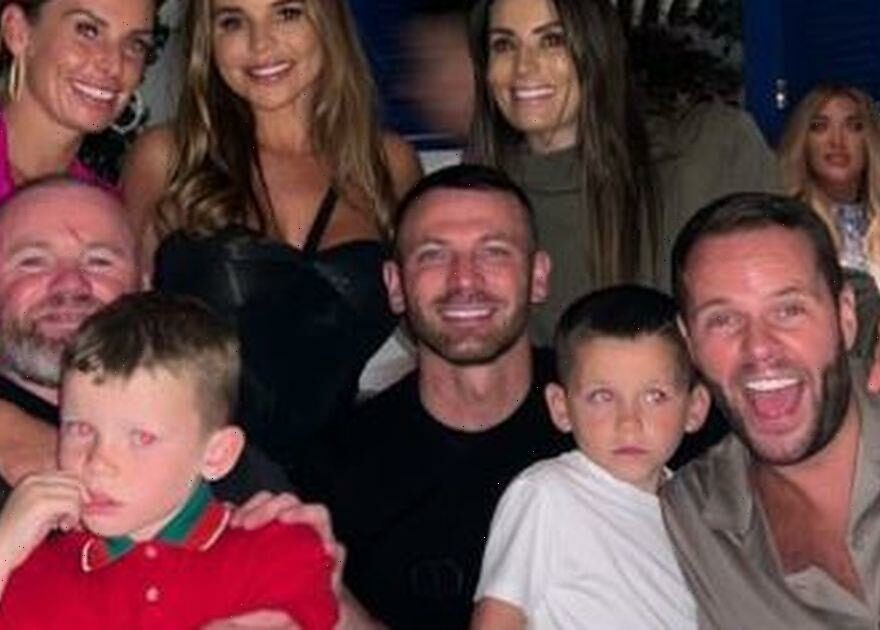 Wayne and Coleen Rooney had one hell of a night as they were pictured partying in Dubai, resulting in Wayne cutting his head open on a piece of flying plate.

The Rooney’s were in Dubai with friends Tanya Bardsley and her husband Phil as they shared pictures and video from their night out.

In one clip, Wayne, 37, can be seen dancing in the Greek restaurant Opa, which is famed for its plate-smashing ritual.

With bits of plate flying off in all directions, the second shot shows Wayne nursing his injured head after presumably coming into contact with a piece of plate.

Thankfully, the group seemed in high spirits despite the injury, dubbing it the “funniest thing” they’d seen.

A third clip shows Coleen, 36, resting a shot glass on her head as a nearby waiter pours the alcohol in which was followed by a victorious “Opa!” once the drink had been poured.

A third video posted to Tanya’s feed shows the group waving napkins while standing on their chairs.

All in all, the group seems to have had a cracking night, despite the injury.

Fans shared their thoughts in the comments, with one penning: “These videos have made my day!!!! I can not cope!”

Another said: “Brings back wonderful memories for me. Went here when our in Dubai visiting our son. It was a great night out.”

A third added: “Fantastic night had by all, by the looks of it.”

It was recently revealed that the infamous “Wagatha Christie” trial will be making its way to the West End.

Vardy v Rooney: The Wagatha Christie Trial has been adapted from a High Court transcript by Liv Hennessy and will be directed by Lisa Spirling.

In the trial, which gripped the nation earlier this summer, Rebekah Vardy, 40, lost a libel battle against Coleen over a viral social media post after a High Court judge found it was “substantially true”.

In the post, which went viral in October 2019, Rooney said she had carried out a months-long “sting operation” and accused Vardy of leaking “false stories” about her private life to the press.

Her sleuthing efforts saw her dubbed “Wagatha Christie” in reference to the popular mystery writer.

The upcoming “verbatim production” will seek to reveal what went on behind the closed doors of the courtroom.