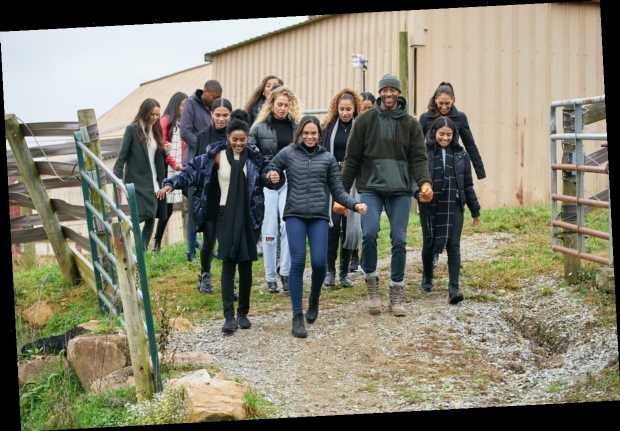 The Feb. 1 episode of The Bachelor ended with quite a bit of drama between two of Matt James’ contestants, MJ Snyder and Jessenia Cruz. That means the following episode on Feb. 8 picked up right where that episode left off, and things only got more intense from there. So, who goes home on Matt’s Bachelor Week 6? Matt’s search for his future wife is heating up.

Week 6 started off with MJ and Jessenia tensely waiting for their 2-on-1 date with Matt. MJ was still upset about Jessenia calling her an "antagonist" of the house and told Matt she coined the term "varsity versus JV" after new women joined the cast.

Although Matt noted that both women made valid points, it was time for one of them to go. "MJ, our connection is undeniable. And I felt that since the first time we spoke. And I’ve really enjoyed all of our moments together, just being real. Jessenia, you said from Night One that you wanted someone to be your rock, you were willing to be that, and I feel that," he said. "MJ, I can’t give you this rose."

So a stunned MJ headed home, as Jessenia walked away with the 2-on-1 rose. "It didn’t have to come to this. MJ had every opportunity to own up to it," Jessenia told the camera, gushing about Matt’s support of her. But dealing with even more drama in the house clearly weighed on Matt, and he chose to cancel the night’s cocktail party.

Things are definitely getting more serious as the Season 25 competition shrinks. And since Abigail, Kit, Jessenia, and Rachael already had roses by this point, that meant even less women would get them at the actual rose ceremony. Here’s who else was saved:

Ultimately, three contestants were sent packing: Brittany, Ryan, and sweet fan-favorite Magi. "It’s tough. I’m sad, but be has no idea the love I have, how much love I can give," Magi told the camera. "My person is definitely out there, and I cannot wait to meet him." Ryan took it harder, sobbing, "I really wanted that chance! I just feel like I was too late."

Even though the second half of the season is underway, there’s still plenty of drama looming over Matt’s Bachelor season. Between Serena C. and Katie’s fight over her being there for the right reasons to Heather Martin’s unexpected arrival, Bachelor Nation knows by now to expect the unexpected.