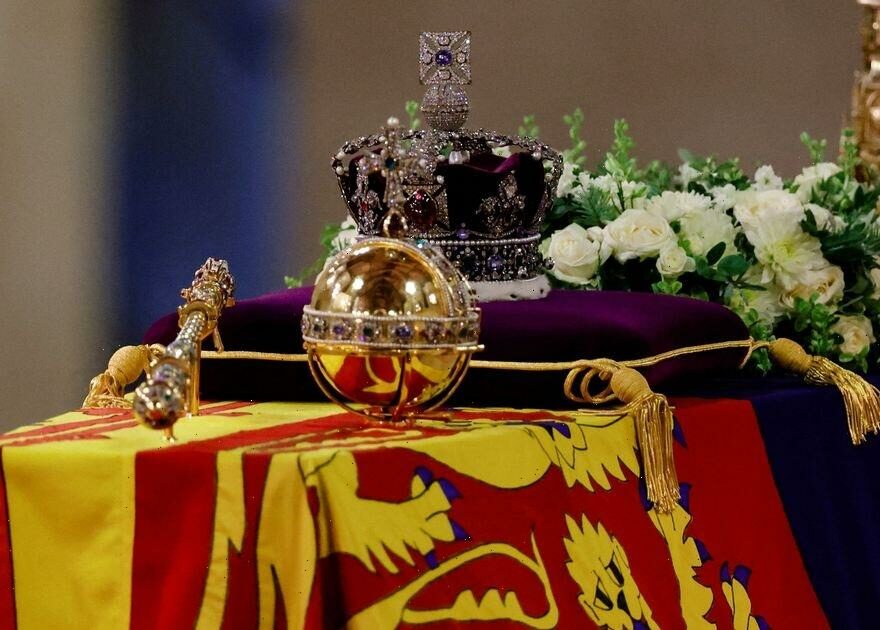 The Imperial State Crown, orb and sceptre were placed on top of Queen Elizabeth II's coffin for the duration of her state funeral, and it turns out the objects were actually screwed down to prevent any mishaps.

Each object was bolted to Her Majesty's coffin to ensure that they could not fall off, after her grandfather, King George VI, had his crown fall from his coffin.

In 1936, his bejewelled Maltese Cross fell onto the ground during his funeral procession, and it was said to have been a bad omen after his son, Edward VIII, abdicated causing a constitutional crisis.

Following this mishap, the crown, orb and sceptre were tightly fixed onto the Queen's coffin while she was lying in state and during her state funeral.

The three objects were later removed from Her Majesty's coffin during the committal service at St George's Chapel.

The Crown Jeweller removed the crown, orb and sceptre to mark the end of her public service and she then entered the royal crypt as a 'simple Christian soul' rather than a monarch.

The removal of the Imperial State Crown was especially significant, as back in 1953 it was taken from the altar and placed on to Queen Elizabeth II's head to mark the beginning of her historic 70-year reign.

King Charles III, 73, then placed The Queen's Company Camp Colour of the Grenadier Guards on top of her coffin, and the Lord Chamberlain 'broke' his Wand of Office and placed it on to the coffin too.

This 100 page tribute looks back at the life of our most beloved monarch, Queen Elizabeth II, marking key events during her remarkable 70-year reign, as well as her childhood as a young princess, her enduring love for Prince Philip and her family, and the lasting legacy she leaves our nation.

This edition is available to buy in stores now or it can be purchased online here.

The family’s website said it was conducted by the Dean of Windsor, adding: "The Queen was buried together with The Duke of Edinburgh, at The King George VI Memorial Chapel.”

The Royal Family are now observing their own period of mourning, which will end seven days after the Queen's funeral.

During this time, members of the Royal Family are not expected to carry out official engagements and flags at royal residences will remain at half-mast until 8am after the final day of royal mourning.

When the Royals entered a royal mourning period in 2021 after the death of the Queen's husband, Prince Philip, the family continued to attend suitable engagements and when appropriate, they wore mourning bands.

A mourning band is a black armband that signifies that the wearer is in mourning or wishes to identify with the commemoration of a family friend, comrade or team member who has died.

The royal period of mourning for Queen Elizabeth II will come to an end on Monday 26 September.