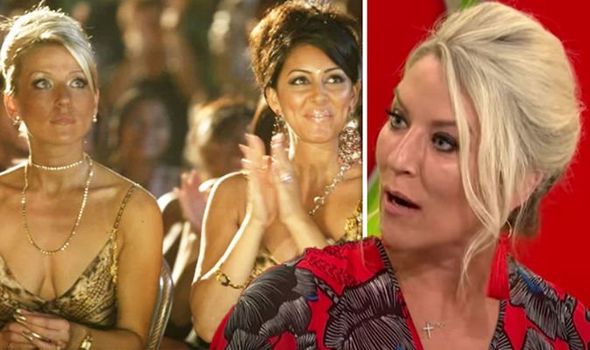 Actress Zoe Lucker, 47, has revealed she has some doubts about how Footballers’ Wives will “translate” to new viewers who have never seen the ITV drama before. Zoe spoke out on her concerns in an exclusive interview with Express.co.uk, before the hit show returned to our screens via BritBox this week.

The series, which followed the fictional Premier League club, Earls Park, its players, and their wives, aired between 2002 and 2006.

Footballers’ Wives was loved by viewers at the time for documenting the thrilling lives of the Wags.

The show was full of racy scenes, deception, cheating, jealousy, and even murder.

It has become BritBox’s most requested series since the streaming site launched back in 2019.

However, Zoe, who played Tanya Turner in the series, recently admitted she doesn’t know whether the series will be “appropriate in this day and age”, ahead of its launch on BritBox.

The actress said: “Something we’ve been thinking about is how that will translate now, you know, because back in the day, there was no social media and no streaming.

“So it’s going to be interesting whether it still is appropriate in this day and age, for this generation, whether they’re going to love it and enjoy it as much as our generation did.

“Because I think it did come at a very specific time, the whole wives and girlfriends thing, and everyone was really into the football and fascinated by the lives of footballers and their wives.

“I know they still are, obviously, to this day, but it was kind of at the very beginning of all of that, which was why there was a massive buzz at the time.

“It’ll be interesting to see the reaction that we get and whether this generation gets as excited as we all did,” Zoe explained.

The former EastEnders star went on to share her hopes that new audiences will embrace some of the series’ more outlandish storylines.

She admitted: “I do not know what they’ll make of it.

“I’m hoping they’ll take it the way that our original audience took it.

“We weren’t making documentaries, we were making TV which was within the realms of Earls Park, the Football Club, and all those different characters.

“I think I’m hoping what they’ll do is, they’ll enjoy the characters and enjoy the storylines.

“They will make them laugh, and there are certain storylines that will make people sad.

“But I think in general, I’m hoping they’ll take it the way we took it and just enjoy it.”

Tanya played a key part in many storylines, which involved Jason’s infidelities.

Tanya was often seen by viewers busy plotting her way to the top of the pecking order.

Footballers’ Wives and Extra Time are available on BritBox.