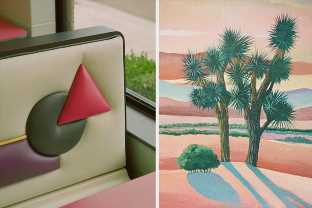 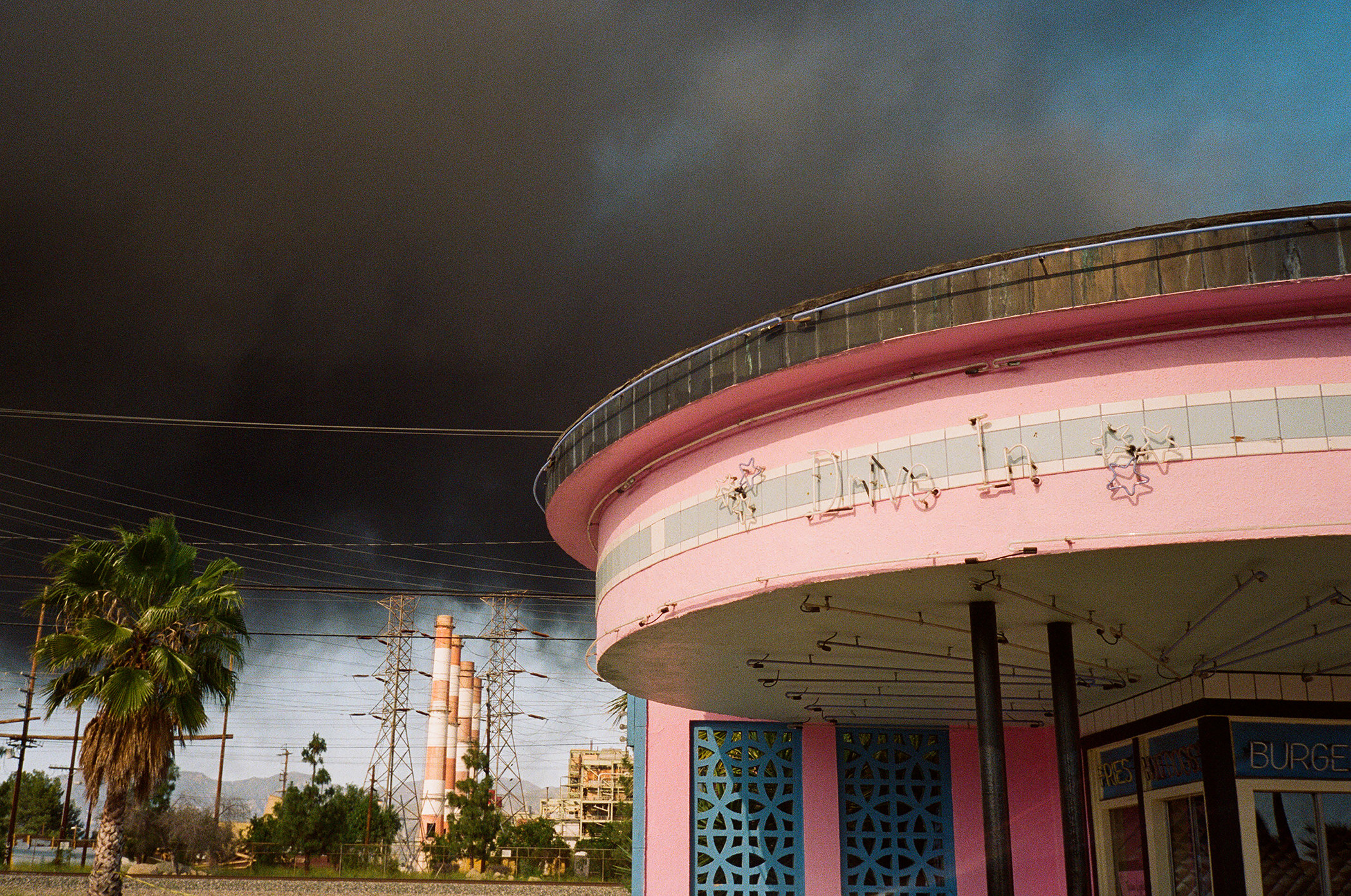 Phil Donohue is a photographer and filmmaker based in Los Angeles whose work highlights once-popular aspects of American culture that are often discarded in favor of newer design trends.

In Donohue’s vision of America, the shopping mall, once ascribed such high cultural value, has since depreciated to only a shell of its former self. Mid-century malls left quiet and desolate, restaurants and businesses adorned in fading pastels from the ’80s and ’90s, and geometric patterns that once caught the eye of yesterday’s shoppers are the focus of his book I Dreamed It Was Better Than It Was. In these pictures, nostalgia runs deep and the past is allowed one last opportunity to charm an audience before fading into history.

Here, Donohue shares with BuzzFeed News a selection of his photographs and his perspective on the disappearing culture of yesteryear.

What are the concepts behind I Dreamed It Was Better Than It Was, and what are you searching for in a photograph?

In a lot of ways, these are portraits of forgotten spaces and the sometimes lone people who inhabit them. I look for something that I fear won’t survive our current view of progress — and a lot of what I’m drawn to does seem to disappear shortly after I make an image, so I’ve learned to trust my instincts there. 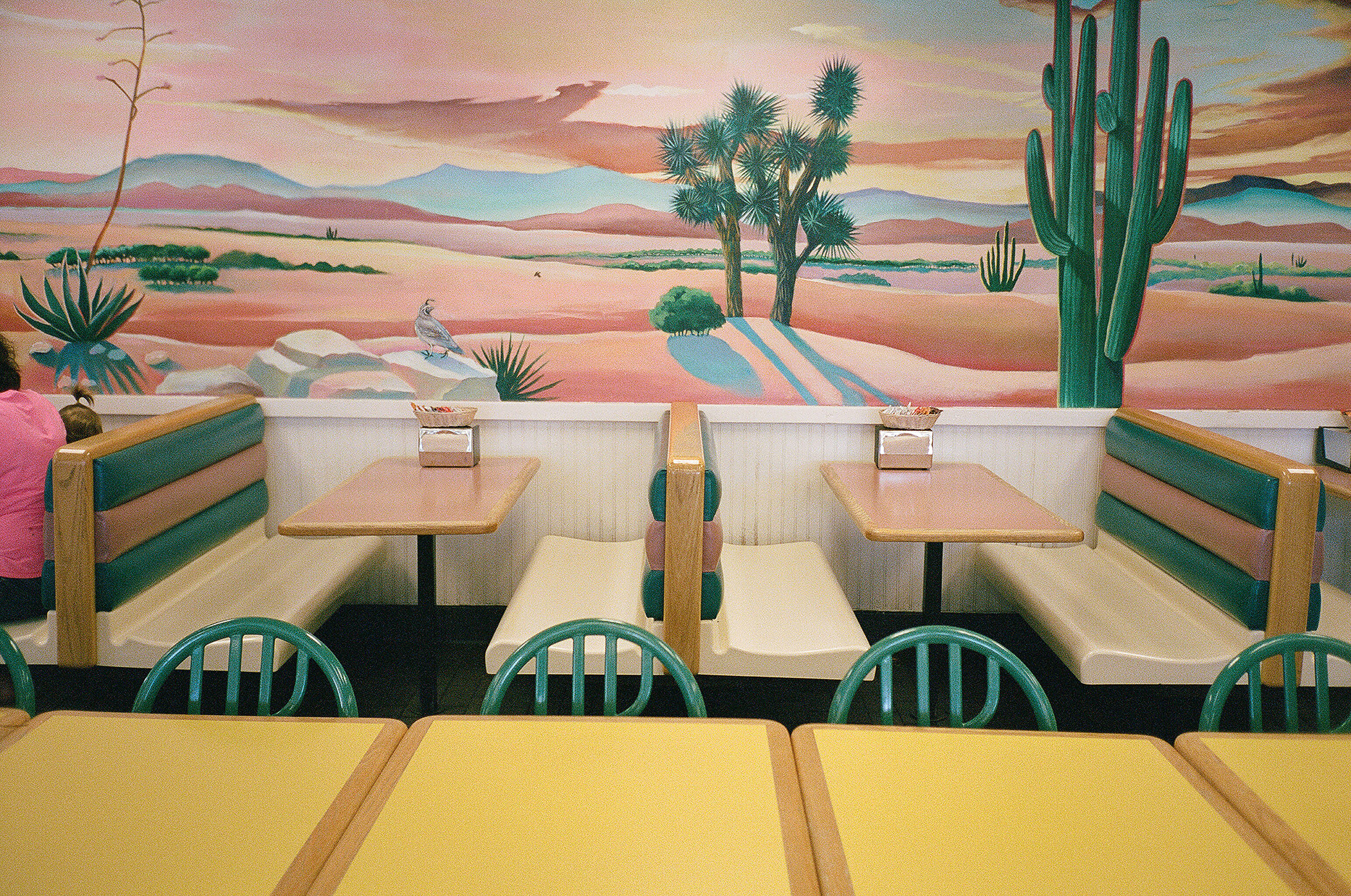 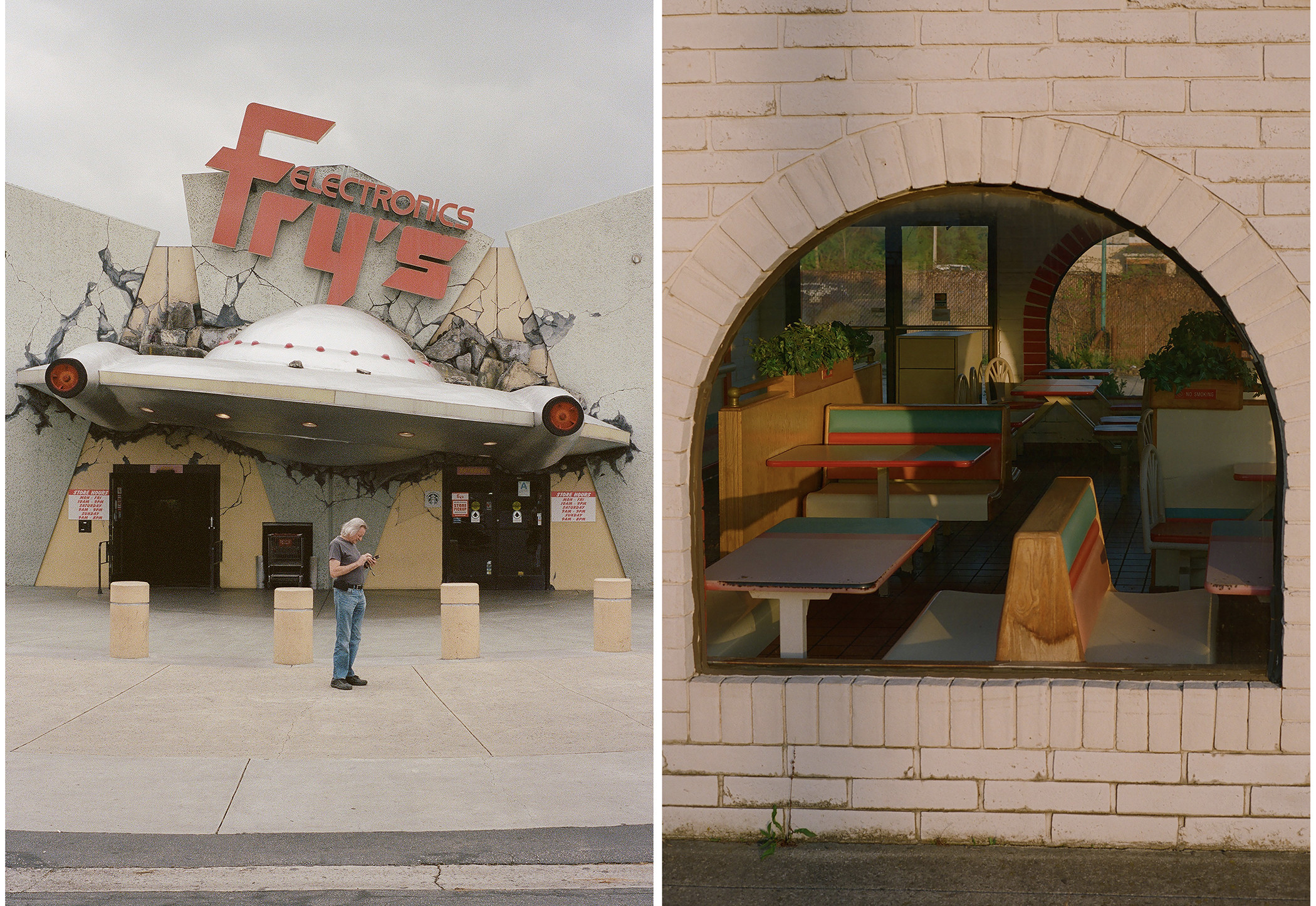 I’ve always had a camera on me, whether I was filming or shooting, but I only really started focusing on this type of work around 2006, and even then, it was only a personal exploration, nothing I ever considered sharing in any kind of meaningful way. It was around 2011 when I started to contextualize and share the work.

In what way is this project personal to you?

My parents were 16 when they had me, so I experienced life through the prism of teenage parents growing up in the ’80s. Because of this, I spent an inordinate amount of time in malls when they were the predominant cultural space.

I also grew up in the suburbs of Phoenix and saw the city go from something of a quaint desert town to the fifth largest city in the US. It was an incredibly rapid and homogenous growth. I saw a lot change in a brief period of time, and when you don’t know any better, new generally seems better — as if because something is done today it’s somehow automatically “progress.” 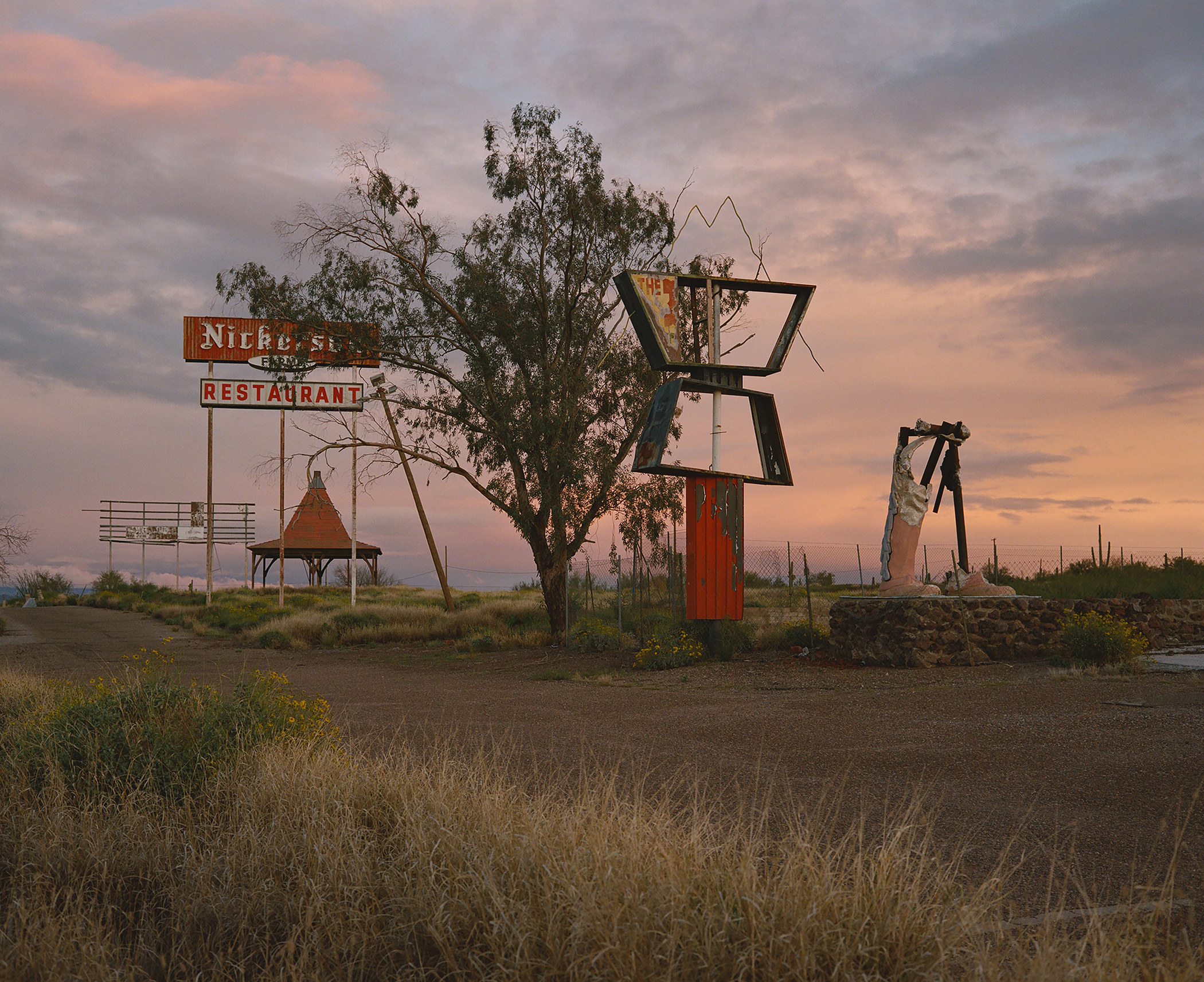 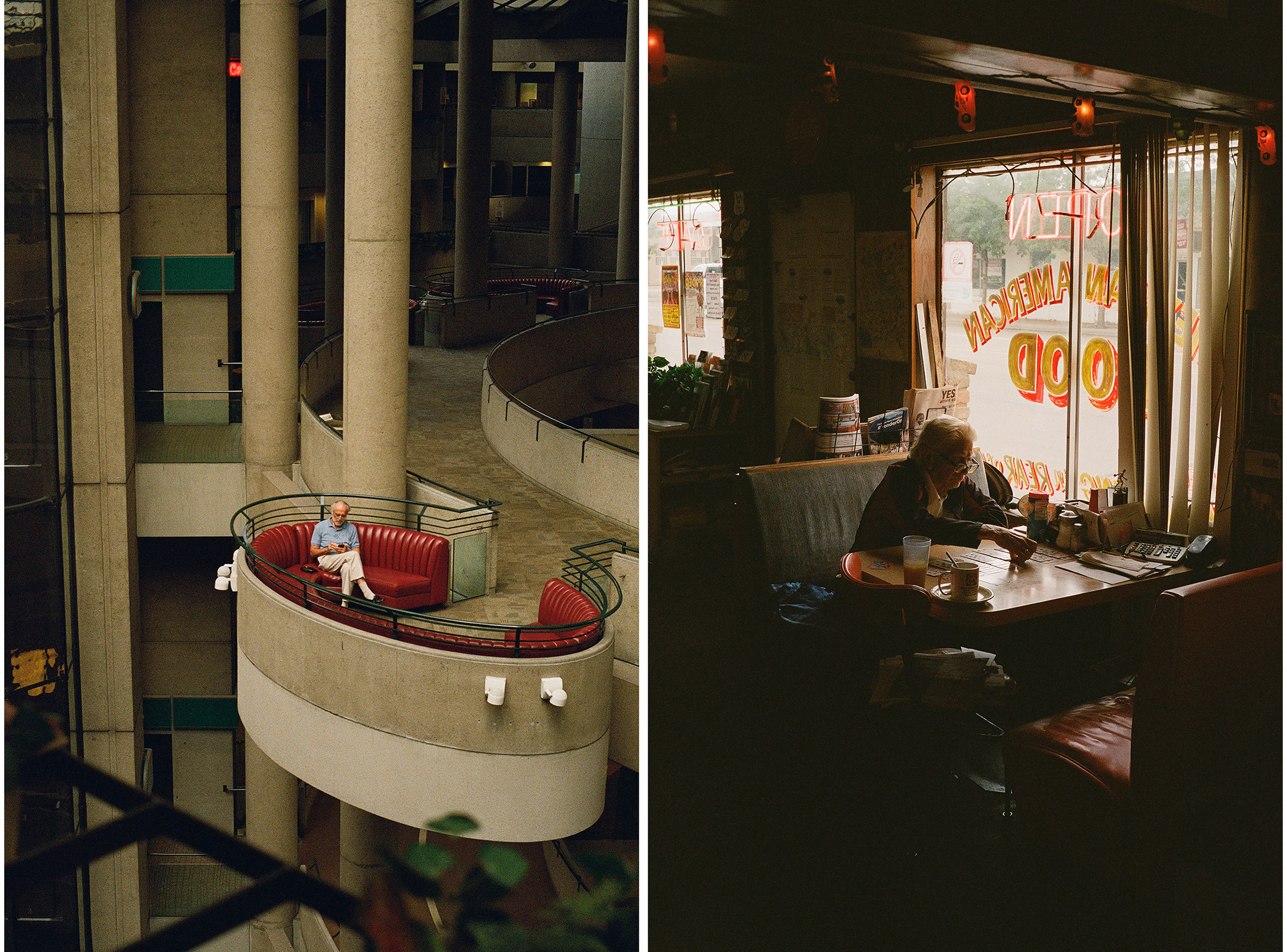 I think I attach a lot of meaning to places based on the richness of the experiences I had within them, imagined or otherwise, and used this work as a way to reconnect with those feelings and, ultimately, confront some realities about myself.

Do you consider yourself a nostalgic person?

At times, almost painfully so, but this work has tempered my nostalgia by providing a space to reckon with it. I think a lot of what I’m nostalgic for is shared, but nostalgia also allows one to forget that not everything from the past is gone. There’s a lot of what we once were just sitting around in a state of neglect — maybe the feelings we have for yesterday could be put to better use?

Is there a specific image that means the most to you?

For better or worse, malls have a certain outsized resonance because a large part of my childhood was formed within their walls. In the mid-2000s, I happened upon Carousel Mall in San Bernardino, which, even then it was a rare thing: a 1970s mall that was almost perfectly frozen in time.

I had first photographed Carousel Mall on film around 2008 and again on digital in 2010 — but I couldn’t get it quite right. I didn’t know how to make it interesting in a way that could be communicated outside my narrow obsession. Finally in 2012, I got a single frame from 36 exposures that finally captured some semblance of what I was aiming for, and I used that image as a guiding light from then on. 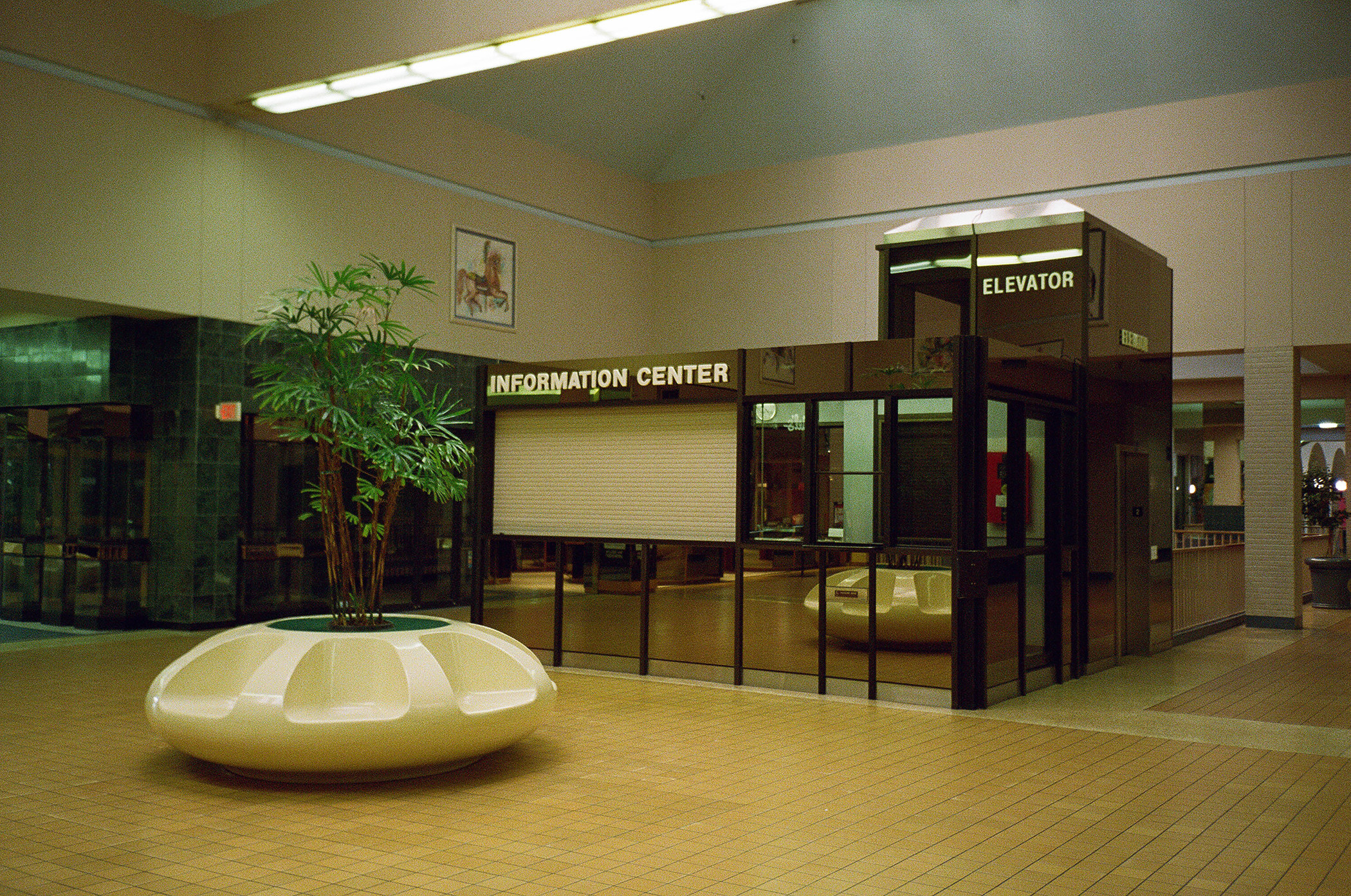 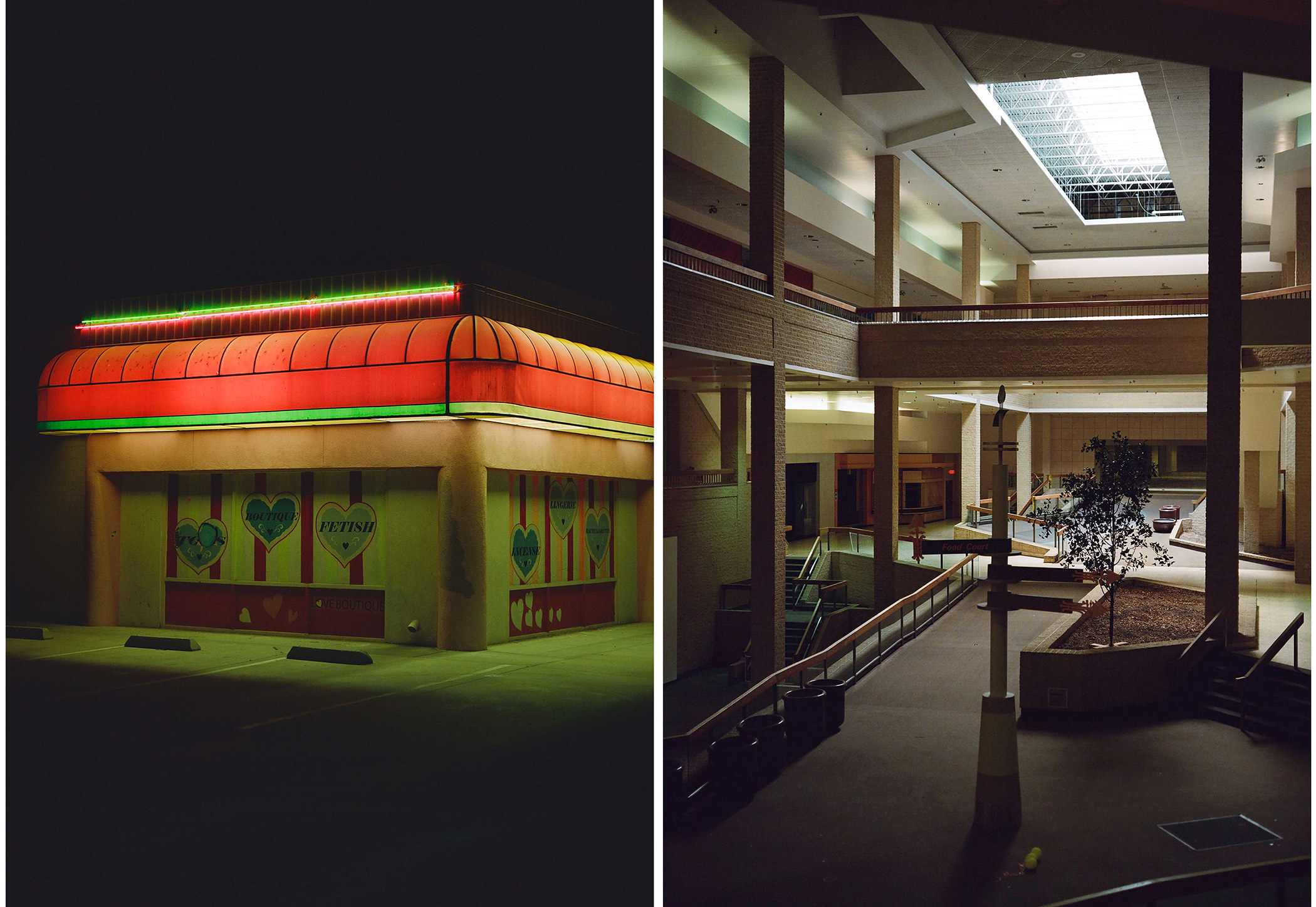 On May 11, 2018, the city briefly reopened the mall to auction off its contents. I spent some final moments there, sort of relieved that it was over, that some chapter had closed. This image was the moment everything crystallized for me and I have the mismanagement of the city of San Bernardino to thank for it.

Are you worried that these spaces will eventually disappear entirely?

I feel like I have maybe another couple of years left before the subjects I am looking for are either gone or are hopefully discovered and appreciated in a way in which my work is no longer as necessary — which is a bit idealistic, but that’s okay. 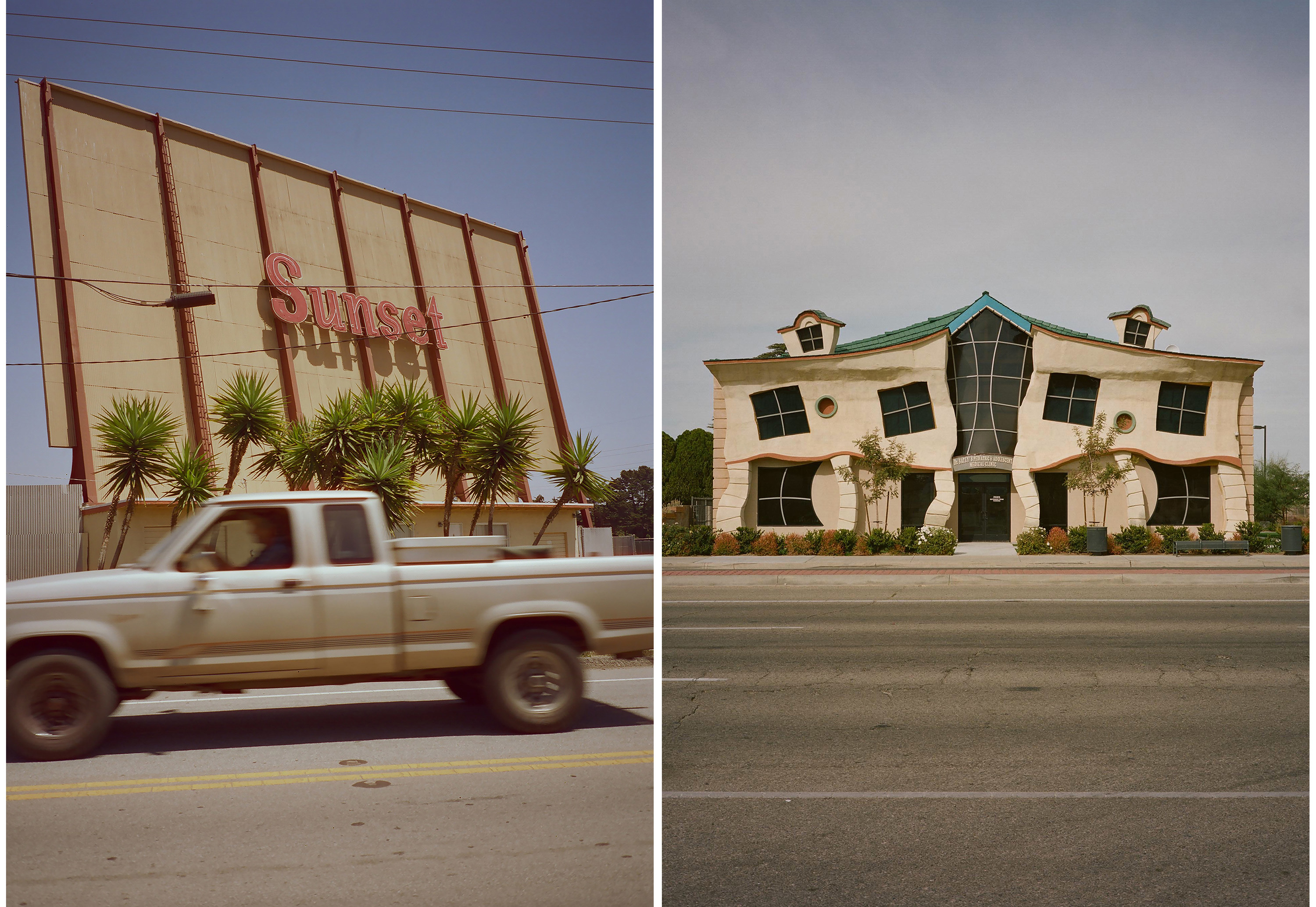 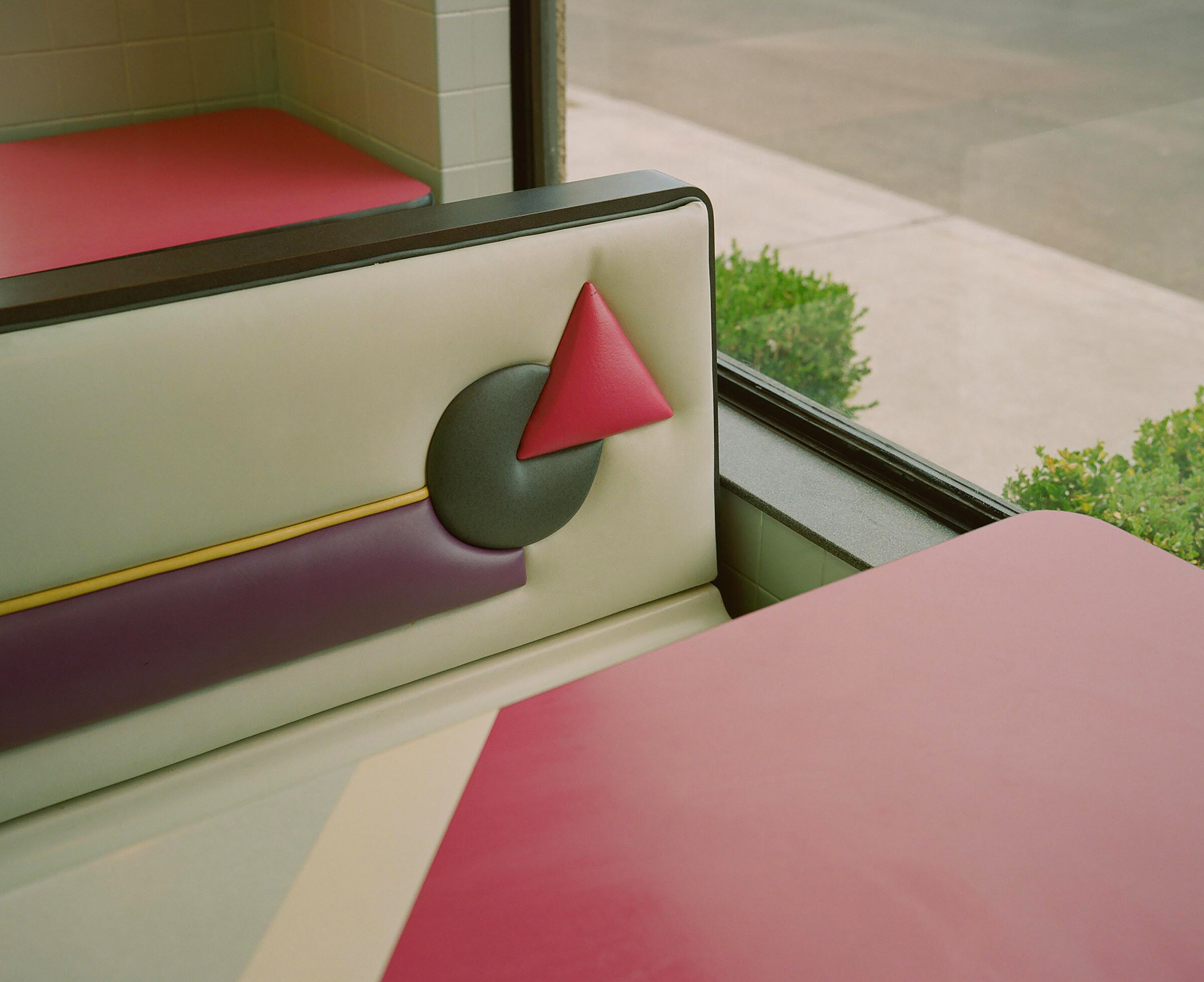 Did your perspective on these spaces change as your work progressed?

There was never any forethought in what I was doing when I started. I was simply seeking out that which caught my eye, things that seemed to stand out in an otherwise homogeneous commercial landscape.

After a lot of time exploring spaces and mining entire cities for things that reflected a “feeling” I was looking for, I came to realize that a lot of what I attached feeling and gave importance to was essentially fairly mediocre —that I was attaching a lot of feelings to commerce and how perverse that ultimately is. 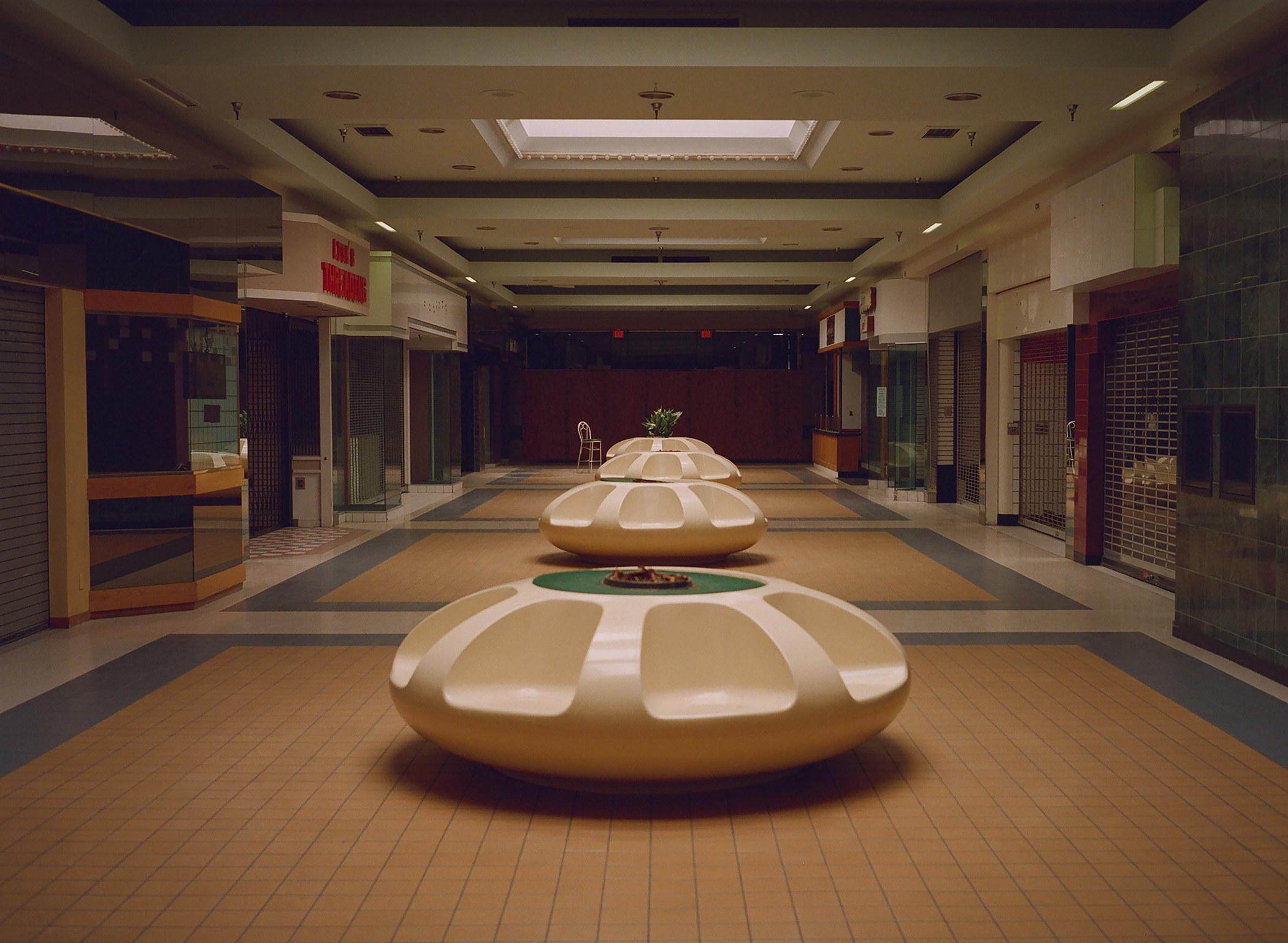 What do you want people to take away from your work?

I hope that people get whatever they want out of the imagery. I don’t want my feelings to guide the individual experience, especially because my present-day view will likely be recontextualized by time.

If there is any sort of takeaway, it’s that the pictures exist because the subject still exists, for now, and if something gives you a feeling of nostalgia, it is, in some cases, still possible to reconnect with those feelings and see if they actually hold any meaning or if you can just move on. I’m sure there’s a metaphor there somewhere. 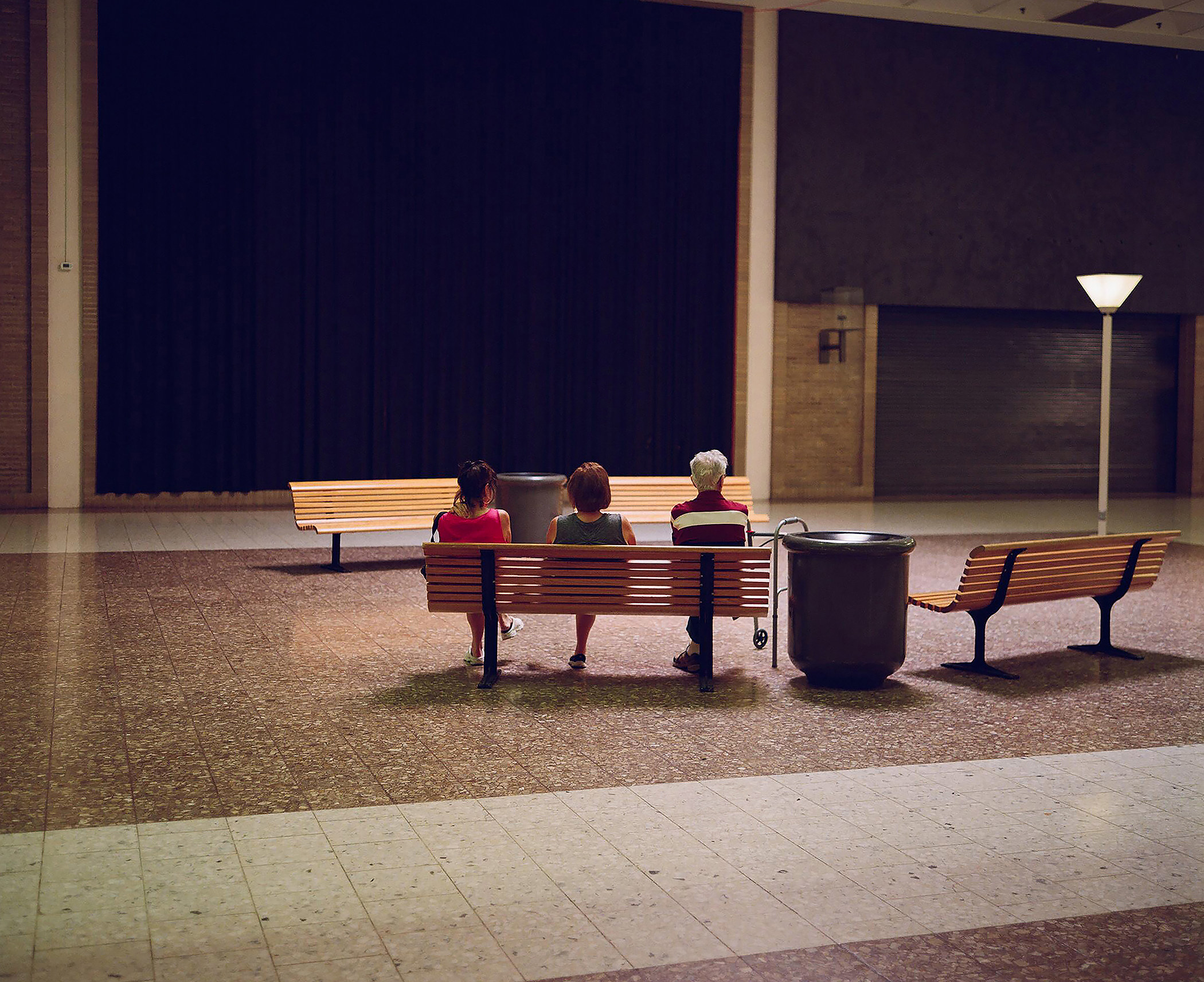 To see more of Phil Donohue’s work, visit his Tumblr or Instagram.

Pick up your copy of I Dreamed It Was Better Than It Was at citizeneditions.com.