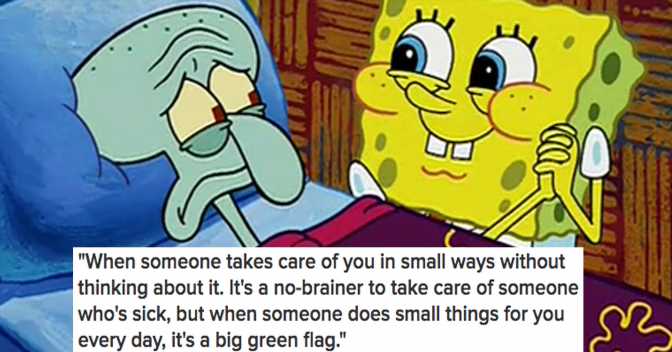 We’ve all been conditioned to look for “red flags” in other people when forming relationships…but what about the opposite? What about the good, “green flags” we should be keeping an eye out for?

Well this weekend, when Reddit user cometaurora asked, “What are some huge GREEN flags that are often overlooked?” the answers were wonderfully pure and surprisingly educational.

So, here are just a few “green flags” you should be looking for in your friendships and relationships:

1.“When someone is quick to give credit and slow to place blame. It’s a great sign that they will celebrate other people, but will also be really kind and benevolent when something bad happens.”

2.“Look for someone who pushes their chair in at a public establishment when you both leave.”

3.“My boyfriend will sometimes get upset and start a sentence with ‘Well, you…’ Then he takes a second and starts his sentence over with ‘I feel —’ I notice every time he does it and I am trying to do the same.”

4.“Good communication. Quality communication between two people can be way more important in a relationship than compatibility and is huge part of good chemistry. If you can communicate really well with someone, that is HUGE. “

5.“When someone admits to their mistake and/or owns up to it, rather than make an excuse for failing. It shows they’re trying to better themselves through that experience, and are being positive about it.”

6.“When someone doesn’t make you feel guilty for occasionally wanting to do things by yourself.”

7.“Someone who admits when they don’t understand something and asks questions about it until they do.”

8.“Always look for sweet, genuine honesty. When my husband and I started dating, I told him in passing I wanted to see a specific movie, so — for one of our first dates — he invited me over to watch that movie. I was a little nervous because I figured he’d meant ‘watch a movie…’ But, when I got there, he was cooking me dinner, and the movie was all set up on his TV. That was the day I decided to keep seeing him.”

9.“Whenever someone compliments others behind their backs, that’s a big green flag.”

10.“When someone treats people they don’t necessarily HAVE to treat respectfully with respect.”

11.“Not being so quick to hold grudges. One mistake and/or one bad day does not define a person.”

12.“Asking you how you’re doing/feeling. It was weird for me to go from a moderately abusive man (and not even being bothered by it because it seemed normal) to an amazing man (my husband). He asks me how I am and genuinely wants to know. It’s done my mental health wonders to know that he actually cares about me, even though it’s the smallest thing he could possibly do.”

13.“When you’re not afraid to disagree with them, because you know they’ll actually listen rather than just try to hurt you.”

14.“When someone puts their shopping cart in the collector instead of letting them roam free across the parking lot.”

15.“When people use that ~weird flashy light~ on your car BEFORE you merge into another lane or make a turn.”

16.“Someone who cleans up after themselves in public spaces when no one is looking.”

17.“I never realized what I was missing until I met my current girlfriend: It’s being able to talk about bad stuff. I had a breakdown and apologized for it, and the first thing she told me was to never apologize for ‘feeling bad.’ Being able to feel bad and not being afraid someone will be any less in love with you because of it is amazing.”

18.“It’s so small but — when someone asks you if you’ve eaten today. I know it’s super simple, but it shows they genuinely care about you and want you to know you’re happy and have a full belly!”

19.“When someone is friendly whenever they see their exes. Even better than that? Being friendly with an ex they share parenting responsibilities with. I’ve seen way too many people talk badly about the other parent in front of their kid(s).”

20.“Someone who’s meticulously careful with a borrowed possession and returns it in pristine condition. It proves that they care about how you’d feel if something was returned damaged.”

21.“When someone respects boundaries without being TOLD they have to respect them. I.e.: The difference between the friendly guy having a normal conversation with you and the guy who is outright aggressively hitting on you.”

22.“When someone interrupts you, but then says, ‘I’m sorry, what were you about to say?’ after the snag that interrupted you is finished.”

23.“Someone who grabs their wallet or purse when the check comes. Whether they end up paying or not, the intent it nice.”

24.“When someone takes care of you in small ways without thinking about it. It’s a no-brainer to take care of someone who’s sick, but when someone does small things for you every day, it’s a big green flag.”

So, now it’s your turn! What’re some “green flags” you try to look for in friendships, relationships, etc.? Help others and share yours in the comments below!

Some entries have been edited for length and/or clarity. H/T Reddit.