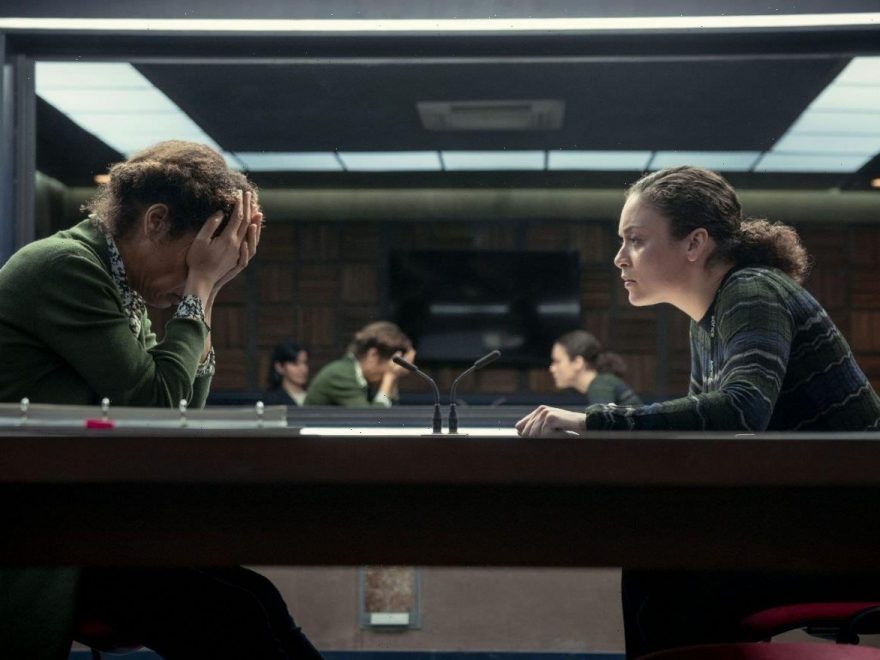 From Undercover to Netflix’s Criminal, here’s our pick of the absolute best detective dramas (and where to watch them).

You’d think, considering everything that’s going on in the world around us right now (here’s looking at you, Covid-19), we’d all be seeking solace in lighter, fluffier TV shows.

As it turns out, though, our obsession with dark and gritty crime dramas is at an all-time high, with the likes of The Serpent, The Investigation, The Bay, The Pembrokeshire Murders, and Line Of Duty season six (obviously!) receiving rave reviews this year.

Well, according to Sarah Hilary, aka the author of the award-winning DI Marnie Rome series of novels, we need these dark stories to help us process everything that’s happened.

As she tells the Radio Times: “I think the darker the real world becomes the more we need to confront and process the darkness on screen. Crime fiction tells the truth more honestly and resoundingly than any other form of fiction.”

Of course, a gritty crime series is always improved when you have someone to really root for – particularly when this someone is the sort of detective who’s willing to go to the ends of the earth to crack their case.

And so, with that in mind, we’ve rounded up the very best detective drama shows of all time.

In Undercover, Maya (Sophie Okonedo) is a high-ranking lawyer poised to become the first Black director of public prosecutions. But just as Maya’s life comes under intense public scrutiny, she is forced to turn detective when she discovers that Nick (Adrian Lester), her husband and the father of her children, has been lying to her for years. And his web of lies threatens to destroy not only her career, but also the life she and Nick built together.

Undercover is available to stream on BritBox.

Detective Jane Tennison (Emmy-winner Helen Mirren) is the sort of flawed but sympathetic hero that paved the way for all those brilliant female detectives who came after her.

In the first of a whopping seven seasons, she’s battling the contempt of her male colleagues in 90s Manchester when she’s suddenly thrust into a murder case. Will Tennison solve it before the killer strikes again?

Prime Suspect is available to stream on BritBox.

The third season of Marcella is currently airing on ITV,

Seasons one and two of Marcella are available to stream on Netflix.

The third season, meanwhile, is now on ITV Hub.

It may be called Happy Valley, but this series is anything but. Starring Sarah Lancashire as Catherine Cawood, it sees the strong-willed detective struggle to cope following her daughter Becky’s suicide. But, as she slowly becomes obsessed with the man responsible for Becky’s rape, Catherine finds herself unwittingly drawn into a dark kidnapping plot.

Happy Valley is available to rent on Amazon Prime Video.

One of the BBC’s most gripping and original detective dramas, Luther follows detective DCI John Luther (Idris Elba) as he takes down some of the most twisted and violent criminals in London. And he does so while struggling with anger issues that threaten to wreck both his career and personal life, too.

Luther is available to stream on BBC iPlayer.

Bosch is Amazon Prime Video’s longest-running series, all about homicide detective Harry Bosch (Titus Welliver) and the many, many crimes he solves. It’s hard to avoid spoilers, so we’ll keep this simple: each season focuses on a different murder, each episode is guaranteed to have you peeping out from behind your fingers as dark and twisted events continue to unfold.

Bosch is available to stream on Amazon Prime Video.

In this completely innovative take on the police procedural, each episode of Criminal: UK is a stand-alone psychological drama, consisting of the interrogation of an individual by an expert team of police investigators. And it makes for incredibly tense viewing.

Criminal: UK is available to stream on Netflix.

Inspired by the 1996 film of the same name, which was written and directed by the Coen brothers, the first season of the Emmy-winning Fargo focuses on deputies Molly Solverson (Allison Tolman) and Gus Grimly (Colin Hanks) as they investigate a triple homicide in Bemidji, Minnesota in 2006.

Fargo is available to stream on Netflix.

Lucifer gets his kicks helping the LAPD.

Clue’s in the title here, everyone; Lucifer (Tom Ellis) is a fun-loving demon, fresh outta hell and running a nightclub in Los Angeles. It’s not long, though, before he finds himself embroiled with local police and (here’s when the fun comes in) assisting them in solving fiendishly tricky criminal cases.

Lucifer is available to stream on Netflix.

Based on the novels by Caroline Graham, Midsomer Murders is set in the fictional (and ridiculously picturesque) county of Midsomer, which apparently has one of the highest murder rates in the UK. It’s up to Detective Chief Inspector Tom Barnaby (John Nettles) to unravel all of these twisted cases, with more than a little light-hearted whimsy, before the credits roll on each episode.

Midsomer Murders is available to stream on ITV Hub.

Starring Priyanka Chopra, this three-season series sees a group of young FBI recruits travel to the Quantico base in Virginia to receive training to become special agents. Unfortunately, though, some of them possess secrets unknown to others. Deadly secrets.

Quantico is available to rent on Amazon Prime Video.

Based on the true crime book Mindhunter: Inside the FBI’s Elite Serial Crime Unit by John E. Douglas and Mark Olshaker, this popular Netflix series follows a pair of FBI agents (Holt McCallany and Hamilton’s Jonathan Groff) as they interview serial killers in an attempt to a) understand how their minds work and b) put the information to work for them in new murder cases.

Mindhunter is available to stream on Netflix.

Murder In The First

Set in San Francisco, Murder In The First stars Taye Diggs as homicide inspector Terry English and Kathleen Robertson as his partner Hildy Mulligan. Together, they meticulously set to work solving a number of dark murder cases, and bring justice to the victims’ families.

Murder In The First is available to rent on Amazon Prime Video.

David Tennant and Olivia Colman star as two strongly-opposed detectives in Broadchurch. Despite their differences, though, they are thrown together when the corpse of an 11-year-old British boy, Danny Latimer, is found bloodied and dirty on an idyllic Dorset beach.

Broadchurch is available to stream on BritBox.

Sandra Oh and Jodie Comer star opposite one another in Killing Eve.

Based on the Villanelle novels by Luke Jennings, Killing Eve sees Sandra Oh take up the lead role of Eve Polastri, a jaded MI5 security officer whose desk job falls drastically short of her dreams of being a spy. Polastri is on the hunt for talented killer, Oksana “Villanelle” Astankova (Jodie Comer), who clings to the luxuries her violent job affords her. A mutual obsession slowly develops between the two women as a game of cat and mouse ensues.

Killing Eve is available to stream on BBC iPlayer.

Jessica Jones (starring Krysten Ritter as the show’s eponymous private detective) weaves a tale about an abuse survivor’s struggles with PTSD after a tragedy puts an end to her short-lived career as a superhero.

Jessica Jones is available to stream on Netflix.

In the city of Baltimore, Detective James McNulty (Dominic West) and his team investigate crimes and try their best to solve the bridge that exists between the drug kingpins and the law enforcement agencies.

The Sinner is available to stream on Netflix.

An absolute gem from Jed Mercurio, this BBC drama deals with the murky schemings of AC-12 as DI Kate Fleming (Vicky McClure) and DS Steve Arnott (Martin Compston) dig up high-level police corruption, treachery and bloodshed at every turn.

Line Of Duty is available to stream on BBC iPlayer.

Katrin ‘Kata’ Gunnarsdottir (Nína Dögg Filippusdóttir) is an ambitious detective with her eye on becoming the head of the Reykjavik police detective department. But when an ex-drug dealer is found murdered in the old harbour area in a brutal attack, Kata finds that she does not have as much control of her professional life as she had planned.

The Valhalla Murders is available to stream on BBC iPlayer.

Cynthia Erivo, Ben Mendelsohn, and Jason Bateman star in this adaptation of Stephen King’s The Outsider, which sees a seasoned detective pick up a murder case after the mutilated corpse of a young boy is found covered in saliva and human bite marks. When an insidious supernatural force edges its way into the case, though, it forces him to question everything he believes in.

The Outsider is available to rent on Amazon Prime now.

Is he mad, in a coma… or back in time? John Simm plays Sam Tyler, a troubled police detective who wakes up in 1973 after being hit by a car, where he’s forced to join forces with the foul-mouthed DCI Gene Hunt (Philip Glenister) so that he can a) stop a murder from happening in his own timeline, and b) figure out what the hell has happened to him.

Life On Mars is available to stream on Netflix and BBC iPlayer.

The FBI finds a strange woman in a bag in Times Square. With absolutely no memory of her past and mysterious tattoos all over her body, our Jane Doe (Jaimie Alexander) embarks on a journey to determine her identity.

Blindspot is available to stream on NOW TV.

Benedict Cumberbatch and Martin Freeman star as Sherlock Holmes and former army doctor Dr John Watson who, after finding themselves sharing a flat in modern-day London, decided to work together on a series of most unusual cases.

Sherlock is available to stream on BBC iPlayer.

Unforgotten is available to stream via BritBox.

In this critically-acclaimed antholody series, police officers are forced to face dark secrets about themselves and the people around them while investigating homicides. And, driven by Mahershala Ali’s mesmerising performance, the show’s third season sees his character, Detective Wayne Hays, investigate a macabre crime involving two missing children.

True Detective is available to rent on Amazon Prime Video.

Kenneth Branagh stars as our eponymous detective in Wallander, which sees him investigate a series of murders in the south of the country, near Skane (and uncover a corruption plot at the heart of the Swedish establishment in the process, too).

Wallander is available to stream on BBC iPlayer.

After a trivial brush with the law, Raza Shar (Nabhaan Rizwan), a second-generation Pakistani young man from East London, is relentlessly coerced by a counter-terrorism officer with a questionable past into working for him as an undercover informant. It’s a job that will compromise not only his own beliefs, but the safety of those he loves most, too.

Informer is available to stream on BBC iPlayer.

Perhaps the definitive Scandi noir, The Bridge begins during a blackout, as the body of a woman is found in the middle of the Øresund Bridge between Sweden and Denmark. It soon becomes apparent, though, that there is more to the gruesome discovery than meets the eye. Because this is not actually one corpse but two halves of two separate women: a Swedish politician, and a Danish prostitute.

Trapped in the middle of the bridge, a bi-national investigatory team is put together to solve the crime.

The Bridge is available to stream on BBC iPlayer.

Top Of The Lake

As Robin Griffin, Elisabeth Moss is Top Of The Lake’s gutsy but inexperienced detective. Called back to her home town to investigate a young girl who is discovered pregnant and then goes missing, she sets to work on solving the case. However, it soon becomes clear that the troubled character is steeling herself against her own traumas.

Top Of The Lake is available to rent on Amazon Prime Video.