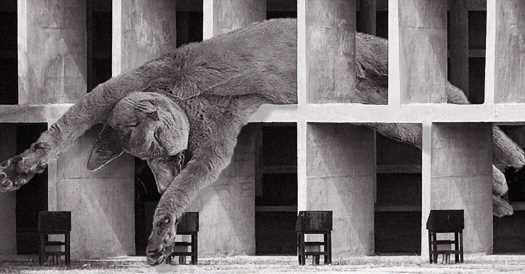 Before the pandemic, I wasn’t exactly an art world jet-setter, but I did travel somewhat regularly. This year, being homebound for the better part of nine months has left me feeling loopy and itching for escape. I want to get away, not just from my apartment but from my own brain. Looking at art helps with that, as does scrolling through social media — and these Instagram accounts, in particular, transport me. Existential, fantastical, searching and silly, they reconnect me to the world by shifting my perspective on it.

The impetus of Random Man Editions is to promote “the overlooked, underrepresented, the hybridized and the fringe,” according to its website. This art publisher releases all kinds of editions but leans heavily into analogue items, like hand-stitched zines and video compilations on VHS tapes. It’s amusing, then, that I learned about Random Man on Instagram, but the platform is a good place to see the obscure gems it’s dug up from the past and the unusual projects it’s promoting in the present. Recent highlights include a video CD of the 1999 Bollywood horror movie “Bhoot Ka Darr” and “Patient ‘O,’” a collection of coronavirus-themed erotica edited by the writers Hyunjee Nicole Kim and Dana Kopel. Such breadth is one of the delights of following Random Man, along with its offerings of radical creativity.

Eden Seifu’s debut solo show took place at Deli Gallery in Brooklyn earlier this fall, and it was enthralling. Her Instagram account, filled with images of her otherworldly work, is equally so. The artist seems inspired by a host of sources — Surrealism and Romanticism, fantasy illustration and anime — but the results are wholly hers, a blend of styles that culminates in psychedelic color and an enigmatic, sometimes ecstatic, passion and spirituality. Ms. Seifu animates her scenes with both action and symbolism; looking at her work often feels like entering a story midstream, when you don’t know the setting, but it’s clear that the stakes are high. One of my recent favorites, “Two Fools Evade Buffoonery by Praying and Making as the Asteroid Approaches,” could be a haunting metaphor for continuing to make art during a pandemic.

The Instagram account of the artist Jaakko Pallasvuo has a nonsensical name — Avocado Ibuprofen — but its contents blend that sense of absurdity with introspection. Perhaps the defining attribute of this feed is its meta-ness: Pallasvuo (who uses the pronouns they and their) grapples in funny and brooding, often caustic, yet always genuine, ways with the realities and doubts of being an artist and a human (as well as someone who makes work for social media). While those concerns have stayed constant, their style has changed radically over the past few months. Messy, hand-drawn panels have given way to typed text that coexists more abstractly alongside found and digital imagery. The new comics feel almost collagelike, which suits the associative, existential nature of Pallasvuo’s musings.

Visually, Christine Shan Shan Hou’s work is quieter than everything else on this list. That’s a big part of why I like it: With minimal means, she conjures a searching, often playful tone. Ms. Hou is a poet, and her collages, which she posts on Instagram under the title Hypothetical Arrangements, reflect that. Some are punlike, clever plays on words and visual tropes; others feature cutout images of objects arranged against the white background of a blank page, leaving viewers to create a context and imagine connections on their own. With suggestive titles like “how i used to think” and “old hurts,” the project sometimes feels diaristic, as if Ms. Hou were using mass-media imagery to channel a transmission from her brain.

Cats of Brutalism is unabashedly silly; it also feels like it could have been tailor-made for me, an art critic with two cats. The account, which is the project of three architecture students, with two of their professors at the University at Buffalo, taps perfectly into the magic of the internet, where the unlikeliest things get mashed together. Here, images of cats are photoshopped onto, into and around photographs of Brutalist architecture from around the world. Entertaining enough, but what puts it over the top is the scale: The buildings are shown in exterior shots while the cats get supersized, turning them into absurd feline King Kongs. At the same time, their presence makes the structures, which have often been dismissed as ugly monoliths, appear lighter and more playful — like the expressions of imagination they were intended to be.