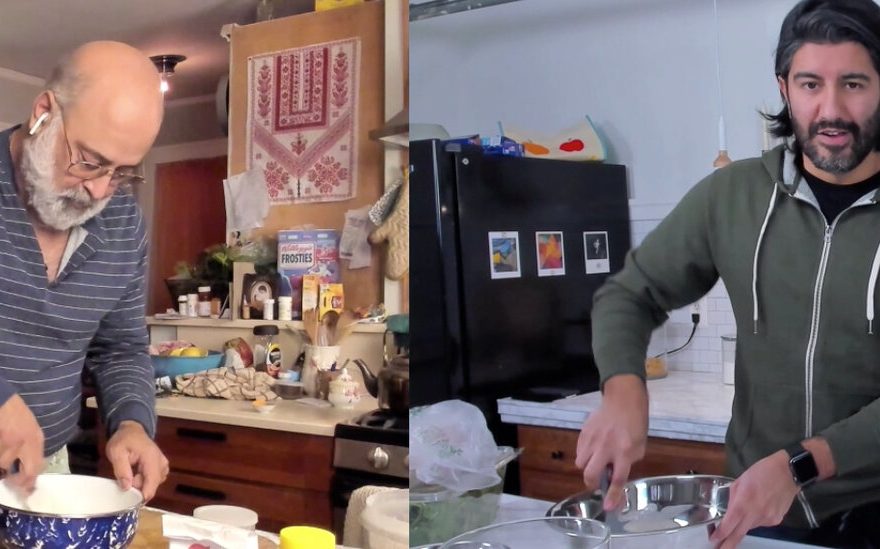 There is nothing like a recipe from someone you love to stoke the memories. You pluck it from the leaves of the cookbook — or, if you’re neater than I am, maybe from a recipe file — and instantly they’re there with you in the kitchen, at least in your mind.

If that person is someone you’ve lost, cooking or baking can become a sensory act of remembrance: whipping up a dish they once made to nourish you.

At each step in the process, your fingers and palms, shoulders and arms repeat motions that theirs used to make. Familiar scents waft from your spice jars and cutting board, then from your stove. And when the cooking is done, that longed-for taste is on your tongue.

At least if you’re doing it right. In Amir Nizar Zuabi’s new livestreamed play “This Is Who I Am,” success has so far eluded both the husband and grown son of a woman who once upon a time, before illness took her, would feed them fteer, savory stuffed pockets of bread that she’d baked herself. 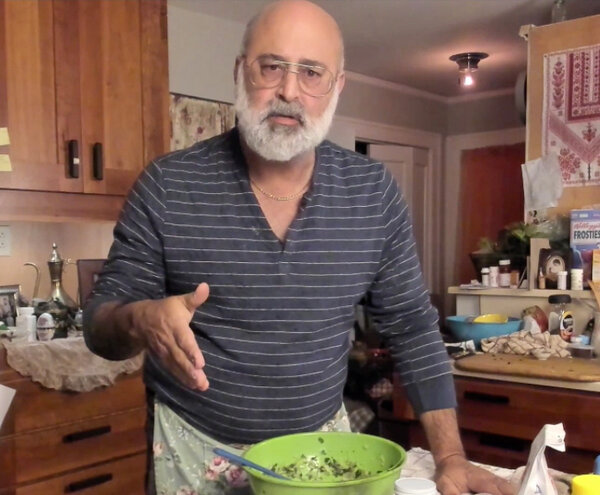 So here they are on a video call — the father (Ramsey Faragallah) at home in Ramallah, in the West Bank, the son (Yousof Sultani) at home in New York — resolved to re-create the dish properly.

“You need me, and I need you,” the father says, “to retrace this recipe, so we make it like she used to.”

At a time when gathering online is often the only way to lay eyes on family members, this is a promising premise for a two-hander — so promising that no fewer than five well-respected theaters across the country have teamed up to present Evren Odcikin’s production: PlayCo in New York, Woolly Mammoth Theater Company in Washington, American Repertory Theater in Massachusetts, the Guthrie Theater in Minneapolis and the Oregon Shakespeare Festival.

That level of enthusiasm, unfortunately, raises expectations higher than this unsubtly staged play can meet. Performed live, with each actor in his own kitchen, it opened bumpily on Sunday when, a few minutes into the show, a “We are experiencing technical difficulties” message abruptly appeared on the screen.

The cause, a publicist told me later, was a connection problem that made the actors appear to be out of sync — which probably explains why one seemed to step on the other’s line, and maybe explains what seemed to be a perplexingly headlong pace. After the show started over from the top, the performances were better, and not as rushed. Yet the emotional tenor was still off.

“This Is Who I Am” is about love and grief and fathers and sons, and about how misperceptions get baked into our memories, hardening into bitter resentments. It’s about notions of masculinity and cycles of violence in a blood-soaked land, and about how leaving to find peace somewhere else can seem to be an act of abandonment even when it’s meant as self-preservation. It’s also about unseen sacrifices, and the whispered promises we make to the people we cherish most.

Zuabi, whose site-specific “Oh My Sweet Land” was performed in kitchens around New York when PlayCo produced it in 2017, has folded many layers into this play, along with the practical challenge of taking as long to tell its story as it takes to bake the fteer.

But this production, which runs a little over an hour (and whose audiences get a copy of the recipe by email afterward), is too blunt to coax the nuances of humor and care from the dialogue, too full of hair-trigger anger to let either Faragallah or Sultani find the quiet in the heightened language of reverie. It does, however, indulge the text’s moments of sentimental cliché.

Like the recipe, the script is open to artistic interpretation. One vital step might be to lower the temperature.

This Is Who I Am
Through Jan. 3; woollymammoth.net.