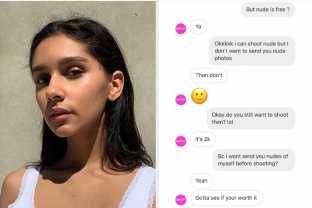 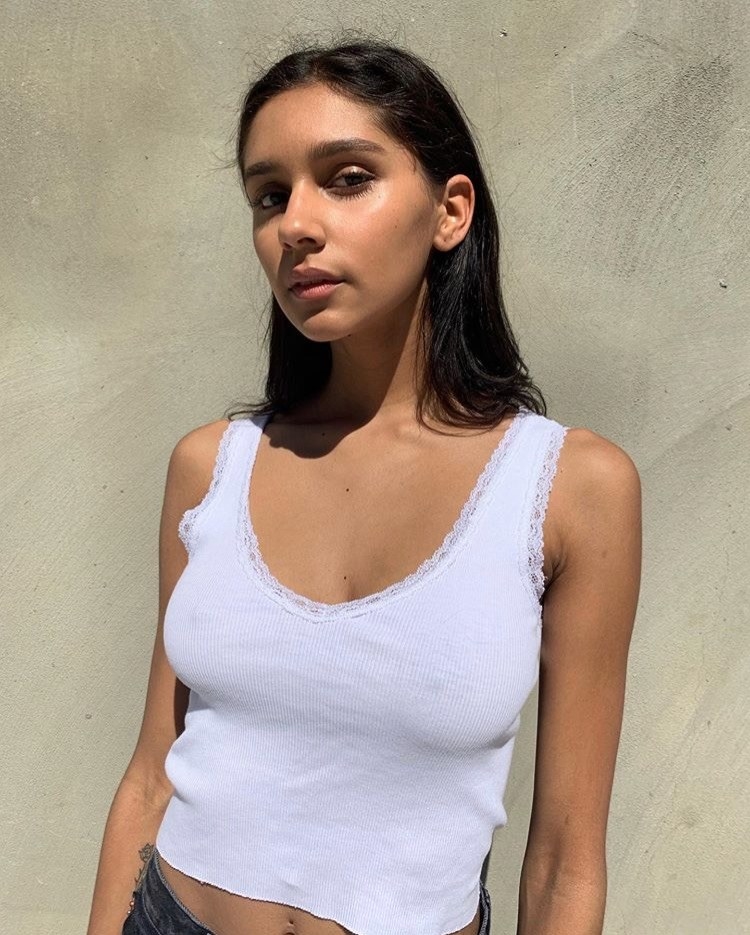 Sunnaya Nash had been a fan of Marcus Hyde’s photography for years. So when she swiped past his Instagram story Sunday, saying he was looking for subjects — “who wants to shoot,” he wrote over an image of a naked woman in a shower — she quickly messaged him.

“He responded immediately asking me to send simple iPhone digitals, which I did,” Nash, Los Angeles–based model and interior design student, told BuzzFeed News in an Instagram DM conversation.

But then, “Directly after that, he asked for nudes.”

Their eventual exchange — which the 20-year-old Nash screenshotted and posted — has now gone viral, sparking outrage and backlash against the influential celebrity photographer to megastars like Kim Kardashian West, Kanye West, Chance the Rapper, and Ariana Grande.

Nash told Hyde she didn’t have any nude photos. But said she was “comfortable shooting lingerie and partial nudity.”

“But nude is free?” the model asked. Hyde said it was. So she agreed to a nude photoshoot — but said she didn’t want to send him any naked shots of herself beforehand.

“Gotta see if your worth it,” he wrote. When she pushed back, he said, “Find someone else. I’ll keep shooting celebs.”

When Nash called him out in her story, he allegedly told her to “suck a fat big dick.”

Shocked, but “not surprised,” the model shared their conversation to her Instagram story. She knew her friends would reply, but what she did not expect was an outpouring of stories from other women who said that Hyde coerced them to send him nudes and took advantage of them.

Hyde has since made his Instagram profile private, and has not addressed the allegations or responded to multiple requests for comment.

“I had no idea it would receive this much attention,” she said. “I’m thankful that it did because so many girls dm’d me sharing their stories.”

On Monday night, Grande addressed the situation while not directly calling out Hyde.

“i have just read some shocking and really heartbreaking stories. i hate that this is a conversation. but. please do not shoot with photographers who make you uncomfortable or make you feel like you need to take your clothing off if you don’t want to. if you want to, sick. but if you don’t, please don’t,” the “Thank U, Next” the singer wrote.

“if they tell you you have to pay more money if you’re clothed that’s fucked and i’m sorry that has happened to you. i promise there are so many respectful, nice, talented photographers out there.”

Nash, though, said that she found Grande’s call out “avoidant and kind of blaming.”

“I’m glad she spoke up, but I don’t think she was getting the point,” the model said. 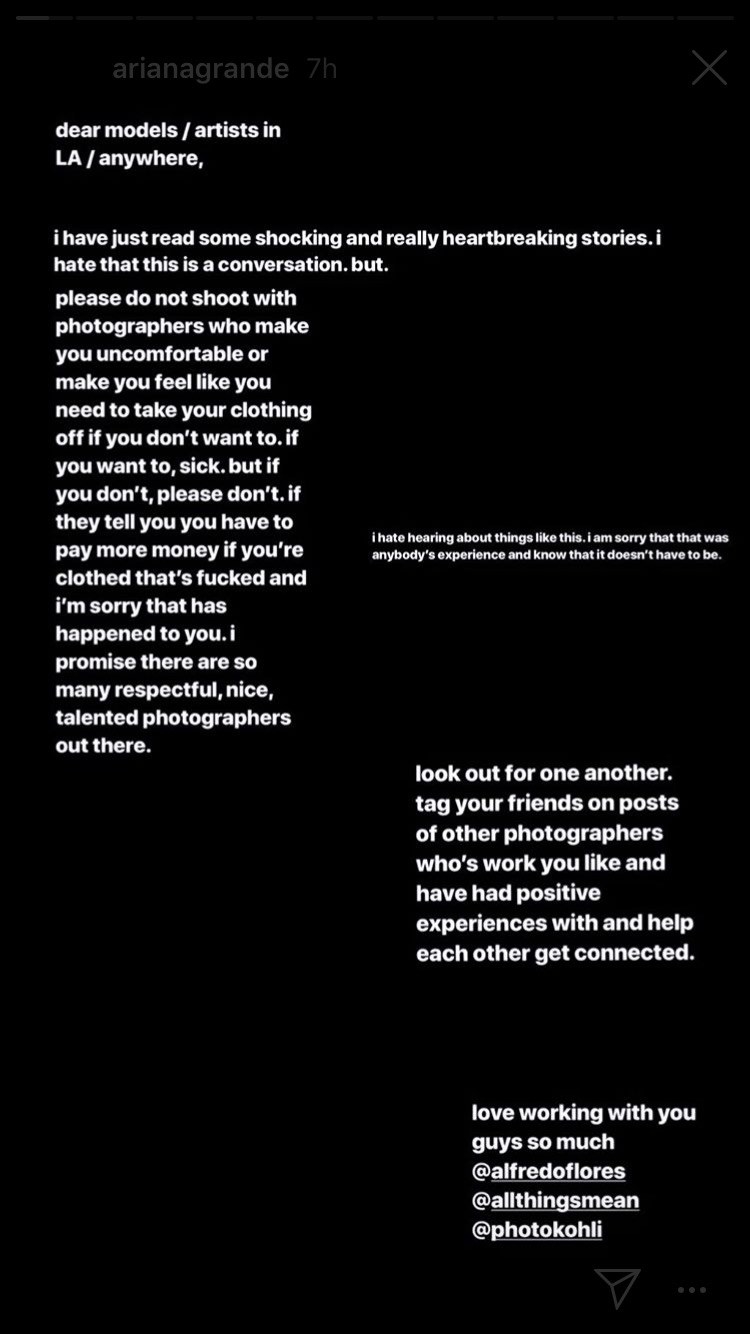 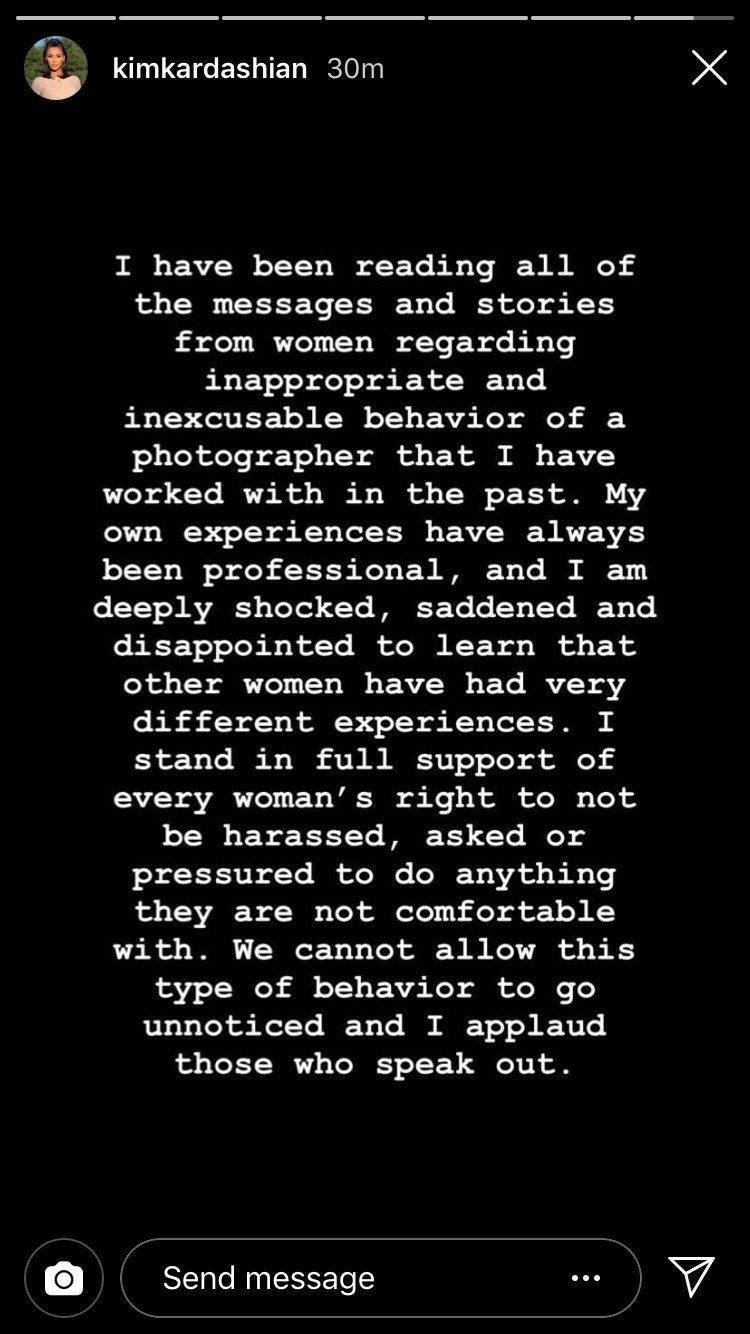 The next morning, Kim Kardashian West addressed the controversy, writing in her Instagram story that she, too, has been reading “all the messages and stories from women regarding inappropriate and inexcusable behavior of a photographer I have worked with in the past.”

Last October, Hyde nearly died after he drove off a cliff in Malibu. Kim and Kanye West both donated $25,000 to his recovery. Hyde made his first public appearance since the crash in April at West’s Coachella Easter performance, where he sat in a wheelchair sandwiched between Kim and Kourtney Kardashian.

“My own experiences have always been professional and I am deeply shocked, saddened and disappointed to learn that other women have had different experiences,” Kardashian West said Tuesday. “I stand in full support of every woman’s right to not be harassed, asked or pressured to do anything they are not comfortable with. We cannot allow this type of behavior to go unnoticed and I applaud those who speak out.”

Nash and Diet Prada have been posting many of these stories to their Instagram and Twitter profiles. Several of the women say that, even after sending him nudes, Hyde never gave them the photos he took of them during shoots.

“They just kept coming,” Nash said. “It’s been overwhelming trying to sort through the messages I am getting but I am glad I got to connect with many women who wanted me to share their stories while protecting their privacy.”

In response to Nash’s experience, Kate Rose, another LA model, posted emails from 2014 of Hyde also asking for her to send nude photographs before their shoot.

“He is a vile human being,” Cindy Bowie, a makeup artist who has worked with Hyde, told BuzzFeed News.

Bowie said that Hyde was well known in the Instagram, influencer, modeling community for his behavior, for how he uses “his clout as someone who has worked with Kim Kardashian and Arianna Grandes photographer as a way to manipulate them.”

“He’s not the only one who behaves like this either,” she said.

Nash echoed similar sentiments about her industry, saying that, as disgusted as she was by Hyde’s behavior, she “almost expected it.”

“Many male photographers with big names really have no respect for smaller models,” she said.

Although she says she’s overwhelmed by the reaction and rush of “me too’s,” her post has sparked, she is determined to keep the pressure and attention on the allegations.

“What was most shocking about [this whole experience] is how many other girls had even worse experiences with him,” the model said. “My heart goes out to them and I want to make sure he will not be able to do it again.”