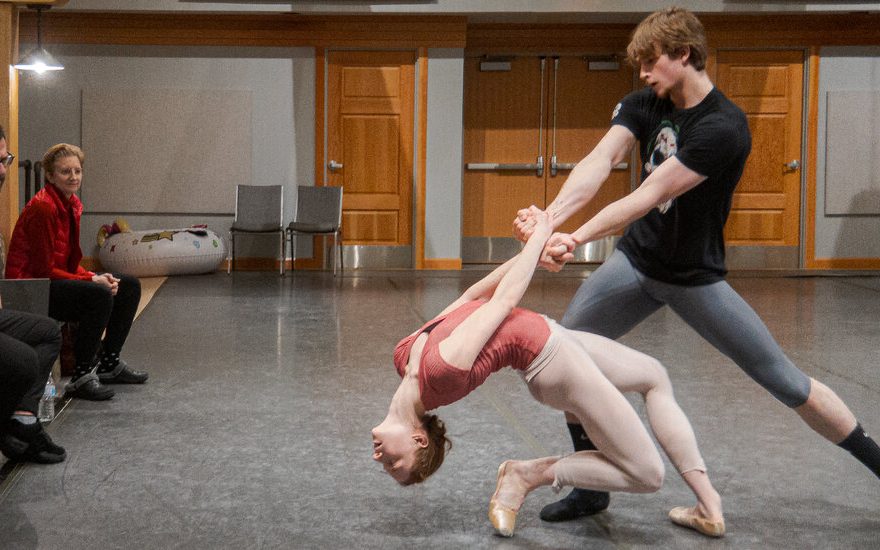 A few weeks ago, a group of dancers was hard at work in a converted conference room at the Silver Bay YMCA, a conference center and retreat, on the shore of Lake George. Men were lifting each other into the air, women were spinning, or hopping on pointe as they traveled through space. None were wearing masks, and all looked to be in surprisingly good shape.

At the front of the room, the choreographer Alexei Ratmansky moved around restlessly, peppering them with suggestions: “Slooooowly!” “Resist! Resist!” “Follow each other!” The dancers corrected course. You would never have guessed that neither Ratmansky nor the dancers had been inside a theater for nearly a year.

The seven dancers, all from American Ballet Theater, were creating “Bernstein in a Bubble,” a new ballet set to Leonard Bernstein’s “Divertimento.” It will be Ratmansky’s first since last March, when his full-length “Of Love and Rage” premiered at the Segerstrom Center for the Arts in Costa Mesa, Calif. (“Bernstein” will be available on the New York City Center website, starting on March 23 as part of an all-Ratmansky program, presented by American Ballet Theater and City Center.)

For Ratmansky, one of the busiest choreographers in ballet, the scene was a welcome change from last year, when he was remarkably un-busy. With a pandemic raging, you can’t travel around the world making dances, so he spent months doing what many of us have been doing: padding around his apartment in socks, attending video meetings, watching movies (in his case, lots of Japanese anime), listening to music, reading.

At first, he said, the forced pause came as a relief. He had been working nonstop for almost two decades, always feeling a step behind. But that initial phase lasted only about two months, just enough time to rest and do nothing. Then the inertia set in. “It’s like a dress rehearsal for retirement, and it turns out that I’m not ready for it,” he said in an interview in DanceTabs in August.

“At the beginning of the lockdown I had, you know, Napoleonic plans,” Ratmansky said recently, on Skype. “I’ll do this, I’ll do that; I’ll write something; I’ll make plans in my head. But in the end, not much happens.”

He got some reading done, including the “Iliad” and the “Odyssey,” which he hadn’t picked up since his school days. And, inspired by his obsession with Greek and Roman art, he began organizing photos he has taken during trips to Southern Europe and the Middle East, and posting choice specimens on Instagram, using the handle @Grecoromansky.

What he didn’t do was make new ballets. Though he said he recognized that Zoom and FaceTime could be useful tools, Ratmansky has been resistant to creating new choreography remotely. Nor did he try his hand at making a dance film, a genre that has become increasingly popular, out of necessity.

“For what I do, and for the language I use, the stage is needed,” he said. “Dance films are as much about the editing as they are about the dancing. My personal preference is to see the dance as it is.”

‘What he does for fun’

One thing he was able to do through Zoom — besides stay in touch with his parents in Kyiv, Ukraine, and son in Dresden, Germany — was collaborate with dancers on the deciphering of late-19th-century dance notations, a source of fascination to Ratmansky, who has used them to recover choreographic detail in several ballets by Marius Petipa. (A trove of these notes, written in hard-to-crack code, is at Harvard.)

Over the summer and fall, first with Viktorina Kapitonova, from Boston Ballet, and then with Skylar Brandt, from Ballet Theater, he has reconstructed dozens of dances from old ballets, many of them long forgotten. He describes the steps as notated and the dancer executes them, trying out different possibilities. 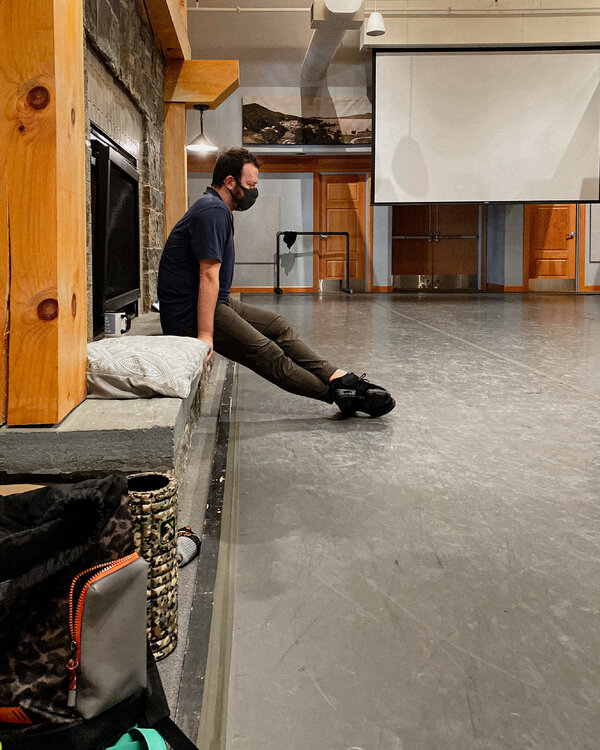 “We literally did a variation a day for about an hour via Zoom, and then at the end of the hour I would run it, and we would record it,” said Brandt, who is also dancing in the new work created at Silver Bay. “This is what he does for fun.”

Among the notations at Harvard are those for the original “Sugarplum Fairy Variation” from “The Nutcracker,” by the Russian choreographer Lev Ivanov. Ratmansky liked the solo so much that when Ballet Theater filmed his version of the “Nutcracker” pas de deux over the holidays for virtual release, he decided to include it. “I just couldn’t go back to my own version!” he said.

Back in the studio

The “Nutcracker” filming brought him into the same physical space with dancers for the first time since March. Rehearsals were masked, and he kept his distance. Despite the unusual circumstances, and the inconvenience of making himself understood through a mask, he said he felt as if no time had passed. “Being in a studio communicating with dancers, this is like food for any choreographer,” he said.

After that, he was ready to take part in a bubble. In these residencies, artists quarantine and take multiple Covid tests, and once together, stay isolated from the rest of the world. This system of protocols has made it possible for dancers and choreographers to work together, in person, during the pandemic.

“I feel that adrenaline I remember being part of the creative process,” Ratmansky said just before the residency began. “It’s like your wings are beginning to vibrate once again.”

When Ratmansky arrived, the seven dancers, including three of Ballet Theater’s newest principals, Brandt, Cassandra Trenary and Aran Bell, had already been at Silver Bay for two weeks, ramping up their daily training to be ready for long days of intense rehearsals. (Because Ratmansky arrived later, he had to wear a mask for his first two weeks.) Some of the dancers, like Patrick Frenette, had been confined to doing barre at home for the better part of a year.

Others, like Brandt, Bell and Catherine Hurlin, a rising soloist, had access to ballet studios and live coaching. “A few of them looked like they had never stopped dancing, and their confidence level was great,” said Nancy Raffa, one of the company’s rehearsal directors, who came along to teach class and assist. Her main task those first days was to get them all back to the same level. (Three additional dancers, Melvin Lawovi, Leah Baylin and Cameron McCune, were also at Silver Bay, creating a new piece for the company’s choreographic workshop, ABT Incubator.)

The Silver Bay YMCA is in an idyllic spot, on a lake, surrounded by forests, now covered in snow. “The view from the window is like wallpaper,” Ratmansky said “Nothing ever changes, not even a person walking outside.”

He didn’t mean this as a criticism. “When I’m working, the less interaction with the outside world, the better,” he said. “Here, from the studio to my room is just a few steps. I don’t have to put on any shoes or a coat. It’s like a dream come true.”

The new ballet, about 15 minutes long, is set to an eight-part suite composed by Bernstein in 1980 in honor of the Boston Symphony Orchestra’s 100th birthday. It’s a celebratory assemblage of Bernstein-ian gestures: blaring brass, big crescendos à la “West Side Story,” syncopation and jazzy intonations.

Ratmansky, who has made two previous ballets to Bernstein’s music, took his cues from the suite’s energetic drive and humor. “I’m trying to have the same intentions as Bernstein, to make a fun piece to show off the group,” he said. “I didn’t want to express the sorrows of our times through slow port de bras. I wanted to give them the chance to do some real dancing, with joy and playfulness.”

A rehearsal observed through Zoom revealed choreography bursting with high-powered moves, but also with jokes: dancers crawling around like crabs; carousel-like spinning formations; a dancer perching on the thighs of two other dancers and then shimmying through a diamond shape formed by their arms.

The dancers’ energetic vibe had influenced the direction of the piece, Ratmansky said: “It comes out of them. They come into the studio and I watch them. I am a bit like a mirror.”

By the end of the rehearsal — his ballets are famously taxing — they were clearly worn out. As Frenette put it, “it’s like Ratmansky Cross Fit.”

Days before the residency ended, on Feb. 13, there was a palpable feeling of sadness in the group. “I’ve already heard comments,” Raffa said a few days before their departure. “They don’t want it to end, because they love what they do.”

For Ratmansky too, the end meant going back to New York, back to working at his kitchen table, gathering notes and ideas for his next ballet, and the one after that. But unlike six months ago, there are now plans on his calendar, even if some of them may be in pencil. The period of hibernation has ended — the thaw has finally arrived.