The mountain had been scribbled on a piece of cardboard, and formed the backdrop for an online show she was performing as part of the annual Leicester Comedy Festival. But Ives said it was more than a prop: It was a metaphor for the daily struggles of transgender people in Britain, who have to continually deal with attacks, as if clambering up a hill.

If it sounded like a tough premise for a comedy show, Ives insisted it would be fine. “I’m more than qualified to take you up this hypothetical mountain.” After all, she said, “I am transgender myself.”

Transgender people have never had a higher profile in British culture, but with that visibility has come opposition to transgender rights, in mainstream news media and on social media. And in stand-up comedy, a medium that reacts to society’s preoccupations, trans issues have often been treated like a punchline.

Stepping onstage as a trans comedian in this context, Ives said in a recent phone interview, she sometimes felt like she had to represent an entire community, when she would prefer to just tell jokes. 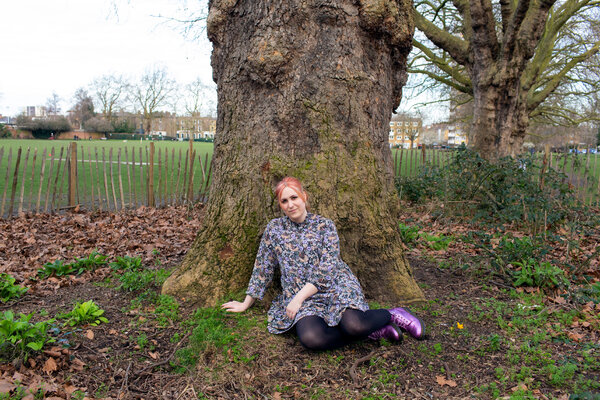 Unlike in the United States, where positions on transgender issues are split along partisan lines, in Britain, prominent voices on both the political left and right have said, for example, that allowing transgender women to use bathrooms that match their gender identity endangers other women. (A 2018 study from the University of California, Los Angeles found concerns about safety and privacy were unfounded.)

J.K. Rowling, the author of the “Harry Potter” books, is perhaps the most famous British figure to make such claims, and people, including many fans, have accused her of transphobia. In an essay last year, she wrote that she saw the movement for transgender rights as doing “demonstrable harm in seeking to erode ‘woman’ as a political and biological class and offering cover to predators like few before it.”

Dan Healey, an academic at the University of Oxford’s Centre for Gender, Identity, and Subjectivity, said in a telephone interview the debate around transgender rights in Britain was louder than in the United States. “What we have here is a debate between groups of feminists who either accept trans women are women, or who don’t,” he said.

Trans people say feminists who don’t accept them question their very humanity. “One of the worst things about the state of trans issues in the U.K. now is it does feel like there’s an active attempt to dehumanize trans people,” Ives said. “We’re so often not viewed as people. We’re viewed as a debate, or an agenda or a trend.”

Ives, 30, said she had talked about being transgender onstage since she first tried standup in 2017, and audiences seemed to “like the fact someone was talking about it,” she said.

“Peak Trans,” her show, was partly a response to the toxic climate in Britain, she said. “If you make someone laugh, you’re not going to necessarily change their mind, but you’re at least showing them that you are a person,” she added.

In the show, even when Ives talked about the anger against transgender people, she was never far from a silly joke. “Being trans is not the only thing about me,” she said at one point, adding she was also a vegetarian. “I really, really, really did want to go vegan over Christmas,” she said, “but as a trans woman I just felt I’d put my dad through enough.”

Trans comedians have been appearing on British stages for decades. In December, the hugely popular Eddie Izzard made headlines after saying she wants “to be based in girl mode” and is using she/her pronouns, having worn dresses and heels onstage since the early 1990s. Debra-Jane Appleby, a trans stand-up, won the Funny Women comedy award in 2005, and Bethany Black, who is also trans, has been a regular on Britain’s comedy circuit for almost two decades.

In 2010, Black told The Guardian newspaper that “mostly people don’t care about me being trans.” During a recent video interview, she laughed when she was reminded of that comment.

“Yeah, that’s changed a bit,” she said. Back then, people “thought perhaps there were like 10 or 15 transsexuals in the world,” she said. “Now, they’re like, ‘They’re everywhere and they’re trying to get into sports!’”

Despite the fact she jokes about transphobia onstage, Black said the debate in Britain around trans people has taken a toll on her. “I was diagnosed with agoraphobia a couple of years ago, and a lot of that comes down to constantly feeling like I’m in this battle,” she said.

Also tiring are the comedians and TV shows that make lazy jokes about transgender people, Black said. Those had become such a feature of some high-profile comedians’ routines that James Acaster, another British stand-up, mocked this tendency in a 2019 set.

Yet many comics avoided those jokes when they were on the same lineup as she was, Black added. “No matter how much they are all bold, super pro-free speech, a lot of them suddenly don’t say it when I’m on the bill,” she said. One exception was the comedian Adam Rowe, she added.

Rowe has a routine in which he says the lingerie company Victoria’s Secret wouldn’t cast transgender or plus-size models in its shows.

In an email, Rowe defended the joke. “The routine isn’t transphobic,” he said, adding it was actually written to “trap people who aren’t listening properly into thinking that it is.” He said people got distracted by buzzwords.

Ives said she had seen comedians who aren’t trans do trans material, and it could be “hilarious.” After all, “I can laugh at myself,” she said. But, she added, “a lot the time it just feels like a cheap dig.”

Many times in her career, she has had to go onstage directly after a male comedian who’d made jokes about transgender women, she added. She would normally mock the comedian in response. “But that’s making the best of a bad situation,” Ives said. “I’d rather not.”

During her recent show, Ives gradually led her audience up the metaphorical Peak Trans, stopping along the way to make jokes about transgender people in sport and her own coming out. But then, as the climbing party got closer to the summit, one subject loomed into view. “I’m sorry,” Ives said. “We’re going to talk about J.K. Rowling.”

Ives first made a joke about Rowling’s recent novel “Troubled Blood,” which features a male killer who disguises himself as a woman. Ives said she really wanted to “be an activist and speak out about it.”

Rowling wanted “people like me to stop using women’s spaces,” Ives said. “And she wants me to use men’s toilets.”