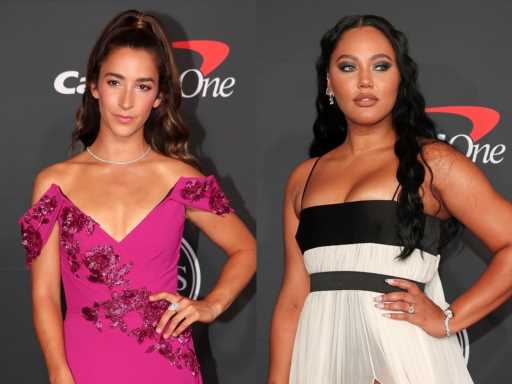 There’s been a bit of a drought in Hollywood red carpet events, as of late. Thankfully, the ESPY Awards were there to save us last night. Some of the biggest and brightest stars in the worlds of entertainment and sports came together to honor some incredible athletes last night. And we got a glimpse of a few pretty fabulous red carpet looks, too!

Let’s start with one of our favorite athletes — who also served as last night’s host. Steph Curry looked quite dapper in his suit, featuring a white turtleneck. The basketball star was joined by his wife, Ayesha Curry, who stunned in her gorgeous gown that featured a thigh-high slit. As it turns out, the ESPSYS were a full-on family affair for the Currys. Steph and Ayesha’s daughters Ryan and Riley joined their mom and dad on the red carpet for some great photo ops.

Naturally, there were plenty more stars who made some dazzling fashion statements on the red carpet. Aly Raisman stunned in her gorgeous and timeless fuchsia gown, while Kristi Yamaguchi rocked her own LBD. Among the men, Star Wars star John Boyega looked quite dapper in his bright red suit. As for couples, well, you know Russell Wilson and Ciara totally reigned supreme on the ESPYS red carpet.

Now that we’ve teased some of our favorite looks, why don’t you take a look at them yourself? See some of the best dressed celebs and athletes who attended the 2022 ESPYS.