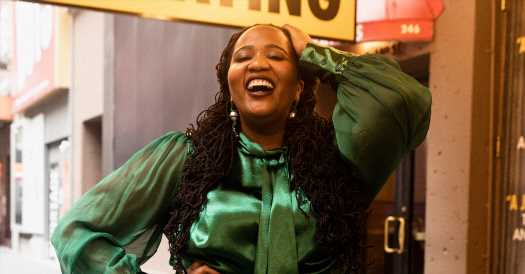 There has been an am-I-dreaming quality to Aneesa Folds’s life lately. That much she wanted to make clear.

Yes, that was her in the glittering gold jumpsuit at the Tony Awards, performing in knockout voice with the troupe Freestyle Love Supreme. But a few mornings later, sitting in a booth at a hotel restaurant in Manhattan’s theater district, she was still doing a mental double take at the memory of Broadway stars saying hello to her backstage “as if I wasn’t a pedestrian.” And meeting a reporter for a profile interview? That wasn’t normal either.

“I love that you’re talking to me as if this is regular for me,” she said, and laughed.

On the other hand, she is on her way back to Broadway with Freestyle Love Supreme. Founded by Thomas Kail, Lin-Manuel Miranda and Anthony Veneziale, the longstanding hip-hop improv comedy troupe got fresh attention with the rise of “Hamilton,” which led to a Broadway run two years ago. Now, it’s back for a limited encore engagement that starts previews on Thursday and opens Oct. 19.

Folds, who even offstage has an easy charisma, is a relative newcomer to the group. When she and Kaila Mullady joined in 2019, they were entering what had been all-male territory. Then, as now, they had only a week’s worth of rehearsals to acclimate before stepping in front of the first audience. 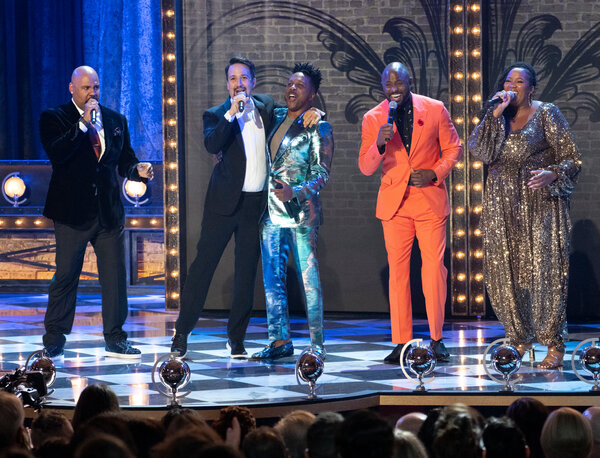 “You’re going into this space with all of these people that have been doing a show for 18, 19 years,” said Folds, 28. “They know each other like the back of their hands, and they’re like, ‘OK, we’re just going to improvise.’ And then you go to Broadway the next week and they put you onstage.”

In 2019, she spent rehearsals in survival mode, trying to soak up as much knowledge as she could about the mechanics of the show. This time feels different — more like “playing with your friends,” she said.

But to Kail, the show’s director, it was obvious even in the jam-session audition ahead of the original Broadway run that Folds, with her boldness and talent, belonged.

“I was in the session with Chris Jackson and James Iglehart, who have both been in the group for a long time and have both been on Broadway for a long time,” he said in a phone interview. “She was doing her thing, like full Aneesa, and they looked at me and they were like: ‘Bro. Bro.’ I was like: ‘I know! Like, try to be cool. She’s still in the room.’”

If Folds could turn back time — the way Freestyle Love Supreme does in one of its signature bits — and tell her child self what she is up to now, it might come as something of a shock. Growing up in Jamaica, Queens, she loved singing and felt safe blending in with a choir, but she was mortified whenever her talent was singled out for praise.

“I was afraid of my voice,” she said. “I just was very insecure.”

She had teachers who pushed and prodded her, though, and a mother who agreed when they encouraged her to do things like perform in the school musical. Her mother also found programs that helped her daughter blossom, like the Wingspan Arts theater conservatory in Manhattan and the Young People’s Chorus of New York City.

Still, musical theater — which, when you get right down to it, is what Freestyle Love Supreme does — was a tough sell for Folds as a child, partly because, she said, “it felt very white to me.”

At Repertory Company High School for Theater Arts, in the Town Hall building on West 43rd Street, Folds emerged from her shell, making jokes and rapping in the cafeteria. (That’s also when she came up with the rapper name Young Nees, which she uses in Freestyle Love Supreme.) And thanks to Miranda’s “In the Heights,” a show she first listened to on a Young People’s Chorus trip to Austria, then saw repeatedly on Broadway, she thought there might be a place for her after all.

“That was the show that made me feel like, OK, they’re changing musical theater,” she said.

But not nearly fast enough. This spring, Folds told Playbill that most of the racist encounters she has had in her life have been in theater.

“When I wasn’t doing Broadway,” she said, “I was doing a lot of regional shows. I’ve been in a lot of spaces where I was the only person of color, so as you can imagine, I’ve heard all sorts of things.”

Like comments from wig designers who didn’t know how to work with Black hair — remarks so painful and common that Folds pulled in her shoulders to make herself smaller as she spoke of them.

Once, she said, she was assigned to actor housing in a home whose white owner had a collection of mammy dolls, and took them out to show her.

This season, productions by Black artists are abundant on Broadway, but Folds said she feared those higher numbers will be a mere blip before the industry reverts to its old ways.

“I really pray and hope that it doesn’t,” she said. “So that the little girl that’s sitting in Queens, New York, who maybe wants to do musical theater, does see herself.”

It was during a visit home, when Folds was a college student at the Hartt School at the University of Hartford, that she first saw Freestyle Love Supreme. An instant fan, she wanted to do what they did. “It felt like everything I was good at,” she said.

So in 2019, the year after the troupe started an academy, she applied. And while Kail said the program is not meant to be a training ground for new members, people there quickly told him they had found someone.

With the addition of women, Folds said, suddenly the group had a wider pool of topics to talk about onstage. She particularly relishes the memory of a woman shouting “period cramps” when Veneziale was collecting audience pet peeves for the cast to rap about.

She did her rap, the crowd screamed with delight, and women came to the stage door and raved about it.

“It’s awesome to be one of the women in the group,” Folds said. “We’re here and we’re switching it up.”

Freestyle Love Supreme has led to work for her on other projects, including Miranda’s recent animated musical for children, “Vivo,” and his film adaptation of Jonathan Larson’s “Tick, Tick … Boom!,” out next month in theaters and on Netflix. In that movie’s recently released trailer, she is in the opening shot.

All this contributes to Folds’s pinch-me feeling. A small, doubting part of her wonders if she is where she is because her higher-profile colleagues are also her friends. A more brisk and confident part knows that she didn’t fall into any of her success — though if she’s a pleasure to be around, that doesn’t hurt.

“My name does mean friendly and well-liked,” she said. “I try to live up to it. Be nice: That’s the first rule of theater.”