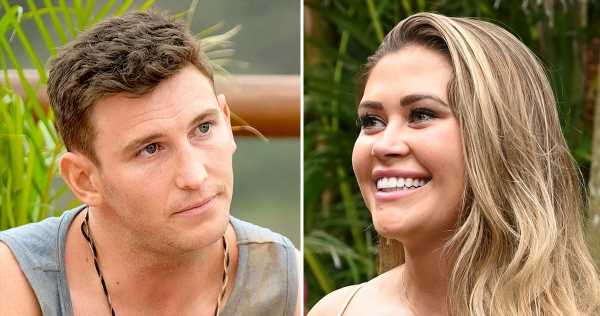 Sometimes the view from Mexico is even better on your couch.

Dean Unglert, Kaitlyn Bristowe and more members of Bachelor Nation couldn’t help but weigh in as the drama between Blake Horstmann and Caelynn Miller-Keyes played out on the two-night premiere of Bachelor in Paradise season 6.

Blake, 30, came under fire during the Tuesday, August 6, episode of the ABC dating series when Caelynn, 24, revealed that the duo hooked up the night before he had sex with their costar Kristina Schulman.

“I feel like a slimy, disgusting secret that you’re ashamed of,” the former pageant queen told the sales rep on the beach in Mexico. “We had something, dude.”

After Blake failed to defend himself on the episode, he took to Instagram to “address what is being portrayed” on the show.

“I NEVER ghosted Caelynn, I NEVER called her a mistake and I absolutely NEVER EVER EVER silenced Caelynn,” he wrote. “I never expected to have to do something like this, but after finally seeing the episodes I feel like I have no choice but to release the text exchanges between her and myself. This is the last thing I wanted to do, but my name and character are being attacked. My name is all I really have.”

Blake subsequently uploaded (and later deleted) seven screenshots of text messages between the twosome. The first set of messages, which was from their night together at the Stagecoach music festival in April, made it seem like Caelynn initiatedthe hookup.

“Dude. It’s fine. Chill it’ll be good. Come on loosen up. Let’s just have a good time man,” Caelynn texted Blake, noting she “just ordered an Uber” and wanted to come over “strictly for sex.”

“Nothing more nothing less. I’m just trying to be honest,” the former Miss Carolina USA wrote.

Blake then shared an exchange between the duo that allegedly took place one week before they started filming Bachelor in Paradise.

“I’m scared. I’m thinking of pulling out of paradise,” Blake texted, adding that the pair “f–ked up so bad.”

“If we play it off as not being a big deal then it’s not. Everyone hooks up in this world,” Caelynn replied.

Bachelor in Paradise airs on ABC Mondays and Tuesdays at 8 p.m. ET.

Scroll through to see who weighed in on the drama from Bachelor Nation: