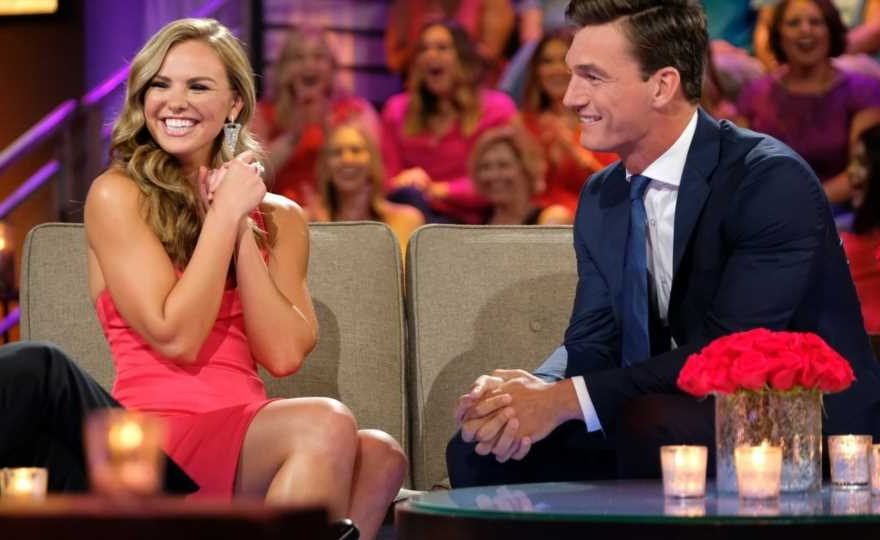 Now that the whole mess with Jed Wyatt is practically in the past, Bachelor Nation has been rooting for our resident rose-giver to find her real match — and that may be happening sooner than expected. On Friday, Bachelorette fan-favorite Tyler Cameron was spotted leaving Hannah Brown’s home… early in the morning. Per TMZ, the two reportedly went on a date Thursday night. So, judging by the morning-after snapshots, we’re inclined to say it must have gone pretty well.

TMZ released the photos of Cameron, Brown’s runner-up, heading out around 10 a.m. on Friday morning dressed in casual athletic clothes and toting his backpack. Brown also looked super-casual as she walked Cameron out. While the two weren’t photographed kissing or anything that might confirm they are now romantically involved, it’s clear it wasn’t a coincidence they were both on the stoop of Brown’s place at the same time.

That’s not to say there couldn’t be another explanation for Cameron’s appearance at Brown’s home in the early hours of the day. Maybe the two worked out together. Or, hey, maybe he dropped by with an impromptu cup of coffee and hot breakfast. As cliché as it is to say it, we shamelessly hope these two are cooking something up.

Fans have been anxiously awaiting any further news of a possible relationship since the pair reconnected during this week’s live Bachelorette finale show. ICYMI, Brown ultimately gave her final rose on the show to Wyatt. Although the pair got engaged, Brown revealed during the finale that she broke things off mere weeks into her engagement after learning what the rest of us have known for a while — Wyatt had a serious girlfriend when he came on the show, and he effectively ghosted her.

When she and Cameron got to see each other again during the finale show, Brown asked, “You’re an incredible buy, and I’m a single girl… so, I don’t know, maybe we could go for a drink and just hang out?” Not surprisingly, Cameron was game. Brown further fueled the Bachelor Nation fire when she took to Instagram to confirm “the drink is happening.”

Now that the drink (and maybe next-morning breakfast) has taken place, it remains to be seen if Cameron and Brown keep the connection going. But the other Bachelor Nation rumor heating up is that Cameron could be tapped as the franchise’s next leading man, meaning this budding romance may come to a crossroads sooner rather than later.