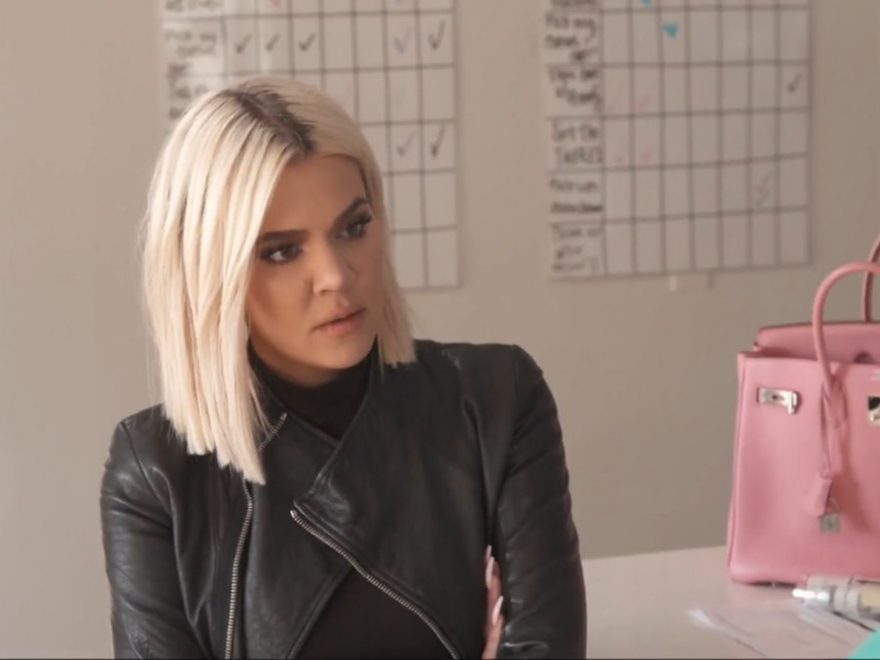 You think you know, but you have no idea. The new Keeping Up With the Kardashians Season 17 trailer promises to tell "the whole story" behind what fans have read in the media about the famous family. It should come as no surprise that the new season of E!’s KUWTK (premiering on Sunday, Sept. 8 at 9 p.m. ET) will show the Kardashian-Jenner clan dealing with the aftermath of the Jordyn Woods and Tristan Thompson drama. And it seems that Kylie Jenner may try to play the intermediary between one-time BFF Woods and her big sis, Khloé Kardashian.

“She wanted to write you a handwritten something,” Kylie reveals during a conversation with Khloé in the video.

"If she wants to write me a letter…" Khloé begins, before her sister cuts her off to ask, “Should I give you her address?” The priceless, less-than-pleased look on the Revenge Body star’s face seems to say it all.

While the sneak peek doesn’t explicitly say that they’re referring to Woods, E! previously released a clip of more footage from the same scene which does show Kylie and Khloé discussing Jordyn — particularly whether or not Kylie misses or wants to be friends with her again.

"I think that this whole Jordyn situation needed to happen for a reason — for me, for her, for you, for everybody," Kylie explained in the scene. "She was my security blanket, she lived with me, we did everything together. I just felt like ‘oh I have Jordyn, I don’t need anything else.’ And I feel like there’s a part of me that needed to grow without her. Sometimes people are there for certain reasons at certain times in your life and are not there for others."

For anyone who somehow didn’t keep up with that "situation," here’s a quick recap: Khloé and Tristan split in February, following reports that the NBA player and Jordyn reportedly hooked up at a party. Shortly thereafter, Jordyn admitted on Jada Pinkett Smith’s Red Table Talk, that she and Tristan did kiss at the bash but denied that their interaction went any further than that.

True to KUWTK form, of course the behind the scenes look at the drama doesn’t end there. “This whole thing sucks,” Khloé says while wiping tears from her eyes, in another seemingly emotional moment.

“He doesn’t even speak to Khloé,” Kim Kardashian is seen fuming to pal Jonathan Cheban in an earlier scene. “Khloé invited you. Be f*cking cordial.”

From those clues, People reported that Kim was referring to how Tristan reportedly behaved toward Khloé at their daughter True’s first birthday party in April. “Tristan attended the birthday party with some friends,” an unnamed source told People at the time, noting that Tristan "kept his distance" from his ex. “Khloé seemed a bit nervous about having him there, but there was never a question if he would be invited. It’s super important to Khloé that True spends as much time with Tristan as possible. Khloé wants True to have a great relationship with Tristan.”

Other trailer highlights include Scott Disick telling ex-girlfriend Kourtney Kardashian that he wants her to be “comfortable” with his girlfriend, Sofia Richie. “It does take a toll on me,” he admits to Kourt.

Also sure to take a toll on Scott: He reveals in a phone call to Kourtney (which Khloé is listening to on speaker, too, naturally), “There’s a chance that I would have to go to prison.”

What was he referring to? Stay tuned for all of this, and, surely, much much more on the show in September.