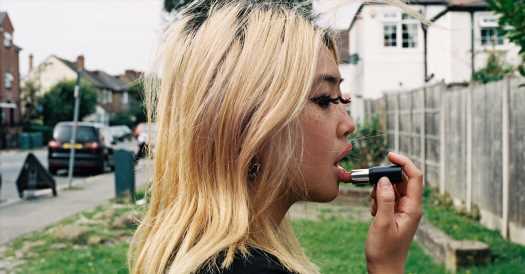 In early March, Bea Kristi was holed up in the house she shares with her parents and younger brother, sick with what she’s pretty sure was the coronavirus. “I was stuck inside my bedroom with, like, no daylight,” she said, perched on the edge of her unmade bed in that same small room in Harrow, a leafy borough northwest of central London, on a Zoom call in mid-September. “My parents would slide food under my door. It was crazy.”

Bedrooms loom large in the creative life of the 20-year-old singer and songwriter, who records as beabadoobee. Kristi began making music in hers just three years ago, after her father gave her a guitar. The very first song she wrote, a spare, sweet tune called “Coffee,” has been streamed nearly 50 million times on Spotify. (The name beabadoobee came from an Instagram moniker she was using.) Other early songs followed a similarly frugal musical template and were tagged as “bedroom-pop,” a burgeoning subgenre associated with artists like Clairo, girl in red and Cavetown, who recorded tracks with emotionally revealing lyrics and spare instrumentation.

The irony of Kristi’s virus lockdown? She was preparing to release her debut full-length album, “Fake It Flowers” (due Oct. 16), which is the culmination of a massive sonic shift — her grand departure from the bedroom. The album features crunching guitar riffs and propulsive drumming on tracks that could fit seamlessly among songs by Veruca Salt, the Lemonheads and Belly on MTV’s alternative rock showcase “120 Minutes” in the mid-1990s. Her challenge, though, was figuring out how to expand her aesthetic without losing its intimacy. 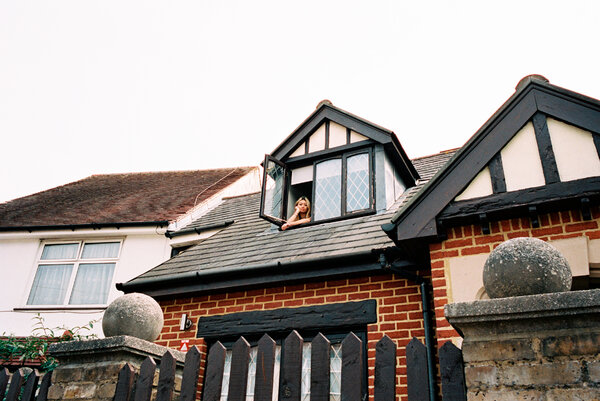 “We’re straying from the idea of bedroom pop sonically but ‘Fake It Flowers’ was still me writing songs here,” Kristi said, motioning toward walls filled with photos of friends, a tricolor tapestry and iconic posters of Tom Hanks from the film “Big” and the Beatles at Abbey Road. Clothes spilled from a small dresser tucked into a corner beneath the slanted ceiling, and hazy midafternoon light streamed in from a recessed window behind Kristi, who wore a green Marshall University sweatshirt and a necklace with a daisy pendant.

“I feel like everything has been created in my bedroom,” she said. “I vibe off small environments.” She’s begun thinking about getting a place of her own and recently decided she wanted what she called “a fairy-looking house.” “I literally typed in ‘fairy houses in London,’” she said. “My dad was like, ‘Bea, you can’t type that on Google.’ I’m planning on moving out next year, but I’m just not mentally ready.”

Kristi was born in Iloilo City in the Philippines, and emigrated with her parents to Camden, a cosmopolitan north London neighborhood, when she was 3. (They moved to her current house in Harrow three years ago.) She was an active child. She played violin, swam competitively, flirted with gymnastics and ballet, and recalled performing at a school talent show as a preteen.

“I did Britney Spears’s ‘Lucky’ and dressed up as her,” she said. “It was lit.” But she had what she described as “a major breakdown” around age 11, and quit just about everything. “I was a dream kid until I hit puberty.” Growing up as one of few Asian children at an all-girls Catholic school led to feelings of intense alienation. “I remember being 14 and being embarrassed about my culture, wanting to be like all the other girls,” she said. Even among London’s Filipino community, she rarely felt she belonged.

“I liked different things, things they didn’t necessarily get,” she explained. “It was, ‘You like things that are too white to be Asian, and you’re too Asian to be white.’”

This sense of dislocation led to early drug use and enduring mental health struggles. Music proved a stabilizing force. “Getting that guitar at 17 was like a savior, because I could finally express myself in a creative way,” she said. “I could just let out everything that burdened me.”

Kristi originally wrote “Coffee” for her boyfriend, an aspiring filmmaker named Soren Harrison, whom she’d first met when both were 15. (Previously, Kristi had told her classmates she was gay. “I did have feelings for girls but I just told everyone I was gay because no boy liked me ever,” she said. “Honestly, I was bisexual.”)

Harrison described hearing “Coffee” for the first time as “one of the best moments” of his life. “I always thought she was the best storyteller I’d ever met but I didn’t know she could do that,” he said in a phone interview. “She put ‘Coffee’ on a cassette for our anniversary. I’d never heard my girlfriend’s voice so clear.” Harrison sketched the cover art for the single, and would go on to co-direct beabadoobee’s videos.

“Coffee” was an unlikely, if thoroughly contemporary, success story. Kristi recorded the song in the bedroom of a friend, who uploaded it online. The influential YouTube channel 1-800-LOVE-U plucked it from the ether, which helped attract Dirty Hit, the London-based label whose roster includes the 1975 and Wolf Alice.

The song was already a modest viral hit when the Canadian emo-rapper Powfu looped the hook into his downbeat tune “Death Bed” in late 2019. Powfu’s song became the favored backing music for countless TikTok videos of users confessing their secret love to unknowing crushes. The meme became so popular that the song was heard more than 10 billion times on the site just between February and May this year. By June, somewhat predictably, it popped up in a Dunkin’ commercial.

The reflected glow has been a boon for beabadoobee as a business, but for Kristi herself, who had little to do with “Death Bed” beyond approving the sample, it’s been a mixed blessing. “There were people who involved me with ‘Death Bed’ as that super-annoying chick that plays in the background,” she said. “But that song is a soundtrack to so many people’s TikToks. If there’s a cringey TikTok with that song in background, so be it. The fact that people like the music means something. They can scroll down and discover my other music.”

The songs on early beabadoobee EPs resembled “Coffee,” with Kristi’s hushed voice spilling her angst and heartache over extraordinarily pretty guitar melodies. But their simple productions were more a function of necessity than taste: “I’d listen to bands and be like, ‘I want to sound like this,’ but I just had a mic, guitar and bass.”

She gradually enlisted bandmates — the bassist Eliana Sewell, the drummer Louis Semlekan-Faith, the guitarist Jacob Bugden — and a producer, the ex-Vaccines drummer Pete Robertson, who helped make the noises in her head a reality. Her 2019 EP “Space Cadet” was a turning point. It plays like an unabashed love letter to ’90s alt-rock, complete with a shout-out to one of the era’s enduring figureheads, “I Wish I Was Stephen Malkmus.”

“Every EP I’ve released described a time in my life,” Kristi said. “‘Space Cadet’ was when I thought, ‘This is who I am. I’m going to do grunge-rock forever.’ Then I wrote ‘Fake It Flowers,’ and was like, ‘I have no idea who I am.’”

In the past, Kristi’s songs often found her pining for love and companionship, or convincing herself everything would be all right. But dynamic, angry new tracks like “Care” and “Dye It Red,” lash out. Love, she’s discovered, is a complicated beast. On the swooning, string-drenched ballad for her boyfriend, “Horen Sarrison,” Kristi undercuts the verses’ gauzy images of “pavement after the rain” and “the last empty seat on the train” with her admission in the chorus, “I don’t want you to feel comfortable.”

“The third song in, I realized the theme was everything I was supposed to tell someone but couldn’t,” she said. As Robertson noted, “People respond to music that comes from a natural, unforced place, and Bea does that. What she sings is the truth from deep down.”

The whole process was an emotional excavation, with songs that nod toward childhood trauma and, in the case of the infectious, punchy lament, “Worth It,” Kristi’s own romantic infidelities. Harrison, who’s had to get used to seeing their relationship’s ups and downs chronicled in her songs, initially resisted working on a video for “Worth It.”

“It was something way too personal that you don’t really want people to hear,” he said, “but Bea wrote it to get stuff off her chest and put it into a piece of art.” He used the video to do the same. The resulting clip features Kristi in a hotel room, while Harrison’s own image flashes on a video phone, desperate to get in. “When she walked into that hotel room we built, there was so much detail I put in — personal Easter eggs, Polaroids, certain pieces of clothing — that she had a full-on panic attack.”

Although the album’s quieter moments like “Back to Mars” and “How Was Your Day?” recall beabadoobee’s lo-fi roots, the album’s overall sound was deliberately forged, in part through playlists traded back and forth between Kristi and Robertson. “They were all over the map,” said Robertson. “A lot of Sonic Youth, the Cranberries, Smashing Pumpkins, Björk, Slowdive, Snail Mail, Jeff Buckley, Cocteau Twins, Ariel Pink, the Vaselines. She loves that ’90s era, so it was about trying to highlight those influences but put them in a new context.”

Although Kristi was born in 2000, ’90s rock was a staple in her house growing up. “So it feels like home, like a warm hug,” she said. That sense of comfort has only deepened amid the creeping existential dread of 2020. For many, the 1990s have come to represent a simpler time: before social media, the attacks of Sept. 11 and the Covid-19 pandemic. “There’s something about that time that people of this generation cling to,” she said. “Everything was pure, calm and just so much more genuine and innocent back then.”

beabadoobee feels like a part of a low-key movement that includes bands like Snail Mail, Bully, Beach Bunny, Diet Cig and Soccer Mommy: female songwriters in their 20s mining the 1990s for inspiration.

“So much stuff at that time had this catchiness but also went against the grain,” said Sophie Allison of Soccer Mommy, who released a split single with beabadoobee earlier this year. “It was before the time of recorded music basically being worth nothing. Rock stars could be gigantic purely off music. That’s partially why so many people are inspired by music from that time.”

Despite Kristi’s retro influences, her core audience looks a lot like her. “It’s heartwarming seeing Filipino girls coming up and being like, ‘You made me get a guitar,’” she said. “I’m writing these songs for myself because they help me. But the fact that girls are messaging me saying this is exactly the situation they’ve been through, it’s like, ‘Wow. I’m not alone.’”

Even if beabadoobee’s music sounds less homemade than it once did, Kristi hopes it still finds its way into many bedrooms.

“I do this thing every night that I feel everyone has to do: Dance in front of your mirror in your underpants,” she said. “It’s an amazing way to make yourself feel happy. I put on Veruca Salt and I rock out.” She nodded toward the mirror on the sliding doors of her own bedroom closet. “I wanted to make something like that so girls can do the exact same thing.”