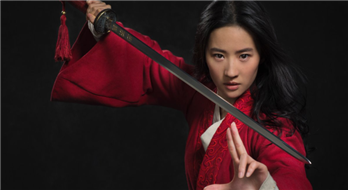 Social media users are calling for a boycott of Disney‘s upcoming live-action version of Mulan after the film’s lead actress, Crystal Liu Yifei, backed Hong Kong police in their fight against pro-democracy protesters.

“I support Hong Kong’s police, you can beat me up now,” read the Chinese-language message, which Liu shared as an image on Weibo. The message quoted Chinese reporter Fu Guohao, who has been lionized in China after protesters tied him up and attacked him at a Hong Kong airport on Tuesday.

The image also featured a message reading, “What a shame for Hong Kong,” written in English.

Actress Crystal Liu Yifei shared a message on Weibo supporting police in Hong Kong, which was originally posted by the state-run People’s Daily in China, on Aug. 14.

The original image was created by the People’s Daily, the official newspaper of China’s ruling Communist Party.

Liu retweeted the post, adding the hashtag #IAlsoSupportTheHongKongPolice, along with a heart and a strong arm emoji.

The post racked up tens of thousands of likes and shares within China, where government censors maintain strict control over political speech on social media.

However, reaction outside of China’s censorship bubble was extremely negative, with thousands attacking Liu under the hashtag #BoycottMulan.

Many people on Twitter accused Liu of supporting police brutality in the wake of several violent clashes between law enforcement and protesters in Hong Kong.

The semi-autonomous territory of China has been racked by unrest over the last month, as pro-democracy protesters have flooded the streets to denounce China’s creeping influence over their freedoms. The China-backed government of Hong Kong has been trying to quell the unrest.

“So disappointed!” one user wrote on Twitter in response to Liu’s message. “I love Mulan but I cannot tolerate such thinking!”

“How tone deaf do you have to be to support police brutality when you just filmed a character who is supposed to stand against oppression in its raw form?” another person wrote.

Some suggested the actress should have simply stayed out of the debate.

Several people pointed out that Liu, who is a naturalized American, enjoys the freedom to say what she wants. Meanwhile, protesters in Hong Kong are fighting to maintain that same freedom.

Disney released its first trailer for Mulan in July. The film stars Liu as the titular hero, who masquerades as a man to take her father’s place in the Chinese Imperial Army.

Mulan is the latest in a growing line of live-action remakes based on animated Disney properties.

Disney’s latest adaptation, The Lion King, has raked in more than $1.3 billion at the box office since it was released on July 19, according to the site Box Office Mojo. The film made more money in China than in any other country outside the United States, with a gross total of US$116.7 million as of Aug. 11.

Disney will likely aim to beat that Chinese box office number with Mulan, which features an ethnically Chinese cast fighting for medieval China against a foreign enemy.

Liu has not issued any follow-up messages in response to the backlash.