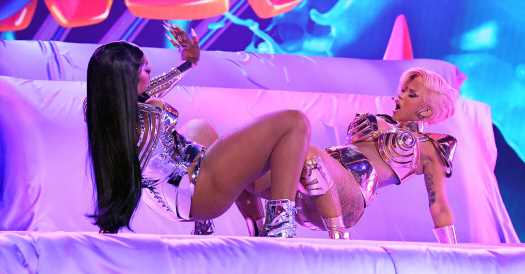 If you needed any more evidence that Cardi B and Megan Thee Stallion remain unbowed by the conservative pearl-clutching that followed the release of their raunchy duet “WAP,” the Grammys had it.

In Sunday’s performance of “WAP” — their first ever on television — Cardi B pole danced on the heel of a giant stiletto and the rappers, wearing silver armor-like leotards, crawled around and executed intricate choreography on a massive bed. The women twerked triumphantly in several different positions, and although the song’s trademark line was sanitized to “wet, wet, wet,” much of the original lyricism made it to the prime-time program.

When the “WAP” music video debuted in August, it set the internet ablaze with its R-rated lyrics and even more suggestive choreography (Cardi and Megan splashing around in fishnets). The song topped the charts for weeks, inspired myriad TikTok memes and debuted at No. 1 on Billboard’s Hot 100.

Megan Thee Stallion, who won best new artist earlier in the show, opened the brief set with two of her hits, “Body” and “Savage,” which is nominated for record of the year. She wore a glimmering leotard and tall white feathers on her head, which, along with the tap dancers, gave the performance a Roaring Twenties feel. Then Cardi B hit the stage in a bubble-gum pink pixie cut to perform her latest single “Up,” before the rappers teamed up for the crowd pleaser.