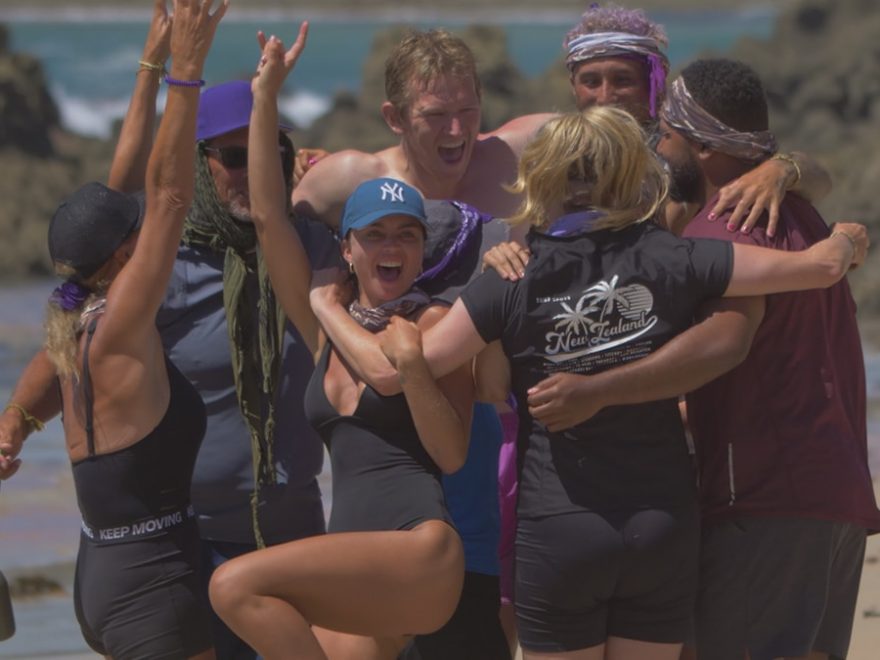 Last night we caught a glimpse inside Angela Bloomfield’s brain. It was full of evil laughs and sinister schemes: The most popular being ‘get rid of Richie Barnett’.

Didn’t her parents teach her to treat others how she’d like to be treated?

Thanks to Bloomfield’s high school maturity, Barnett lost his captaincy to Jess Tyson. And as a result, he couldn’t get away from Katipō quick enough, basically begging to be put up for the endurance challenge alongside Edna Swart, from Team Repo.

The challenge was a “simple military test” and if you know anything about the military,”simple” means hard for normal people. So when host Matt Chisholm announced the challenge would be a thigh-burn inducing wall sit crossed with a squat hold, I almost cried for Barnett and Swart.

Swart went ahead and described it like this: “They break your body, then your mind.”

Obviously, it’s a lot of fun, maybe the next hot party activity?

Fourteen minutes in, and our competitors weren’t even sweating (I was though). Just when I was convinced they weren’t actually real people, Swart pulled out of the competition. A devastating loss for the competitive boss babe who couldn’t help but shed a few tears.

Lucky for Swart, she is in Team Repo and they surrounded her in love, assurance and kindness.

Meanwhile, Barnett won his team a whole bunch of food plus a clue and a captain’s card. Back at camp they all celebrated and happily took it despite backstabbing him earlier in the episode.

He decided to keep the clue to himself, and before Katipō could ask what it was, he distracted them with some food.

A smart move by the man who may have caught a whiff of Bloomfield’s master plan.

Tonight’s episode wasn’t very spicy but we did get a super sweet moment where Buck Shelford took the kids – Kim Crossman, Chris Parker and Brynley Stent – out to find some kina.

“It’s really funny because I don’t seek a lot of validation in my life, but I do seek quite a lot from Buck,” Parker told the confession cam as their kind of father/son relationship blossomed.

Sweet baby Jesus, if this season is providing anything it’s my desperate want, no wait, my desperate NEED for a Parker/Shelford spin-off.

Parker already has a name for it. “Buck goes wild with three dumb white comedians.”

During the team face-off, our competitive queen, Swart, decided to sit out alongside Shelford and Crossman and cheer on Repo. And they took the lead almost instantaneously while Barnett from Katipō struggled to get past the first part of the challenge.

“I nearly wondered if it was on purpose,” fellow team member Lana Searle told the confession cam.

Repo unsurprisingly won and, as the losers, Katipō had to do a matinee performance for them.

Bloomfield came up with the great idea to impersonate the celebs and it earned a few laughs. Searle showed us her sick dance moves as she impersonated Repo team captain, Lance Savali.

“If that’s a replica of me trying to dance, I should never dance again,” Savali laughed.

After the matinee, Repo discussed who would go up for elimination. JJ Fong put her hand up, as did Shelford, and Savali was gobsmacked.

“What is going on with this team?” he asked the confession cam.

In the end, Savali decided that actor, producer and star of Creamerie, JJ Fong from Team Repo, would face off against radio presenter Lana Searle from Team Katipō in an elimination round that saw the celebs build and cross a bridge, then build a puzzle as high as they could.

The puzzle was meant to be 1.5m high but the pesky wind put an end to that – so it was the celeb with the highest puzzle that would win.

Just when the buzzer buzzed and Savali looked about as cautiously optimistic as our government, Fong’s tall tower collapsed, and Searle took out the win.

“It feels bittersweet to be leaving the team,” Fong sighed.

But it was her parting words that were perhaps the best we have had this season, “Cook your own rice, b******.” And with that, Fong was outta there.

Searle won a piece of pirate gold and that was that. Come back tomorrow to see who says goodbye next.

For all the inside gossip and behind the scenes stories, listen to Inside Celebrity Treasure Island hosted by S2 contestant Kim Crossman!