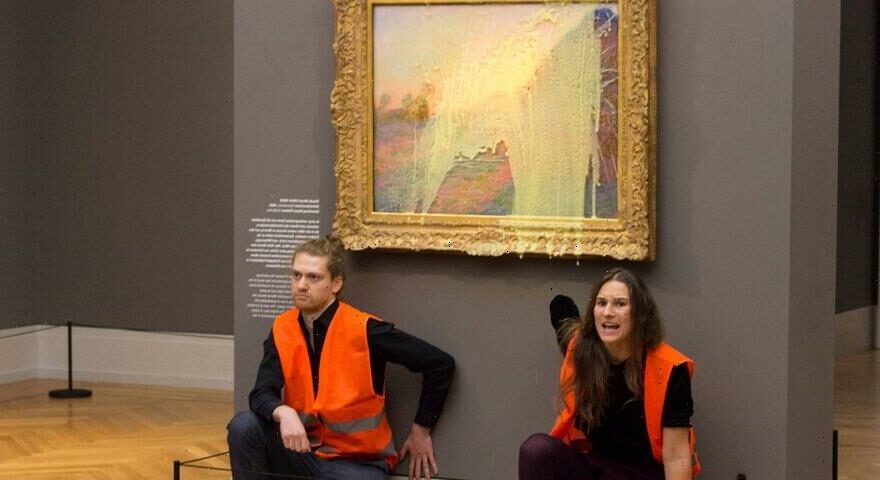 Claude Monet’s Grainstacks painting was recently defaced by two activists, the latest in a recent spate of “art attacks” that aim to draw attention to climate change. Housed in Potsdam, Germany’s Museum Barberini, Grainstacks was painted by Monet around 1980 and is one of 25 paintings the artist created that depicted the stacks of hay around his residence in Giverny, France.

As shown above in the video from Last Generation, a German activist organization that battles climate change, a man and a woman tossed instant mashed potatoes onto the painting before gluing their hands to the wall — similar to the tomato soup-tossing individuals that defaced Van Gogh’s Sunflowers painting earlier this month at the National Gallery in London. The woman, 25-year-old Mirjam Herrmann, then shouted that the world was in a climate catastrophe, and all that everyone who was watching was afraid of was “tomato soup or mashed potatoes on a painting,” calling back to the Sunflowers protest.

A post on Last Generation’s website noted that the painting, which was covered in glass, had not been damaged but the adverse weather effects caused by climate change have been destroying lives and property across the planet. The museum confirmed that the painting had indeed not been damaged, and stated that Grainstacks, which sold for $111 million USD in 2019, would be back on display by Wednesday.

Besides the Monet and Van Gogh attacks, other European activists have been attempting to call attention to climate change by defacing art or causing a scene in museums. In Italy, activists have glued themselves to works in Florence’s Uffizi Gallery and a sculpture in the Vatican, and in Britain, activists affixed themselves to several paintings housed in London’s Royal Academy.

Both Herrmann and the other activist — who was simply identified as “Benjamin” — were taken to jail on Sunday.

Elsewhere in the art world, Hypebeast visited the studio of Heather Benjamin (not related to the above-mentioned Benjamin), a painter who creates diaristic artworks that shatter sexual perceptions.
Source: Read Full Article