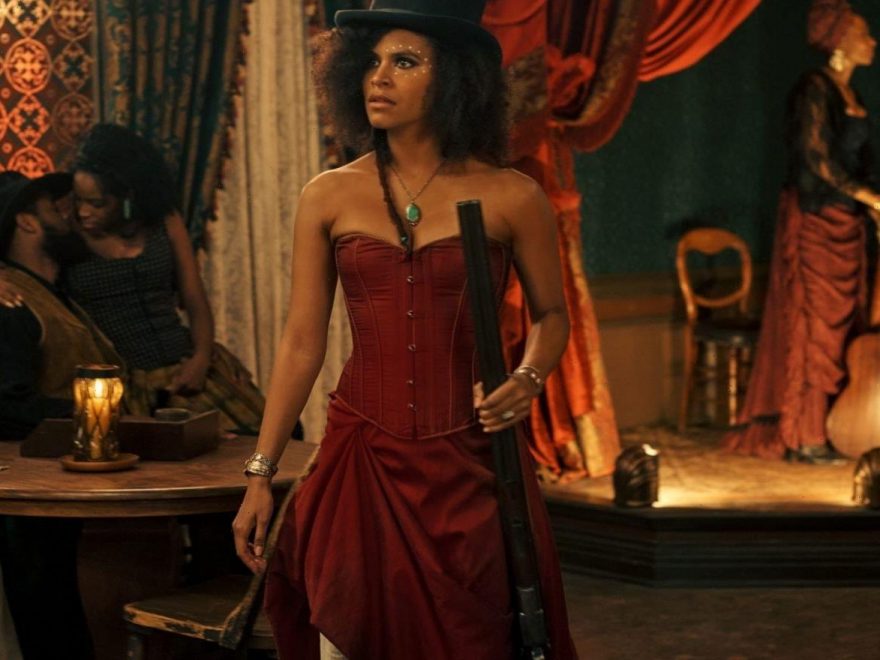 The Harder They Fall has been widely acclaimed for its diversity but the erasure of one of the dark-skinned Black protagonists also highlights Hollywood’s colourism problem. What is the true story behind Stagecoach Mary?

Netflix’s mission to bring us a popular modern cowboy story seems to be an exciting success. The Harder They Fall is now available to stream on the platform, and since its release on 3 November, it has consistently ranked in the Top 10 UK charts.

The aim of the new movie is simple: to do away with whitewashed misconceptions about the wild, wild west and show that, actually, many cowboys and girls were Black, too.

But as fans have been keen to point out, many of the characters within the ahistorical movie are based on real-life people. That’s why the casting of Zazie Beetz as Stagecoach Mary has been a topic of dispute since its announcement.

Stagecoach Mary in The Harder They Fall is actually based on real-life Mary Fields.

Beetz, who is a mixed German-American actor and starred in Joker, plays Stagecoach Mary. The real-life Mary Fields was the first African American female star-route mail carrier in the United States and was a formidable figure that was loved by many for her unwavering generosity and dedication to her job. It’s important to note though that Mary was a dark-skinned Black woman, so the casting of Beetz only brings Hollywood’s pervading colourism problem to the fore.

With the movie being celebrated for bringing cultural diversity to a typically whitewashed genre of American film, specifically choosing to not represent Stagecoach Mary accurately highlights wider problems within cinema. Fans have been quick to call on the casting directors for clarification, to no real advantage:

When dark-skinned Black female actors who share Mary’s complexion and frame could have been picked, the question remains: why was a slim, mixed-race woman picked instead?

Speaking to Netflix before the release of the film, The Harder They Fall director, writer, producer and composer Jeymes Samuel said:

“After this movie, no one will ever say there were no people of colour in the Old West. So we had to remember as we were making this movie: it would be fun to make but [it is] also a true historical statement. Black people, Asian people, all people of colour and women deserve a film like this that is done on an epic scale.”

Despite this commitment to diverse casting, the decision to ignore other darker-skinned Black female actors for the role is just a reminder of how colourism prevails. Samuel is right in saying that all people of colour and women do “deserve a film like this”, which makes it all the more disappointing that a dark-skinned actress wasn’t cast for Stagecoach Mary. Especially when the opportunity to do so seems apparent to the community who have critiqued the film.

The legacy of Stagecoach Mary within this part of history is so important because she was a prominent figure in a time and society that revered white men.

So what is the true story behind Stagecoach Mary?

Stagecoach Mary, formally known as Mary Fields, was a Black pioneer who protected the mail carrier stagecoaches in the wild west.

Although her exact birth date is not known, like many enslaved people of the time, Mary is believed to have been born around 1832 into slavery.

The exact movements of her life are not catalogued, but after the end of the American Civil War, Mary was freed and worked on the Mississippi River on riverboats or as a servant for families on the way.

Settling in Toledo, Ohio, Mary worked as a groundskeeper at the Ursuline Convent Of The Sacred Heart. The calm, religious environment meant that Mary’s “gruff style and penchant for cursing” usually raised eyebrows. The nuns would often complain about her “volatile temper” and “difficult nature”.

She was subsequently kicked out of the convent, and afterwards, developed a reputation for gunfighting, hard liquor and starting various small businesses. Eventually, Mary got a contract in 1895 to become a star route carrier – which meant that she was an independent contractor who carried mail using a stagecoach.

Her job was, essentially, to protect the mail on her route from thieves, bandits and generally not-so-great people. The role was so momentous for the time because she was only the second woman in the United States and the first African American woman to serve in that role.

She was nicknamed Stagecoach Mary or “Black Mary” and always carried a rifle and a revolver. Loved by locals, she would often intimidate bandits away with her (approximate) six foot height and 200 pound stance. She always remained generous to children and locals – she is said to have even built a schoolhouse and chapel, while tending to several large gardens – and for eight years, she remained loyal to her role of protecting and delivering mail until her retirement.

Eventually dying on 5 December 1914, her funeral was one of the largest the town of Montana had ever seen.

While it’s great to see her legacy celebrated on screen, many fans felt robbed of the chance to see a fat, dark-skinned Black woman take the lead in such a popular Netflix blockbuster.

The Harder They Fall is available to stream on Netflix now.