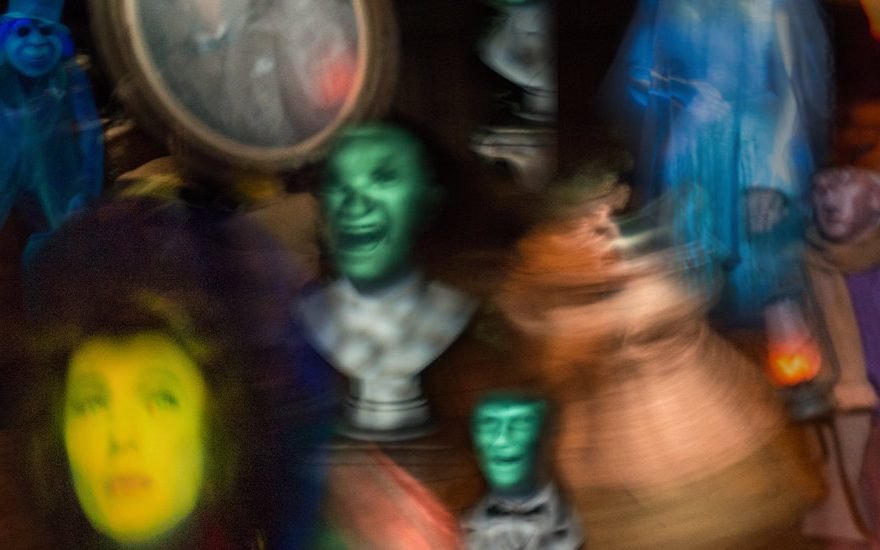 One summer visit to Disneyland after another, a young Tom Morris stood outside a mysterious set of locked gates, peering up at a stately, old-fashioned manor sitting just out of reach and wondering what awaited inside.

When those gates in Anaheim, Calif., finally opened in August 1969, Mr. Morris and others entered what became one of the most beloved and long-lasting attractions at any of the Disney theme parks: the Haunted Mansion, a macabre ride filled with mystifying illusions, eerie inhabitants and 999 grim, grinning ghosts, having a delightful time in the afterlife.

For Mr. Morris, who later became an Imagineer (a Disney employee who designs resort attractions), every element of the dark ride was fascinating. There was something about the music — the theme song, “Grim Grinning Ghosts,” plays throughout the ride — the smell of the hydraulics, the “old-fashioned showmanship.” He took a spin through the Mansion twice each trip, a rare sign of dedication back when two rides at Disney required two separate tickets. And he found himself doodling pictures of the ride in class. 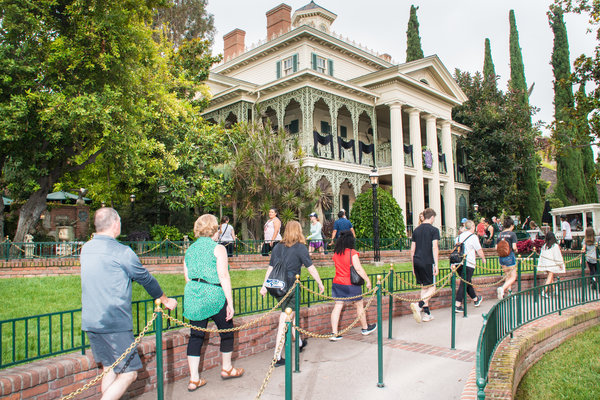 Surely, Mr. Morris thought, he was the only one with this level of adoration for the Haunted Mansion. Fifty years later, it’s clear that has never been the case.

The Haunted Mansion, treasured as one of Disney’s quirkier rides, has long maintained a fan-favorite status for its distinct balance of the spooky and the sprightly. Varying iterations of the attraction, including the Dutch Gothic-style Tudor version at Walt Disney World, in Orlando, Fla., have become staples at five Disney resorts around the world.

Other rides over the years have come and gone (and been given face-lifts to reflect recent Disney films). But with remarkably little deviation from the original design, the Mansion has been a constant for five decades.

Mysterious From the Start

Built in the early 1960s to resemble an old New Orleans estate, the Haunted Mansion at Disneyland sat vacant for years — its exterior finished, its insides a mystery. The longer it sat, the more the mystique built. An advertisement at the gate for “post-lifetime leases” hinted at the type of ride future visitors might expect: Inquiring spirits were directed to contact Disneyland’s “Ghost Relations” department.

There were rumors among visitors about what had rendered the house off-limits for park guests. Maybe Disney had already tried to open it as an attraction, but the ride had been too terrifying. Perhaps Walt Disney himself was planning to move in, and the house would never open as an attraction.

In the end, the delays boiled down to something more mundane: Between creating other future favorite rides like Pirates of the Caribbean, breaking ground on a new park in Orlando and getting ready for the 1964-65 World’s Fair, Disney’s Imagineers were simply swamped. After Disney died in 1966, finishing the Mansion became a focus.

A creative debate between the project’s two driving Imagineers, Marc Davis and Claude Coats, inspired the Mansion’s complementary moods. Davis was in favor of a lighter, humorous approach to a haunted house. Coats wanted the opposite.

“The beginning of the attraction is more Claude Coats,” his son Alan Coats said. “It’s scarier, it’s more moody, it’s darker, it’s ominous. You think, ‘Uh oh, this is going to be scary,’ and it does really frighten a lot of people when you enter those doors.”

But as the ride’s vehicles, called “doom buggies,” whisk visitors along, the mood starts to brighten — Davis’s influence. Spirits dance through the ballroom, and the journey culminates in an upbeat graveyard party. For many fans, it’s that combination of fun and frightful that has made the ride a favorite.

“I think the Mansion taps into our wanting to be scared and realizing that we made it through safely, that we were able to overcome our fears and deal with them and come out O.K.,” Mr. Coats said.

Susan Thompson, who lives in Lakeland, Fla., spent her first ride through Disney World’s Mansion in Orlando, as a 5-year-old, crying with her head buried in her mother’s side. When she went back a year later, determined to keep her eyes open, she fell in love with watching the Mansion come alive.

Ms. Thompson, now 51, has since acquired her fair share of Haunted Mansion souvenirs: a dress reminiscent of those worn by Mansion staff and a backpack patterned with the manor’s signature wallpaper, among other items. On her twice-a-month visits to Disney World, she always returns to the ride.

For R.J. Crowther Jr., a bookseller in San Diego, the Mansion is the first attraction he has a vivid memory of riding at Disneyland. He’s since been on it more than 200 times, earning him a certificate from Disney staff that declares him an honorary citizen of the park. Mr. Crowther has also collected an “embarrassing amount” of Mansion merchandise, primarily sculptures inspired by art within the ride.

Alyssa Ottum, another superfan, is planning a tattoo sleeve composed entirely of Mansion-related images: The exterior of the Disneyland manor is already finished, and pieces with the Mansion’s gothic wallpaper and some of the ride’s most famous characters are in the works.

The Haunted Mansion’s fans extend beyond the ride’s regulars; it’s a favorite among Disney Parks employees, who are called cast members.

“Everybody that says they want to work for Disney?” said Robert Brauchler, who was a cast member for 16 years at Walt Disney World in Orlando. “Ninety-nine percent of the time, they say they want to work at the Haunted Mansion.”

The work itself isn’t extraordinary. Like those at any other attraction, cast members (clad here in green polyester tuxedos and dresses) still spend hours parking strollers in the Florida heat or loading guests into ride vehicles. What sets this attraction apart is how workers, acting as the Mansion’s eerie butlers and maids, can melt into their somber, creepy characters as part of the ride’s ghoulish aesthetic.

“If you’re having a bad day, that’s a great place to be working,” Mr. Brauchler said. “I would just stare at people and just not smile. It’d be like, ‘Hey! You work at Disney; you’re supposed to smile!’ No, I’m not. I would just walk away from them, and it’s all part of the theming.”

Mansion cast members still find time for more upbeat moments: Mr. Brauchler and another employee would sometimes sneak black-and-white photos of themselves into the picture frames in the ride’s ballroom scene. And when employees at the attraction complete their training, they crawl underneath the “doom buggy” tracks — flashlights in tow — to sign their names alongside hundreds of others on a wall beneath the ride.

Some riders, though, have a different way of leaving a mark. Every once in a while, a cast member discovers gray powder on the floor — the ashes of deceased park-goers who had a particular affinity for the ride, spread by loved ones hoping to add another spirit to the Mansion’s collection of happy haunts.

“It was like, ‘Ugh, somebody spread Grandma on the carpet again,’” Mr. Brauchler said. “We’d have to shut the ride down and go investigate it.”

He added: “All these people that think that their loved ones are going to be in the Haunted Mansion forever? Well, Grandma’s getting vacuumed up into a vacuum and getting sent out to the landfill somewhere.”

But there are plenty of other park-approved memorials at the Mansion. Many Imagineers who worked on the attraction were honored in a mock cemetery at Disneyland bordering the ride queue, its gravestones etched with rhyming epitaphs. (The cemetery was removed to make room for longer lines, but a similar one remains in Orlando.)

It was a bit too dark for Coats’s wife, their son Alan said. She was not a fan.

Voices From the Beyond

Another Disney employee was immortalized in the ride itself. Madame Leota, the Mansion’s floating head who summons ghosts from inside her crystal ball, is the face of Leota Toombs, one of Disney’s first female Imagineers.

Her daughter Kim Irvine, Disneyland’s art director, was a teenager when her mother was practicing for the role. Toombs was the face of Madame Leota, but not the voice, and Ms. Irvine remembers her mother lip syncing the incantation in front of a mirror downstairs for days.

“One day my friends and I came home, and she was down there doing, ‘Witches and goblins and ghoulies!’” Ms. Irvine said. “They were like, ‘What’s wrong with your mom?’”

Toombs did, however, lend her voice to the end of the ride at the California park, where a small spirit — lovingly called Little Leota by fans — ominously bids visitors adieu. When Toombs died, in 1991, Ms. Irvine’s visits to the ride with her own daughters gave them a chance to hear their grandmother’s voice again.

“I always had to laugh when we would be going up the exit escalator and seeing Little Leota over there going, ‘Hurry back,’” Ms. Irvine said. “And I’d go, ‘Girls, say hi to Grandma, there’s Grandma!’ and I’d hear people around me go, ‘What a weirdo.’”

When Disney decided to create an annual holiday-themed makeover for the Mansion, Imagineers needed to record a new incantation for Madame Leota in order to match the overlay. When they approached Ms. Irvine for the part, she was initially unsure — but she knew she didn’t want anyone else to do it either.

Now, every winter, she and her mother are both a part of the ride.

“I go out in the park in the morning before guests come in to check things out and look things over, and it’s so quiet out there in New Orleans before they turn on the music,” Ms. Irvine said. “But Little Leota never turns off. So to walk by the exit there and hear her little voice just talking away to me makes me smile.”