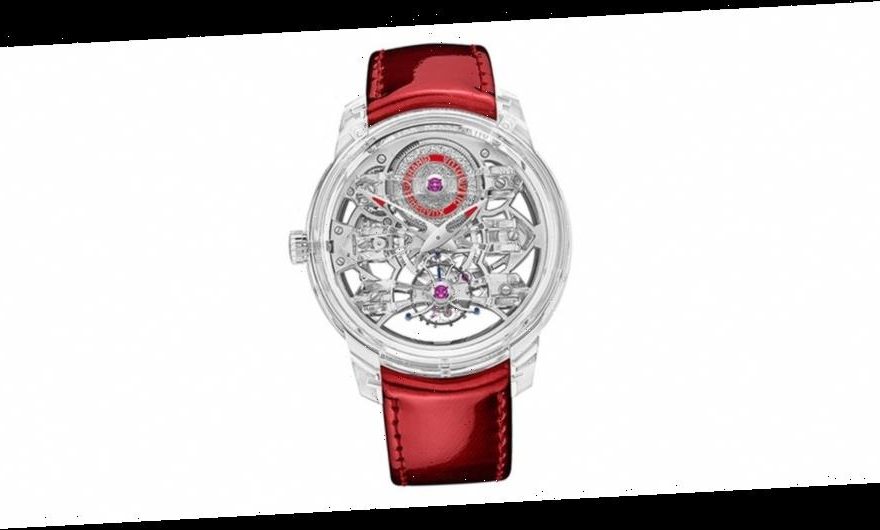 While there’s nothing low-key about a sapphire crystal piece of haute horology, Girard-Perregaux‘s play for the Chinese New Year watch market is the most subtle and tasteful we’ve seen in a while and resists the urge to put an animal on the dial completely.

Not only is the case machined from ultra-hard sapphire crystal (the polishing alone taking some 200 hours) but the crown, lugs and much of the movement too, including three of the brand’s Neo Bridges meaning no aspect of the automatic movement is obscured except for the white gold micro rotor which, in quite an unusual move, is intentionally hidden behind the mainspring barrel to keep the movement looking ‘uncluttered’.

At the six o’clock is a 60-second tourbillon mechanism which doubles as a small seconds and is formed of 79 components weighing just a quarter of a gram in total. And while it’s not often we’d consider mentioning a watch’s presentation box, we’ll gladly make an exception for that of the Quasar Infrared, a floating glass sphere, hand-blown in Switzerland.

The Quasar Infrared, the latest in a series of transparent sapphire crystal watches from the brand that has already included the Quasar Light and Quasar Azure, this time uses red accents on its hands and mainspring barrel, as well as two bright red straps, in calfskin and alligator, to offer reference points in what is a mainly transparent watch.

The red hue is no accident either, reflecting the color most closely associated with Chinese New Year which evokes vitality, prosperity and a sense of optimism for the year ahead.

You’ll have to be quick if you want all of this symbolism on your wrist though, just single piece is being made, priced at $319,000 USD, and is available from Girard-Perregaux’s Hong Kong boutique at K11 Musea.