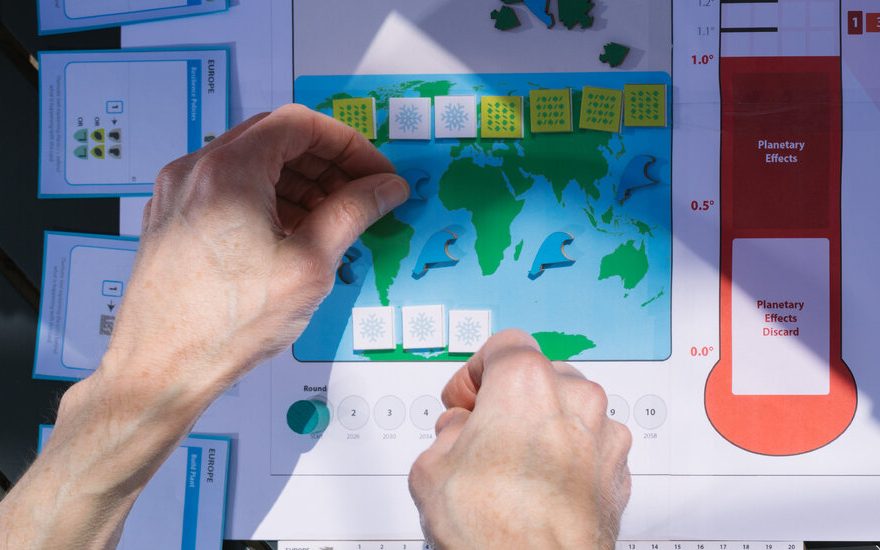 The Earth’s average temperature unexpectedly leapt 0.4 degrees Celsius on Saturday afternoon, putting the planet on the brink of catastrophe. Within hours, millions of people would be displaced, crops would fail and sea levels would rise.

Until, that is, Matt Leacock realized that the four people playing Climate Crisis, a board game he is developing, had gotten the rules wrong.

“No, divide it by four!” he told the players, who were testing the game. They had been counting a pile of brown cubes, representing greenhouse gas emissions, to calculate how much the world’s temperature would increase. They’d just forgotten to divide the figure by the number of players.

The players — all experts from the Red Cross Red Crescent Climate Center, playing online and linked up via a video call — looked relieved. But it wasn’t all good news. “There might be some forest fires in China, and Europe and the United States soon,” Leacock said.

Leacock, 49, is one of the biggest names in board games. In 2008, he brought out Pandemic, a game in which players cooperate to stop outbreaks of fictitious viruses worldwide, while also developing long-term cures. That game has sold over two million copies, and over the past year, interest and sales have surged — for obvious reasons. 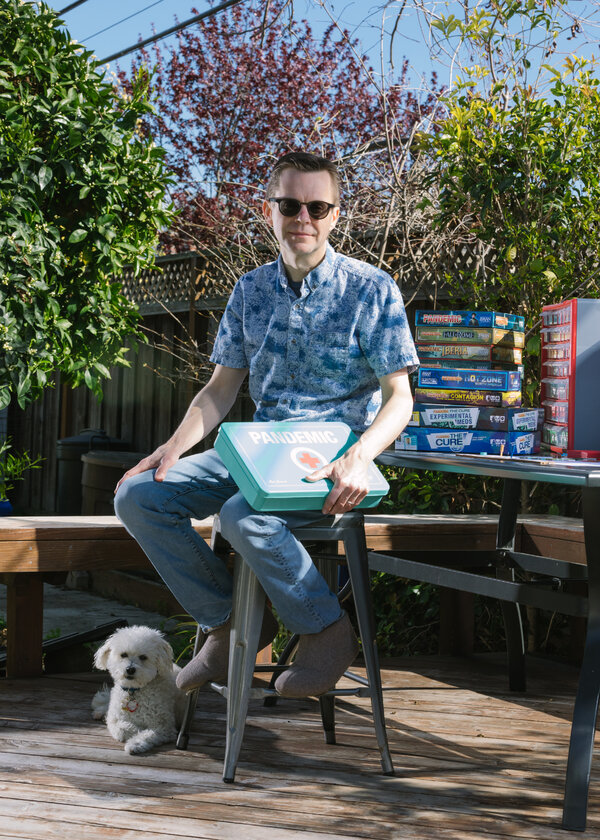 If the idea of making a fun game about surging diseases sounds like a tall order, Leacock said making entertainment out of climate change was even tougher. “I haven’t ever tried to create a game that was faithful to science before,” he said in a telephone interview from Sunnyvale, Calif., where he lives.

Pandemic was about creating a sense of tension, he said, but Climate Crisis has “higher ambitions.” In addition to being entertaining, he hopes the new game can change people’s actions in the real world.

“I’ve got a big opportunity to come up with a cooperative game that makes a difference,” he said. “I don’t want to blow it.”

Three other board game designers said in telephone interviews that Climate Crisis sounded like a tough project. “Most people think of games as a thing they do as an escape from everyday life,” said Elizabeth Hargrave, the creator of Wingspan, in which players compete to attract birds to nature reserves. “It’s hard to wrap my head around how to make a game about a real life — very dire — situation fun,” she added.

Leacock first considered making a game about climate change in August 2019 after a British academic sent him an email suggesting that he tweak Pandemic to make it about that theme. Leacock dismissed the notion, he said, “but then another person reached out with that idea, then another person.”

Last March, he decided to give it a go. So as much of the world went into lockdown and looked for escapist entertainment, he began reading extensively on climate change.

“I immediately fell into a big trough of despair,” Leacock said. “Climate crisis books are a rough bunch, in that they all start with laying out the crisis, trying to make you realize the gravity of the situation.”

He dragged himself out of that hole, he said, only after he began collaborating with Matteo Menapace, an Italian game designer in London. Together, they investigated proposed solutions to the crisis, reading up on things like clean energy rollouts and geoengineering projects that remove carbon dioxide from the atmosphere.

Leacock realized that it wasn’t just a story of doom and gloom.

“That was really important, as in order to create any game, you need to figure out how players can win,” he said. “Once we had a beat on that, we started making progress.”

As it stands, Climate Crisis (which is still in development) involves four players taking on the roles of the United States, Europe, China and the Global South, with the collective goal of lowering greenhouse gas emissions so that the Earth’s temperature stops increasing.

The game proceeds in rounds, representing four-year periods, from the present day to 2050. In each round, players lay down cards representing emissions-cutting policies, such as building solar power plants or increasing food waste recycling. Their carbon totals are represented by brown cubes that get piled up in the middle of the board, and red counters move along a cartoon thermometer as the Earth’s temperature goes up.

Leacock said he was trying to make the game scientifically accurate by seeking feedback from experts, such as the four Climate Center employees who played on Saturday. “I don’t want to be the climate dude who comes in and says, ‘Hey, I know the answer,’” he said.

But accuracy adds complexity. Leacock has to ensure that the game didn’t become overly detailed if he wants it to be popular, said Vital Lacerda, another game designer.

Lacerda made his own climate change game, called CO2, and its rule book stretched to 26 pages, he said. (The game’s audience was small, he added.)

Leacock said he had realized that pitfall. Climate Crisis has already gone through over 70 versions, and there are still months of work ahead. He spent three years on Pandemic while working full-time as a user experience designer at Yahoo.

Menapace, Leacock’s collaborator, said the biggest issue they were now grappling with was how to create a sense of pace and suspense. During one recent test run, the players thought they were doing well for three rounds, but then the temperature shot up and the game came to an abrupt end.

“We almost simulated the idea the planet’s sleepwalking into disaster,” Menapace said, “which might be a good representation of how things are in the world, but it’s not great from a gameplay perspective.”

At Saturday’s test run, a lack of excitement did not seem to be a problem. After a few rounds, the players from the Climate Center all piled their blocks into the middle of the board and worked out what that meant for the climate. World temperatures jumped 0.2 degrees Celsius in an instant.

As the temperature climbed, a counter landed on a space representing a melting ice sheet: The Earth was now reflecting less sunlight, and the temperature increased a little further. In the fallout from that, the players now faced a refugee crisis.

Erin Coughlan de Perez, who was playing the United States, said the tumbling crises were “an excellent way of showing the feedback loops involved in climate change.”

Yet her smile as the disaster unfurled was a sign of something else: She was enjoying the game.