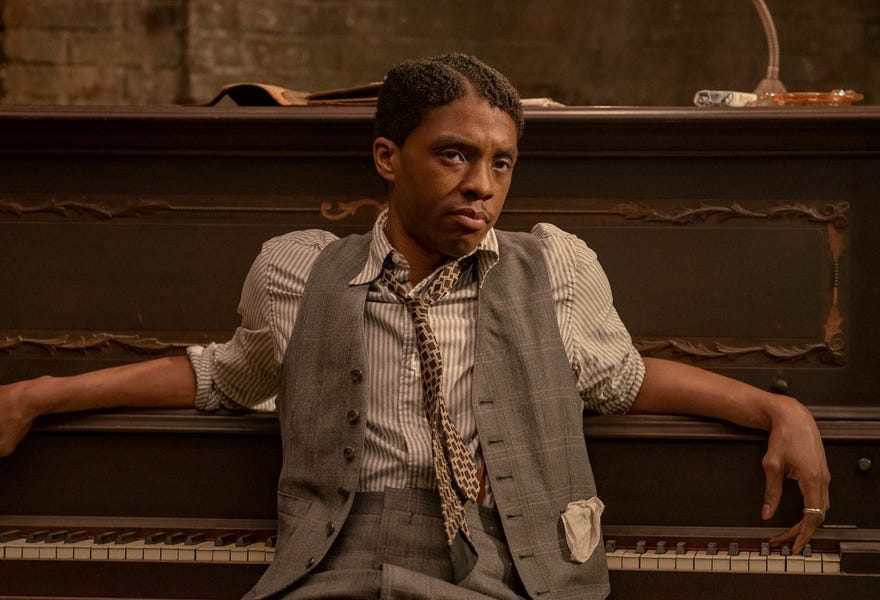 When you buy through our links, we may earn money from our affiliate partners. Learn more.

Chadwick Boseman, the late star of "Black Panther" and "42," delivers his final performance in Netflix's "Ma Rainey's Black Bottom," an adaptation of the play of the same name. The film debuted on the streaming platform on December 18 after a limited theatrical run that drew critical acclaim for Boseman's role as musician Levee Green.

"Ma Rainey's Black Bottom" is a part of the 10-play Pittsburgh Cycle written by August Wilson; it was first performed in 1984. In the Netflix adaptation, Viola Davis plays Ma Rainey, a real blues singer who inspired Wilson's character. Davis won an Academy Award for her role in another Wilson adaptation, "Fences," in 2016. Denzel Washington co-starred, directed, and produced "Fences," and is credited as a producer for "Ma Rainey's Black Bottom."

Boseman filmed "Ma Rainey's Black Bottom" in July 2019, one year before he died of colon cancer. His role has been described as "a parting gift" by critics, and members of the cast described Boseman's performance as both "extraordinary" and "terrifying." Davis, whose character clashes with Boseman's Green on stage, said she broke down when she heard news of Boseman's death in August.

Along with the film, Netflix has produced a 30-minute documentary exploring how Wilson's play was adapted to the screen, with interviews from Davis, Washington, and director George C. Wolfe.

Outside of a very limited theater run, "Ma Rainey's Black Bottom" is exclusive to Netflix, so you'll have to sign up for the streaming service to watch.

Netflix is also home to "Da 5 Bloods," Boseman's penultimate performance, directed by Spike Lee. In that film, Boseman plays a member of a Black US Army troop in Vietnam, alongside Jonathan Majors and Delroy Lindo.

What other movies and shows can I watch on Netflix?

Netflix members can access a huge library of original shows and movies, as well as full seasons of select network series and a catalog of older films from different studios.

Popular Netflix Originals include shows like "Stranger Things," "The Witcher," "Ozark", "The Umbrella Academy," "The Crown," and "Cobra Kai." The service is also home to exclusive movies like "Enola Holmes," "The Devil All the Time," and "Rebecca."

If you're interested in sampling some of Netflix's original content but you don't want to sign up for a subscription just yet, you can watch some movies and shows for free right now. The free selection features 10 titles, including the movie "Bird Box" starring Sandra Bullock, and the first episode of "Stranger Things."

You can purchase syndication rights to this story here.

Disclosure: This post is brought to you by the Insider Reviews team. We highlight products and services you might find interesting. If you buy them, we get a small share of the revenue from the sale from our commerce partners. We frequently receive products free of charge from manufacturers to test. This does not drive our decision as to whether or not a product is featured or recommended. We operate independently from our advertising sales team. We welcome your feedback. Email us at [email protected]