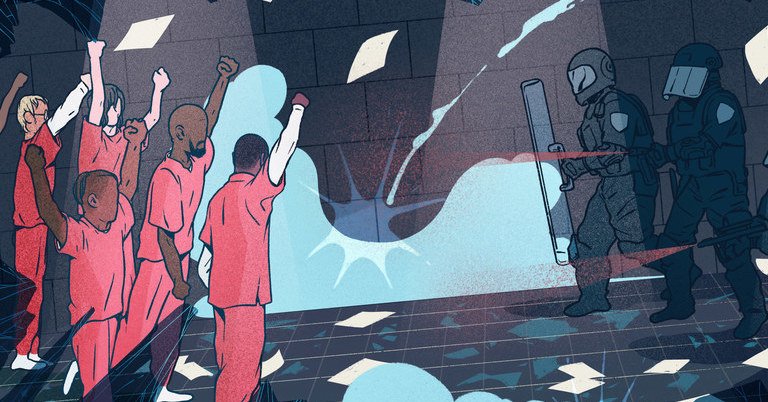 This article was published in collaboration with The Marshall Project, a nonprofit newsroom covering the US criminal justice system.

A prisoner strike had been organized to take place on the morning of September 10, 2016. It was to be a peaceful demonstration of solidarity, a statement of opposition to the oppression and the egregious conditions we endure day and night at the Kinross Correctional Facility in Michigan.

Here, black mold creeps out from the institutional-white, rust-proof paint intended to contain it. It loiters around the bases of toilets, seeps from under floor tiles and scales the walls of showers. Eight men pack cubicles designed for six. The food tastes indigestible; some staff are verbally abusive.

These and a long list of other grievances made the prison we call “Hiawatha” a ripe atmosphere for resistance.

There had already been several demonstrations of unity amongst the incarcerated population. For instance, most of us prisoners would line up together in the cellblock for 20 minutes when “yard time” was called, in complete silence, then simultaneously disperse when we decided we felt like going about our usual routines. This was done three times, but the administration just brushed it off.

When the 10th of September arrived, staff were clearly expecting us not to show up to our work details, ready to report our non-compliance to their bosses. It was obvious that one of their inmate-pets had informed them of the strike.

Breakfast came and instead of hot meals, the staff handed out brown paper bags containing a cold cheese sandwich, milk and six duplex cookies. Clearly their way of showing displeasure in our solidarity.

Shortly after returning from chow, I noticed out my cell window a small assemblage of men on the common yard. Within minutes, their numbers started to multiply. When they began to march around the perimeter, I naturally felt compelled to hop off my bunk and join them.

Out the doors I went. I stood with the crowd, applauding as more and more men arrived. The throng grew fast, and in an hour, hundreds of Hiawatha’s population were out on the yard, chanting in unison, “No justice, no peace!”

The Kinross facility had officially lost its treasured “control.”

A list of demands, including better food and higher wages, was served on the warden, who had come outside to watch, and a few prisoners vehemently negotiated the terms with him.

The prison’s authority had been curbed for several hours now. Through the crowd, though, confused whispers could be heard from men wondering what our end-game was. How long were we going to protest? Guys were tiring and getting edgy.

The warden had gone back inside to consider the terms of our negotiation. When he returned an hour later, he spread word that he was reluctantly considering most of our demands.

Our negotiators shouted, “We won!”

Then we were instructed back into our units to be counted. I was relieved to get back and relax, but my intuition warned me to stay on my toes. I couldn’t escape the question: Were they really going to let us get away with taking control of their facility and making demands?

Count was made, followed by an announcement that chow would be brought to the units. When those same detestable sack meals arrived, I sprang to my feet and frantically began packing my property, hoping to keep it safe in the chaos to come. I told my cubies, “Something is about to go down!” I knew the bag meals meant the prison wasn’t really ceding to us.

And just as I was saying it, we heard over the officers’ radios the coded instruction, “1019! 1019!” The staff reacted like track runners anticipating a starter pistol.

At once, they all abandoned their posts and made a dash for the control center in the administration building. They even had ATV’s suddenly parked and available to rescue the staff who couldn’t retreat fast enough. It was comical to watch, but the situation was extremely serious.

Within minutes, we were alone without any supervision. Panic ensued as everyone braced for the inevitable attack. Five minutes after the distress code was given, the ERT stormed the compound. They formed groups of about 30 and marched toward each unit in single-line formation.

Anyone attempting to exit got riddled with chemical rounds from their anxious rifles. I continued packing as the spray consumed the air. Guys started arming themselves with any material that would cut, stab or be used as a bludgeon.

The ERT had us divided and trapped, savoring the revenge in their grasp.

Some younger prisoners with appetites for destruction had been rebelling, looting and demolishing as much as humanly possible—their own cells, the bathrooms, public areas, staff offices, everything. Once the surveillance cameras were painted out or papered over, many hold-outs gladly joined in the destruction. My senses were overwhelmed. The smells of gas, paint, smoke and burnt wires mingled to create noxious fumes. Then there was the relentless din: yelling, glass shattering, sinks and urinals being smashed to bits, music blaring, the fire alarm wailing, and steel being rubbed against the concrete as men forged crude weapons.

Grasping the degree of chaos around me, I couldn’t recognize the place anymore. Everything that was not bolted down was in ruins. Broken glass shimmered on the ground like precious jewels. Prisoners’ files from the counselor’s office were strewn about the floor. The washing machine and dryer had been relocated through the front window and onto the yard.

The ERT entered one unit at a time, targeting specific prisoners for immediate “ride-outs,” where they would be sent to other prisons. Starting with A-Unit, they worked their way back to H-Unit, where I was housed. It was 11:00 p.m. when an angry man’s voice barked through a bullhorn, “Get inside your assigned cubes and on your bunks!”

This demand was instantly followed by two flash bangs that caused those intending to resist to run for the safety of their cubes. Red beams penetrated the smoke, searching for marks.

When the ERT reached the cubicles, they instructed each man to touch the sky and walk backwards down the hallway out the back door where a group of officers were waiting to cuff and identify us. Men were seated on the ground and others were being dragged away.

When I informed the officer of my name, she yelled, “This one’s riding!” Two officers promptly snatched my arms and dragged me to the chow hall, now converted into a kind of processing center.

There, a stubby officer wearing a sadistic-looking facial expression and holding a Taser looked me in the eye and yelled, “Strip!” No privacy existed in this open space, and male and female staff were everywhere. In no mood to be tased, I complied. Standing there naked as he meticulously searched my clothing, I considered my ancestors on an American auction block.

After my personal effects were thrown in a junk pile, and Taser Man was satisfied that I had no contraband up my ass, I was ordered to dress, got chained, and lined up with other prisoners waiting on the next bus out.

The restraints served as more razor wire binding me, cutting deep into my ankles and wrist, and I knew it would be a long, miserable ride ahead. I was sent to a maximum-security facility after participating in the “disturbance,” and left there until they decided to relocate me again.

Mangaaka Ade, also known as Calvin Westerfield, 41, is incarcerated at Central Michigan Correctional Facility, in St. Louis, Michigan, where he is serving a 20-to-60-year sentence for second-degree murder.

Details in this essay were corroborated with an official report obtained through a state Freedom of Information Act request and other eyewitness accounts. The Marshall Project also sought and received comment from a Michigan Department of Corrections spokesperson.