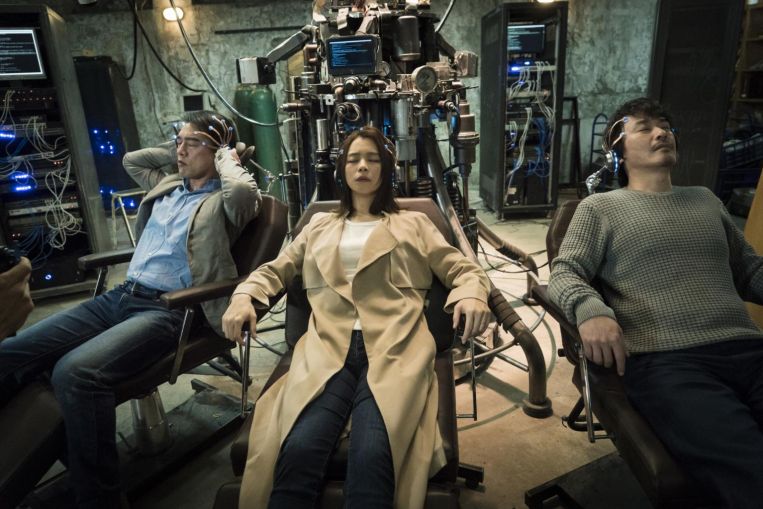 SINGAPORE – Filming the science-fiction Taiwanese drama Dream Raider was no easy feat for stars Weber Yang and Ellen Wu. In the HBO Asia original Yang, 39, had a scene where he suavely rescues Wu by carrying her on his shoulders while fighting enemies.

But reality was much less heroic. The 26-year-old actress says in a video interview with regional media: “He bumped me on my head while we were going through a door and I had to ice it for the swelling to come down.”

An apologetic Yang says he actually bumped her head thrice on the same spot in the flurry of filming.

He adds with a laugh: “I’ve never done something so heroic in real life. At least Ellen is very light and it’s easy to carry her while fighting.”

The two stars play co-workers turned lovers in the series – which is premised on the idea of a new technology that allows people to enter others’ dreamscapes. Yang plays a cop investigating a case of missing girls and works with Wu’s neurology expert character.

He says of the science-fiction element of the story: “It’s actually very easy to get into the mood of the story because a lot of our sets are actually built physically, like the dream raider machine itself.”

Rising actress Wu, who only started acting in 2016, says excitedly: “I’ve never acted in front of a green screen and I had a lot of help professionally. There is a special effects director on set so I know how the effects will look like, when it’ll appear and the rest is up to my imagination. It feels like I’m acting in a Hollywood production.”

As the rookie cast member among veterans like Yang, Taiwanese actress Vivian Hsu, Taiwanese actors Jason Wang and David Wang – she was well taken care of by her castmates.

“Vivian found out that my waist was injured previously so from the moment we met, she started giving me health advice and tips on taking care of my body. She even made an appointment for me to do a health check-up and took care of everything,” she says.

And Yang made sure she felt comfortable in the intimate scenes between them.

“I told her not to worry before our kiss scene because I brushed my teeth,” he says.

Wu adds that a light rain was falling the day they filmed the scene and the atmosphere was “very romantic”.

The onscreen relationship between another set of cast-mates – Wu Ke-hsi and Jason Wang – is much more sinister.

This is a rare venture into television for Wu, who is well-known as a film actress in Golden Horse-nominated movies like The Road To Mandalay (2016), The Bold, The Corrupt And The Beautiful (2017) and Nina Wu (2019).

But she was convinced by the project once she read the script.

The 37-year-old actress says: “Every episode felt like a mini movie with its own concept. And I was very drawn to the idea of doing action scenes because I’ve hardly done them. But actually, before acting, I was a hip-hop dancer so I’ve had some training in terms of my body and I wanted to try fight scenes.”

Her action scenes in the series were done primarily with a katana – a Japanese sword – in a kimono as her mysterious antagonist takes on the fighting style of a Japanese samurai. Wu says she spent around two months practising with the katana.

During filming, she was worried that she would draw blood from Wang, 52 – who had to exchange blows with her in the series.

“The katana is quite sharp so it’s actually very dangerous,” she says.

Wang, who plays Ellen Wu’s father and a genius scientist in the drama, quips: “Thank god you have good aim then.”

While it is not possible to enter the dreams of others in real life, if they could – whose dream would they visit?

Wu Ke-hsi has perhaps the most relatable answer.