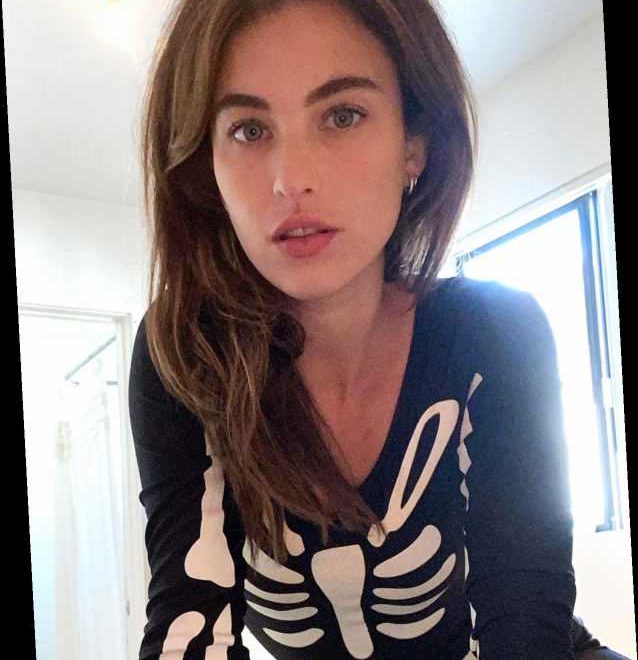 The actor promises the miniseries is more "about relationships and human connection with the backdrop of coronavirus."

When celebrities (virtually) hang out with Bustle writers, we want to give them the chance to leave their mark. Literally. So we hand them a pen, a piece of paper, a few questions, and ask them to get creative. This time Love in the Time of Corona star Rainey Qualley is leaving her mark in the Bustle Booth.

In late April, musician and actor Rainey Qualley made headlines after she was caught shuffling under a locked gate at the Audubon Center in Debs Park in Los Angeles. The park was closed due to the quarantine, but Qualley, her sister Margaret Qualley, and her mother Andie MacDowell sneaked in for a hike and got caught by paparazzi while heading out. "My mom was so mad at me," Qualley tells Bustle with a laugh. While MacDowell — who the photographers snapped ushering the family’s small dog beneath the gate — bore the brunt of the media criticism, Qualley reveals she was the instigator. "[It was] totally my fault. We shouldn’t have done it. But to be fair, everyone else was doing it too!”

It’s exactly these kinds of complicated, quarantine-induced behaviors that Qualley’s latest series Love in the Time of Corona explores. The Freeform miniseries, out now, follows four intertwining households that are all struggling to adapt to the new normal of the coronavirus pandemic. To comply with social distancing protocols, the show only worked with real couples (like Leslie Odom Jr. and his wife Nicolette Robinson) and "quaranteams" (Qualley moved in with her co-star Tommy Dorfman for the duration of filming). The result is a fascinating time capsule of one of the most unprecedented times in recent history. "I think everyone [is] kind of sick of talking about corona, but it’s not really about that," Qualley says. Her character Elle is a singer navigating the virtual dating scene along with her roommate, Oscar (Dorfman). "It’s about relationships and human connection with the backdrop of coronavirus. It’s about falling in love and family dynamics."

Qualley, who has been feeling creatively inspired by the slowed-down pace of the world, also recorded an original song for the series titled “6ft From Love.” But the track isn’t the only music that she’s been working on these days. Under her artist name Rainsford (her full first name, which she inherited from her great-grandmother), she’ll be releasing "Love Me Like You Hate Me,” the song she’s most proud of to date. The single drops in October, along with a music video featuring her sister Margaret and Shia LaBeouf, directed by Olivia Wilde.

"Writing music is very much therapeutic and self-reflective," she says of the emotional release it’s given her during quarantine. "It’s a representation of whatever I’m going through at the moment."

What was your favorite cartoon as a kid?

Describe reality TV in one word:

Who is your celeb idol?

What is something you would want people to say about you?

Draw 3 emojis that describe what’s ahead on your show:

Anything else you want to add or draw?