Jennifer Lopez and Ben Affleck may have broken up once, but they’re not letting go anytime soon. In a new interview with with Zane Lowe on Apple Music 1, Lopez opened up about her relationship with her now-husband and the trials and tribulations they’ve had to endure during their on-and-off-and-on-again relationship.

“It was a new thing and it destroyed us,” Lopez said of the media attention at the time. “That was part of what destroyed us was the outside energy that was coming at us. And we loved each other. It was hard.”

Lopez continued, saying that neither of them wanted to say “woe is me” given the circumstances. “So we were like, ‘well, we just got to dust it off and keep it moving,’” she said. The two then broke things off before their wedding in 2004.

“I think, in the weirdest way, that it motivated both of us to then become and do the things that we wound up doing, which is going into hyper-gear.” Lopez explained, noting that both of their ambitions (and careers) skyrocketed post-breakup. “He went into hyper-gear and I went into hyper-gear,” she recalled. “But not together. We had to do it separately. He went on to start directing, win his Oscar, do his second Oscar, do his thing where people had written him off in a way. The same thing with me.”

Also in the candid talk, Lopez shared her inspiration behind her newly-announced album “This Is Me…Now,” a somewhat sequel to her 2002 album “This Is Me…Then.” She shared with Lowe, “20 years ago I feel in love with the love of my life and I was working on an album and it was called ‘This Is Me… Then’ and it was all about capturing that moment in time.” 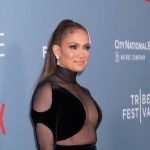 Explaining the process of making the new album, Lopez said she sat down with her team and shared similar sentiments, saying, “the reason that we’re here is because I want to capture this moment in time because it’s even better than the first time.”

Lopez added, “When I’m in love is when I’m inspired.”

In love indeed! It’s easy to see how smitten Lopez truly is during this interview with Lowe, so we can’t hope for the album to come out in 2023!

Before you go, click here to see a complete timeline of Ben Affleck and Jennifer Lopez’s relationship.