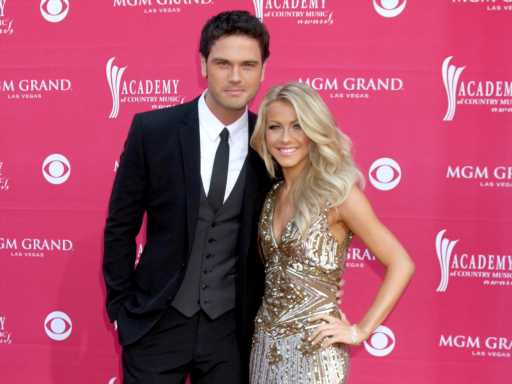 Julianne Hough is currently in the midst of what seems to be an amicable divorce from her husband, Brooks Laich, but she isn’t getting any sympathy or support from her ex-boyfriend Chuck Wicks. The former Dancing With the Stars pro and the country singer dated more than 10 years ago, so the shade he’s throwing at her now is a little strange.

Wicks recalled their time together on his Talk to Chuck podcast with guest Carly Pearce, who is dealing with her own divorce from Michael Ray. He said they had the time of their lives touring with Brad Paisley, back when Hough dabbled in the country music industry. Wicks then jumped into competing on the eighth season of Dancing With the Stars with his girlfriend as his partner — things were going great — until the relationship suddenly took a nosedive.

“We’re both loving life, we’re on a high because both careers are going great. We bought a house together, we did all these things, and then out of nowhere, you find out that they’re not the person that you thought they were,” he told Pearce. “And you break up. And then everybody wants to know why.”

Wicks then went on to say the two made a deal not to reveal the reasons they split, and to just pretend they went their separate ways in 2009. Apparently, more a decade later, the pact doesn’t seem to sit well with the musician and he’s not-so-subtly saying that Hough was to blame for their breakup.

He’s not going to throw anybody under the bus by throwing Hough under the bus? It’s okay to have mixed feelings about an ex, of course, but if he had an agreement with Hough, he should honor it. But as Wicks elaborated, “Now, I just don’t even care… It’s on you. You get past it.”

In reaction to Wicks’ story, his co-host Sami Shea said, “Sometimes the trash takes itself out.”

Before you go, click here to see all the celebrity breakups in 2020.