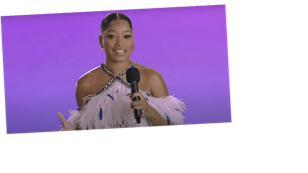 We knew Keke Palmer was going to give us something amazing to open up the 2020 MTV VMAs, but damn, if she didn’t inspire us. Not only did the Hustlers actress bring the funny and the looks, but she also delivered a powerful, heartfelt message. She opened the show with a tribute to the late and great Chadwick Boseman, who died at age 43 on Aug. 28 after a four-year battle with colon cancer. “We need to take the time to talk about the devastating loss of Chadwick Boseman, an actor whose talent and passion is a true inspiration to all the fans he touched and everyone he encountered,” she said. “We dedicate tonight’s show to the man whose spirit touched so many. He is a true hero, not just on screen but in everything he did. His impact lives forever.”

Palmer later emphasized the importance of unity and continued action amid the fight for social justice and equality. “We need to come together, and music — music has that power,” she said. “Music can help us heal. It’s all love, and that’s what tonight is about. We are making the impossible possible, pushing the boundaries of music performances because that’s what we do on the VMAs.”

If Palmer’s introduction is a glimpse at her hosting style for the rest of the night, we are some very lucky viewers. Is there an award for the best host? We’re nominating and declaring her winner in the same breath! We know she stays booked and busy, but just a suggestion for future award shows: hire her! We would gladly watch her throughout this entire award season — honestly, it would be a gift. Watch Palmer’s moving opening above and marvel at the sheer talent dripping from every second.