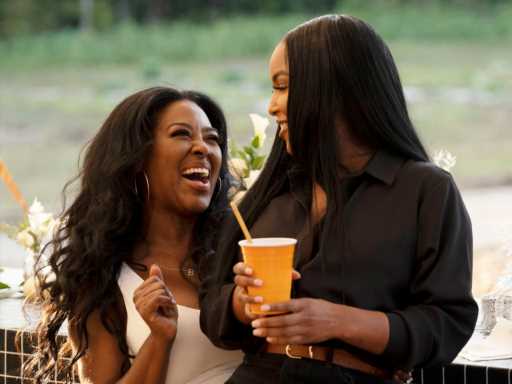 Sunday’s episode of Real Housewives of Atlanta showed a Halloween party at friend Falynn Guobadia’s house attended by cast members Porsha Williams, Drew Sidora, Kandi Burruss, LaToya Ali, Cynthia Bailey, and Kenya Moore. It was a surreal scene for a few reasons: the sparse attendance, the even sparser snacks, Cynthia’s “hand sanitizer” costume reminding us just how long some celebs have been living in a post-COVID world. But LaToya, in rare form, came the closest to directly addressing the most unsettling aspect of the scene: the giant Native American headdress Kenya had on in service of a “warrior princess” costume finished off with face paint. In the midst of what Kenya would like to be a relationship-defining conversation, LaToya bursts out laughing: “I can’t take you seriously with this,” she says, waving at all of it. 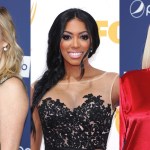 By laughing at how ridiculous Kenya looks, LaToya is acknowledging the truth of the moment more than anyone else at that party — and that includes everyone involved in filming. In 2021, Bravo telling a Real Housewives cast member in a headdress “looks great to me, let’s roll” with no intention of addressing the long and problematic history of people doing just that in the episode is ridiculous. LaToya was right to laugh, if only so someone could acknowledge the elephant that others only addressed in confessionals filmed with producers long after the fact.

Since this episode aired, we’ve seen those confessionals and then some. Drew, LaToya, and Porsha all slammed Kenya for the embarrassing display of cultural appropriation, though Porsha unfortunately invoked the adjective “lame,” a term with ableist origins we also hope to leave behind. Kandi, on the RHOA After Show, expressed neutral feelings, saying: “I don’t think she was wearing the costume to mock anyone. I think she thought it was a beautiful costume…And I don’t think she was doing it as a joke to be mean or anything like that.”

Kenya tweeted out her own statement as well, walking back on an earlier defense that the costume was “part of my heritage.” She wrote: “I want to sincerely apologize for inappropriately wearing the Native American headdress as a costume.  I now realize that this was both disrespectful and insensitive and would never have done it if I had that knowledge and understanding beforehand.  I regret it.  When you know better, you do better. I am genuinely sorry.”

Part of the deal of Real Housewives is that you will watch these women mess up, apologize, and try to improve themselves in real time — and there’s value in those stories, as the franchise’s enormous success proves. But as many of the cast members pointed out during filming their confessionals, didn’t we learn this already? Didn’t we — meaning, 99% of the people in the room while filming, know this already? And if so, why did it make its way all the way to our screens without someone deciding to change or otherwise contextualize the offensive imagery?

Native-led nonprofit IllumiNative gave SheKnows the following statement on RHOA‘s choice to edit and air the episode as they did: “We are deeply disturbed by the recent episode of Real Housewives of Atlanta, in which Kenya Moore wore a Native American ‘warrior princess’ costume. Costumes that mock Native peoples, defame our traditions and cultures, and perpetuate negative stereotypes are racist. ‘Playing Indian’ is a form of mascotry that is not just offensive, it is part of a long history of how Native peoples have been dehumanized.

“We are also incredibly concerned that none of the producers or executives at Bravo, Comcast, or NBC Universal intervened, although several cast members commented on how uncomfortable, unnecessary, and offensive the costume was on camera,” the statement continued. “The series has had several instances of racism and offensive behavior and yet it seems no training, procedures, or standards have been sent to stop offensive acts, which go against the values Comcast professes to have.”

With the new Real Housewives of New York season trailer out yesterday featuring first Black cast member Eboni K. Williams giving Ramona Singer a talking-to about referring to “the help,” the time has never been better for Bravo to address its racism problem. The Bachelor has shown us the danger of rushing to diversify cast without improving the culture or taking the time to unlearn racist bias behind the scenes, and we don’t want to see new Real Housewives cast members thrown into environments designed to work against them. How the RHOA Halloween party played out was a warning sign that Bravo may not be where it needs to be.

“Bravo aims to have the highest standards of respect and inclusivity and we recognize that the recent episode of The Real Housewives of Atlanta, in which a cast member wears a Native American costume, did not uphold those values,” a Bravo spokesperson told SheKnows. “We had hoped it would provide a teachable moment, however in retrospect it is clear that the network did not address this properly given the gravity of the situation. We apologize to both the Native American community and our audience as a whole.”

Bravo has not commented on how they might try to repair the harm caused by this imagery, and their choice to air it as they did. And while it’s impossible to blame Kenya’s fellow cast members for their failure to confront her under these oddest of conditions, particularly without knowing any of the details of how filming that party was set up, it was ultimately deeply disheartening to watch Kenya wear such a blatantly disrespectful costume without being swiftly and matter of factly called out for it, or facing any backlash for it whatsoever. LaToya laughing, while hardly even a rebuke, still comes the closest to acknowledging how absurd it felt to watch everyone else ignore it.

Before you go, click here to see the best reality TV shows on right now.