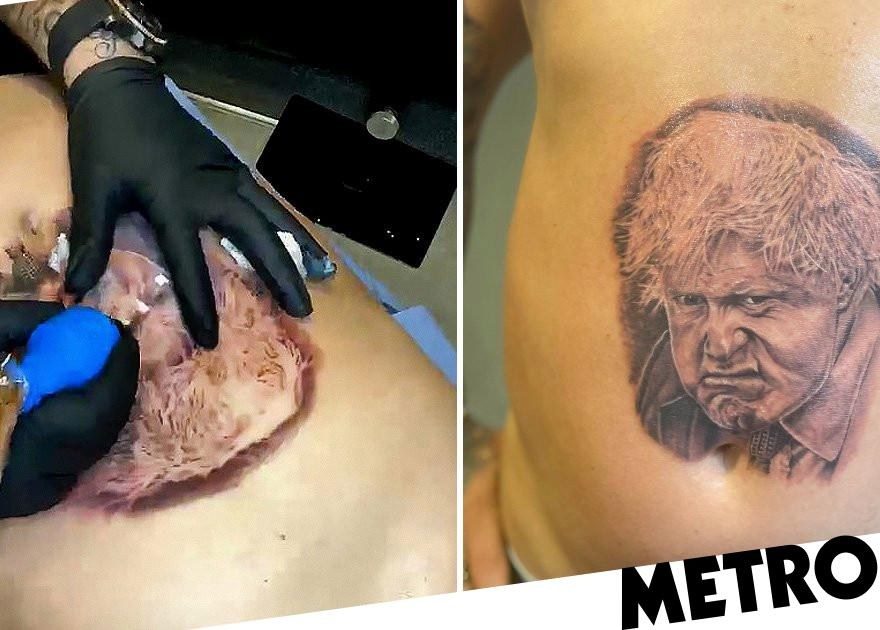 A man got a huge picture of Boris Johnson tattooed on his stomach and said he has no regrets about it.

Kenny Wilding, 42, used the bizarre tattoo to fund-raise money for a family friend with stage-four rectal cancer to be sent to the US for a clinical trial showing promising results.

Megan Smith’s family are hoping to raise £150,000 to help the 25-year-old who was diagnosed with the life-threatening disease in January 2019.

Mr Wilding, from Kidderminster Worcestershire, said he wanted to ‘do something to help’ Ms Smith in her ‘last chance of survival’ and thought a tattoo of Boris Johnson would ‘raise a lot of money’.

He said: ‘I think Bozza is a legend and have never seen anyone with a tattoo of him.

‘It hurt – you could say I nearly wet myself. At first I thought I might regret my tattoo of Bozza, but everyone loves it.

‘I will never regret doing it as it was for a special young lady.’

The tattoo, which took two hours to complete, shows the Prime Minister grimacing on the construction worker’s midriff with his chin resting just above the belly button.

He got the the prime minister inked on his stomach last November after first getting a tattoo that said ‘Meg’s Army’ on his arm, as a tribute to Megan Smith’s fight.

The tattoo, which would ordinarily cost £200, was donated by a friend helping to raise £800 for Ms Smith’s cause.

Ms Smith also has a rare type of aggressive mutation that only occurs in 8% of rectal cancer patients and makes the cancer spread faster – KRASG12V.

She has been referred to the Keck Medical Centre in Los Angeles, California, to receive treatment if the family can raise enough funds.

Megan’s sister, Terri Smith, 34, said: ‘When Kenny first told us that he was having a Boris Johnson tattoo done to raise money for Megan’s treatment we all laughed but thought it was a brilliant idea.

‘It’s so relevant with everything going on at the moment and definitely something Kenny would do as he’s very humorous and loves nothing more than to make people laugh – even more so during difficult times.

‘The support that everyone has shown so far has been so overwhelming but absolutely amazing.

‘My sister needs all the help and support she can get to help fight this awful disease and me and my family are so grateful for everything everyone’s done.’