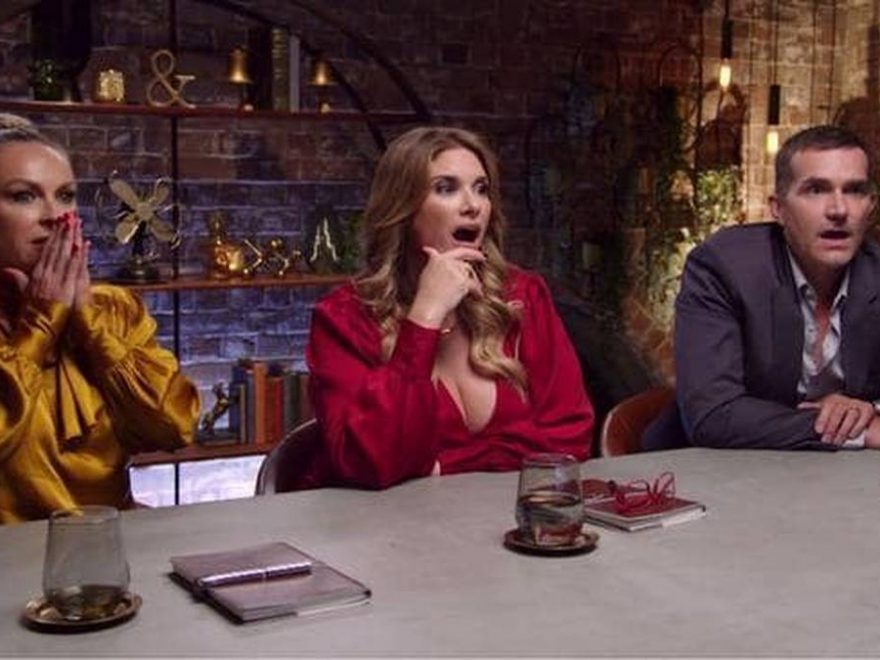 The Married At First Sight reunion dinner party exploded like the radioactive swamp it is and every contestant’s last shred of dignity vanishes, like a ghost: G-O-H-T.

Can you believe the contestants and producers have been holding out all season with bland episodes, only to deliver this spectacular piece of television at the eleventh hour?

And then, after Sunday’s finale, nothing! We already feel ghosted: G-O-H-T (this gag appears every few paragraphs — I regret nothing).

Tonight got real heinous, real quick, so it’s important we ease ourselves into it. Maybe do some deep breathing exercises. Clear the mind.

Oh, hey Coco! We haven’t seen you in a while. What’s that? You wanna begin the night with some inspiring words? Sure, go ahead.

Ahem. Um. OK. Well, this is awkward. Is there something more appropriate we can cut to? Oh, great. OK. Here’s gratuitous slow-mo footage of The Sasshole walking down a staircase as a fan blows open the thigh-high slit of her satin dress, almost revealing her sassho-

She’s not the only one showing off some skin. We practically see Johnny’s sasshole, too.

Liam literally shoves her out of the way without a word before graciously greeting every other girl who isn’t his ex.

Then the experts act like this snub is the worst behaviour that’s ever happened on this show. GENTLE REMINDER: A guy scrubbed the toilet with his wife’s toothbrush.

At last night’s final commitment ceremony, Bec and Jake decided to stay together and we laughed in their faces. How are they faring?

“I packed my stuff up and went to Perth and tried to spend as much time with Bec as I could and, unfortunately, it wasn’t reciprocated. I was there for 20 days and I spent two-and-a-half days with her,” she shares.

We ask the producers if they can change up the tone — get away from the drama and maybe give us a success story.

“We actually moved in together! I moved to Melbourne,” Jake offers a smug grin. “There was nothing keeping me in Canberra. I don’t think anyone in the history of the experiment would’ve stayed together like we have!”

We’d offer thoughts and feelings on this but we’re distracted because The Sasshole suddenly enters the party and almost accidentally lets more than just her sasshole slip.

We’ll let Mel Schilling’s face do that talking on this one:

“That’s … quite a split,” Schilling says.

It’s the most accurate thing any of these experts have said all season.

Here’s where things get tedious. Alana starts telling the girls that Jason broke up with her by a text and they’re all outraged. Alana, Berger broke up with Carrie on a goddamn POST-IT. A text message is nothing. What do you want? A handwritten scroll? Get a grip.

Then Cam enters and we totally forgot he even existed. Who is he again? Ohhh. That’s right. he mildly cheated on his ex-wife Samantha when he had that sorta-affair with Coco.

Coco’s ex-husband Samuel is high on the fumes of the Clairol Home Kit treatment he applied before coming here this evening, and he cuts sick.

“Oi! Big dog! Eatin’, are ya? Getting the protein in ya, big dog? Top dog!” he berates Cam at the other end of the table. “Big alpha male of the room! Bad mouthin’ me behind my back!”

Cam clangs his fork down and politely offers to also bad mouth Sam to his face. “You’re a flog! You’re a flog — you’ve been a flog, you are a flog I’ll call you a flog.”

Ugh, Aaron Sorkin should feel humiliated that he’s never had the skill to craft dialogue like that.

All of a sudden, Cam’s ex-wife Samantha joins in and starts yelling at her ex-husband about how he ghosted both her and — the woman he cheated on her with — Coco.

Coco shrieks and looks at Samantha like she just called her a flog.

“Hey! I did not get ghosted!” Coco corrects.

One of Samantha’s eyelids starts drooping and she leans across the table for balance. “Mate! You said …” and here’s where she starts slurring, “… You said, ‘I got … G-O-H-T. Ghosted!'”

Let that sit for a second. Maybe even re-read that last quote a few times.

Everyone is trying not to laugh. The just stare in silence at Samantha who’s now swaying on her chair.

C’mon guys. One of you is gonna pick that low-hanging fruit. In five, four, three, two…

To try to shake off the humiliation of her spelling error, Samantha pivots the fight and takes a shot at Coco about the technicalities of how she cheated with Cam.

Coco sighs and offers an apology just to end this mess.

This makes Samantha start screeching again. “I don’t give a f**k about ya ‘pology! You’re the flog!” she waves her limp arm in the air.

Oh, settle down, Samantha. Just ignore Coco — you know, like she’s a goht.

Of course, this wouldn’t be a reunion dinner party if Bleep!’s name didn’t get hurled around. Ugh, Bleep! cannot catch a break. Bleep!’s name is just getting dragged through the mud until the very ending.

Melissa interrupts to drop a bombshell. “For anyone who actually cares — I actually spoke to Bleep!”

Kaboom. Well, well, well. Look who’s decided to get down and dirty in the game we call MAFS. Good on you, Melissa. What’d ya say to that big ol’ bleep?

She refuses to share the details of her phone call. Boo!

Then Booka speaks up and reveals her mate reckons she got a call from Bryce’s ex-colleague who confirmed Bleep!’s existence. To be honest, this tangent is a total snooze. But then Booka gets taken down by a twist.

To everyone’s surprise, Booka’s little piece of gossip lures The Sasshole out of her cave to dole out some last-minute sass. She says Jake and Booka kissed while she was still “married” to him.

Eh… this twist kinda fizzles too. The real twist for us is when the factoid gets dropped about that boring elderly lady Beth filming the kiss on her phone.

Anyway, the kiss story sounds outrageous but everyone dismisses Bec for trying to make it seem more dramatic than it is. It was a New Year’s Eve kiss that happened after she refused to see her husband for the better half of a month even though he had moved across the country to live in her city. Either way, ya both terrible. Case closed.

That’s it. We’re shutting this party down.

One more night of this twisted show and then it’s vanishing like a ghost. Ghost! G-O-H-T.