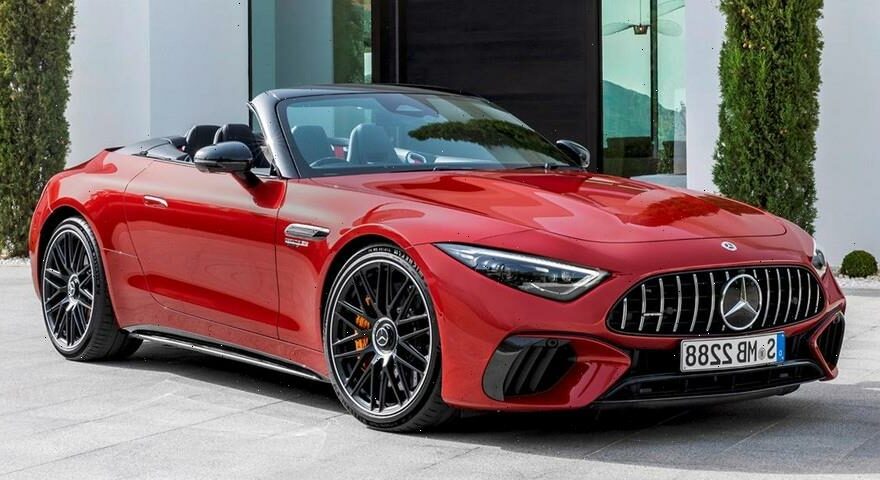 The Mercedes-Benz SL-Class is rooted on the racetrack. Initially designed as the automaker’s entry to the 1952 racing season, the luxury soft-top automobile was such a hit that Mercedes adapted it for sports car enthusiasts just two years later, debuting the 1954’s road-going SL-Class. While the new iteration of the car was modified to abide by street legal standards, Mercedes-Benz hung on to its “SL” designation, a derivative from the German Sport-Leicht, meaning Sport Light.

Nearly 70 years later, Mercedes-Benz (in tandem with its AMG division) has returned to its roots with an SL model outfitted for the modern era: the 2022 Mercedes-AMG SL Roadster. The all-new soft top vehicle retains signature design elements of the iconic 1954 original, while adapting to run on race tracks and highways alike by granting the driver total control of the vehicle’s movement

For this latest issue of Open Road, Hypebeast tried out the roadster first-hand for a comprehensive study of what it’s like to get behind the wheel of the luxury sports car.1 of 3 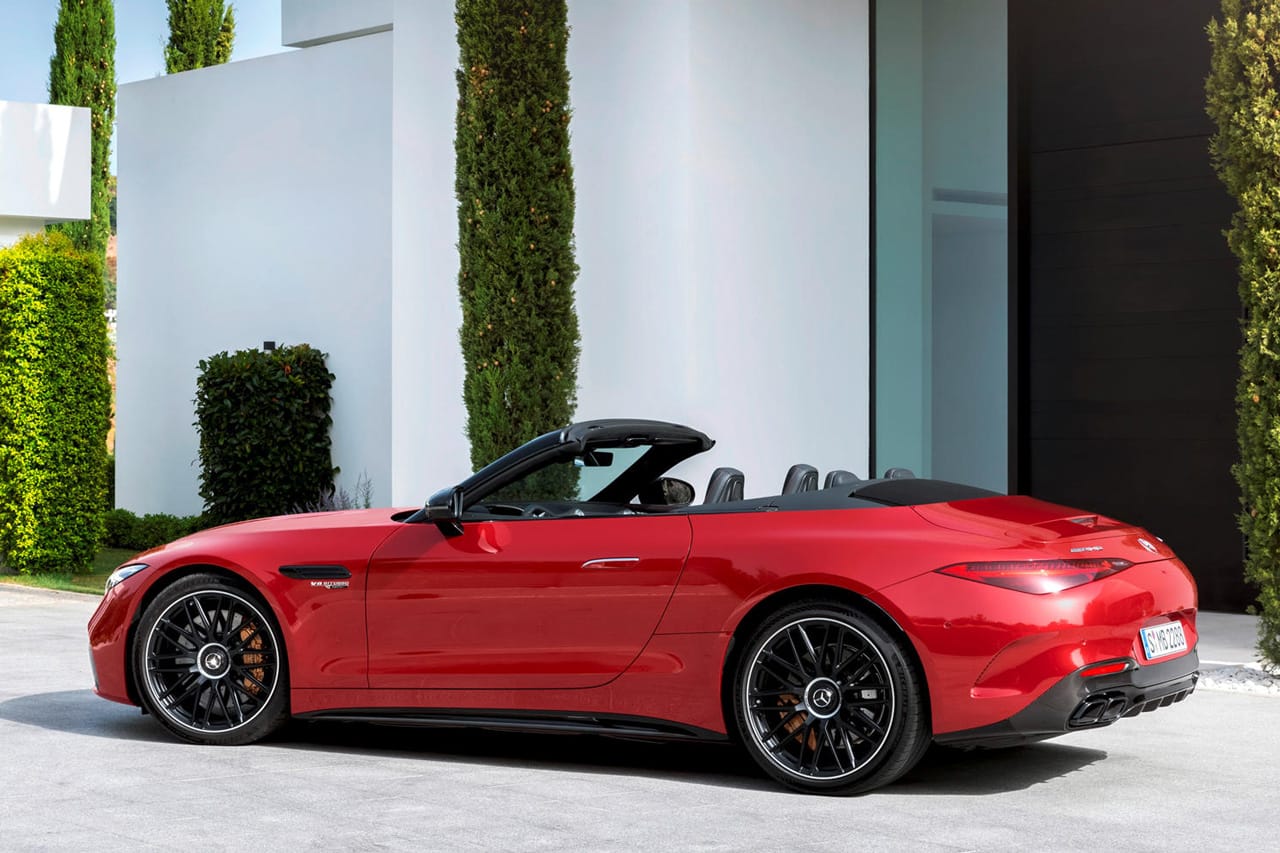 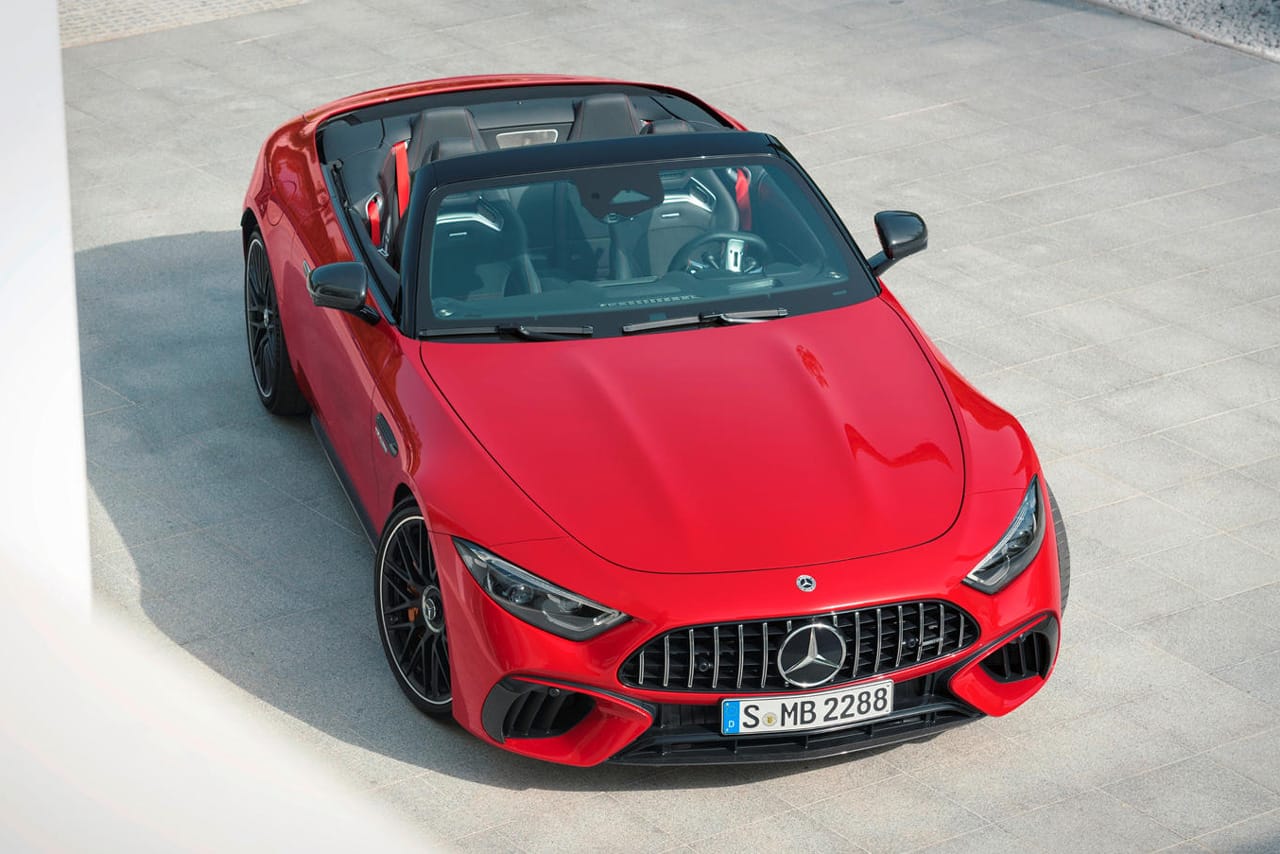 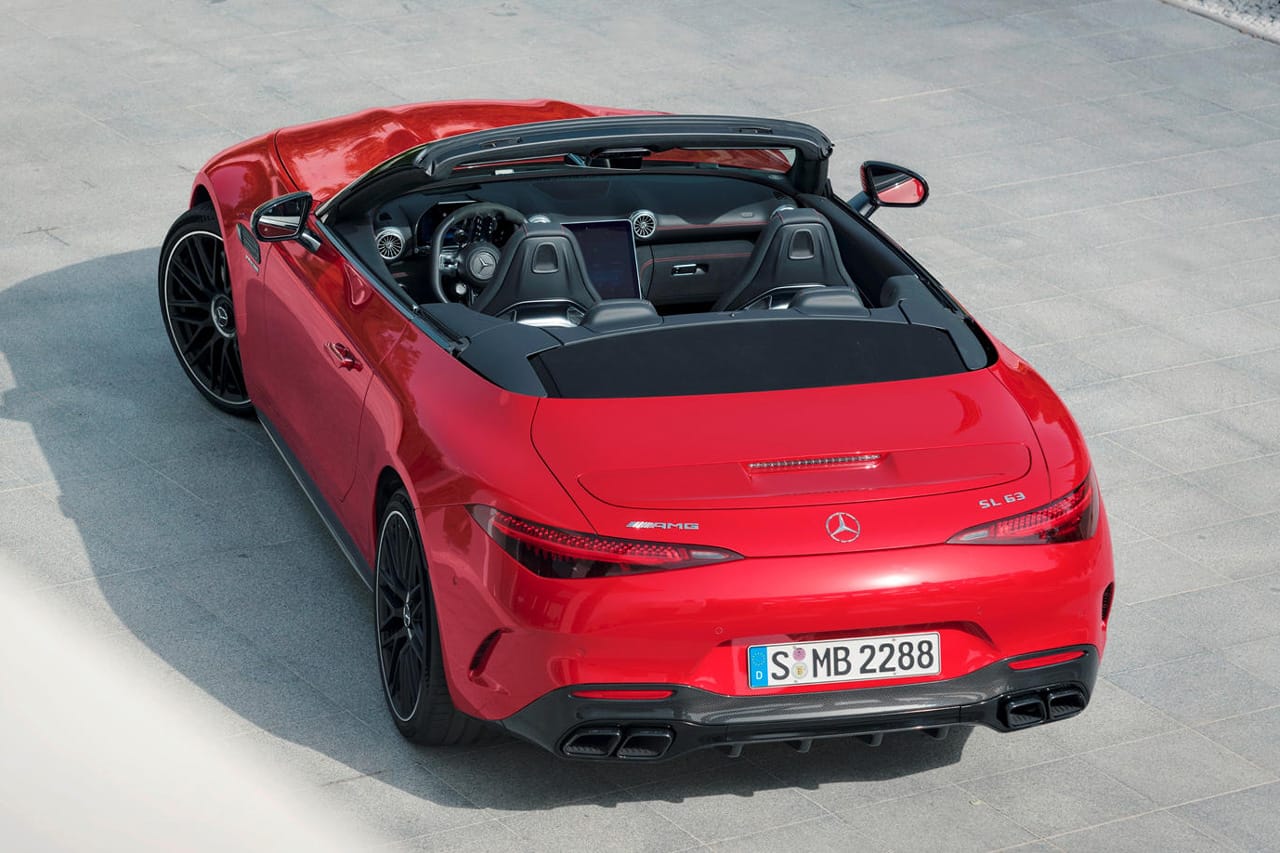 Upon entering the car, one notices the elevated composition of the interior. Red stitching winds around the steering wheel, dashboard and driver and passenger seats, tying the cabin in a cohesive yet subtle look. For an added flair, users can color-customize a thin strip of lighting that traces the dashboard and inner doors, or opt to turn the lighting off entirely.

Although the roadster technically advertises 2+2 seating, it’s truly more suitable for just two passengers – an unsurprising discovery for a sports car. Nonetheless, we rolled the passenger seat up to knee-cramping proportions and shoved a third person in the back row. While the backseat passenger reported that she “wasn’t that uncomfortable,” your best bet is to stick to two passengers and use the extra room to play around with the seat controls.

Among the more obvious features differentiating the Roadster from its 1950s sibling is a shiny infotainment system – a bright and responsive one, too. Preloaded with Apple apps and cell phone pairing capabilities through Bluetooth or USB cable, it’s as high-tech as you’d expect from the marque (check out the S-Class if you need reminding). Parallel parking and backing up are also made significantly easier with a surround-view camera. At approximately the size of an iPad Pro, it was entertaining to swipe around the system but such a huge screen made it feel a bit cluttered and almost distracted from the sleekness of the interior. I was thinking that it would be ideal if the screen could roll down into the center console to be hidden away when not in use.

Aside from Apple’s app offerings, Mercedes-AMG has packed the system with its own opulent technology. Under the comfort tab, for instance, passengers can treat themselves to a multi-contoured seat massage, which we experimented with while in-park. There’s also a wide array of climate controls, including a heated steering wheel option for cold-handed drivers.

The more flashy features aside, the Roadster integrates a Burmester surround sound system with speakers embedded in the dashboard, doors and backseat cushions. Blasting the new Kendrick Lamar album, we unanimously agreed that the sound quality was crisp and immersive, as if one was listening to music within a bubble.1 of 3 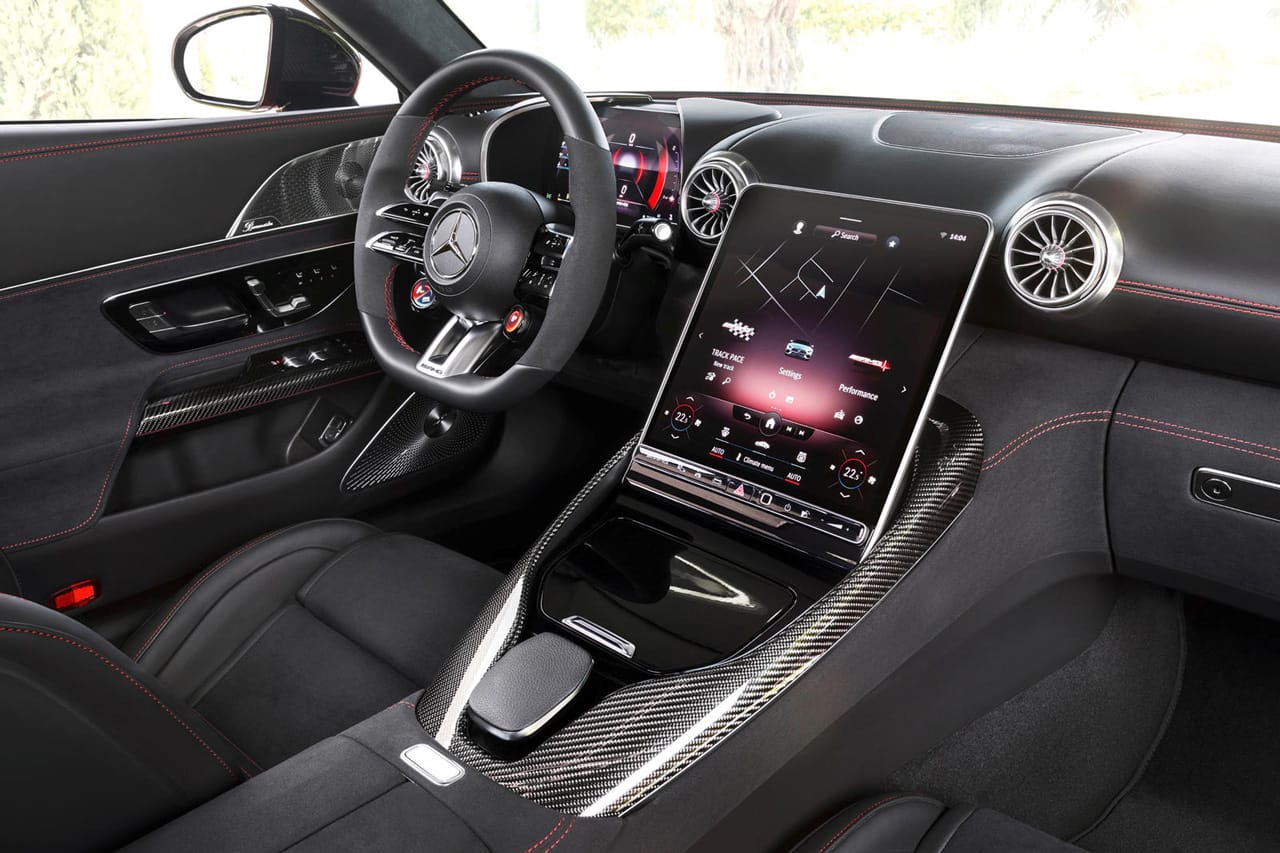 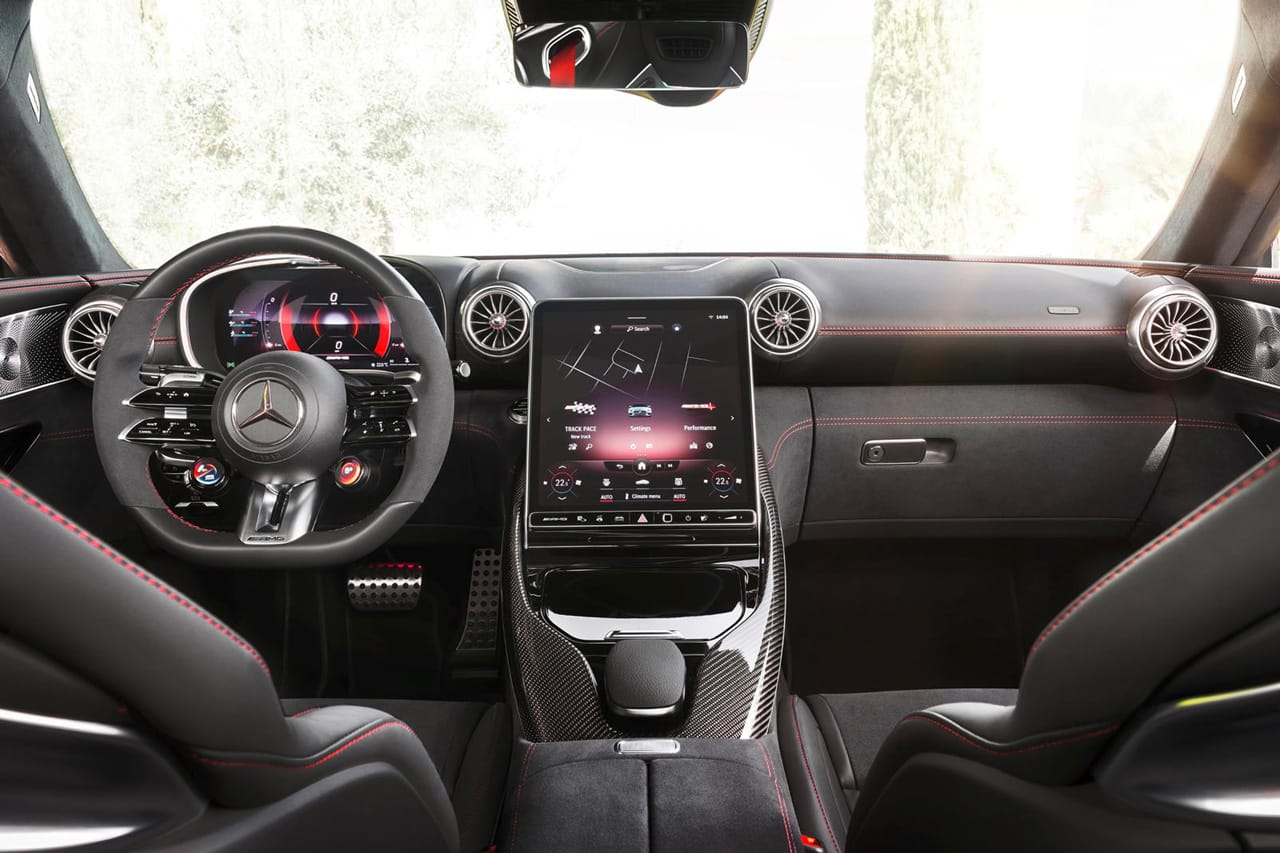 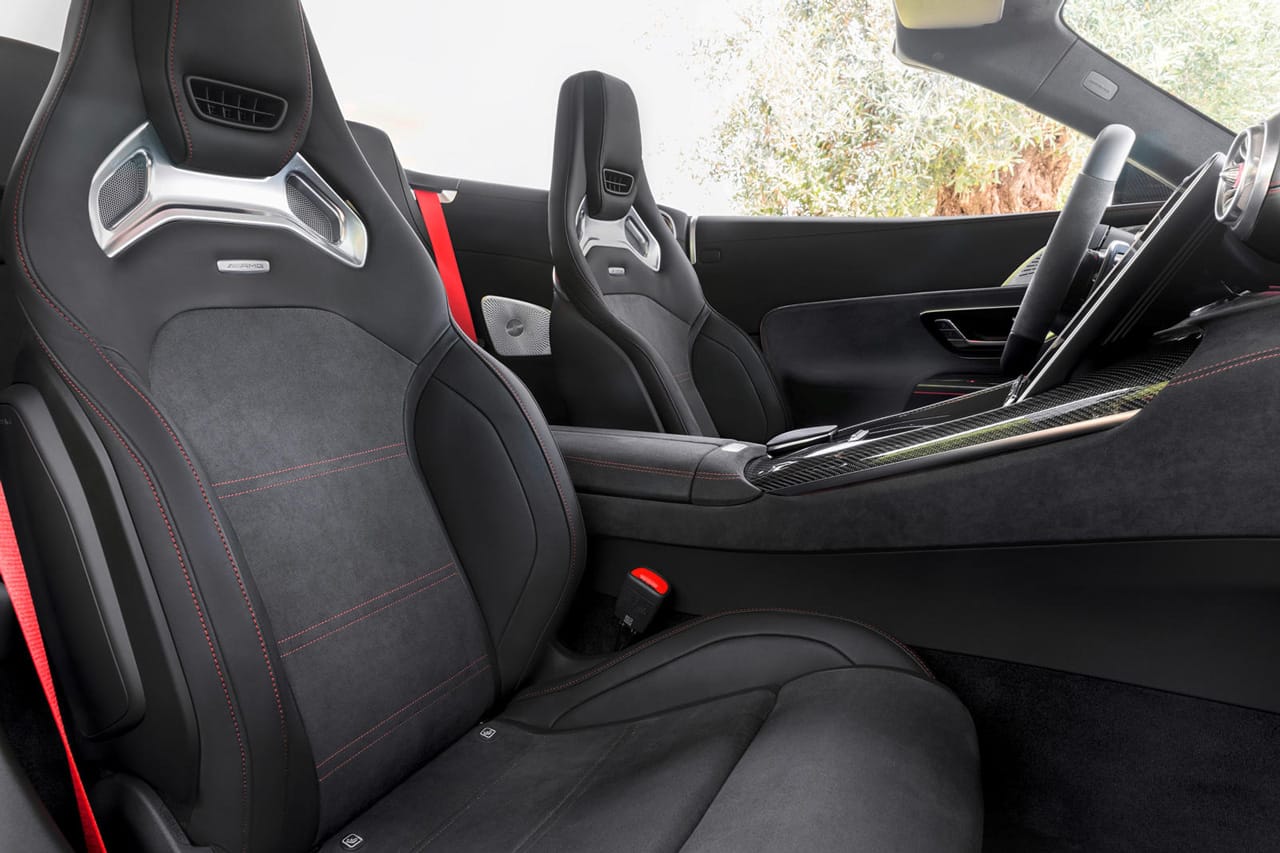 We began our journey in lower Manhattan, so we didn’t get to flex the car’s performance capabilities until outside of the city. Once on the highway, however, the Roadster proved worthy of its name, quickly accelerating and decelerating at a moment’s notice, all without feeling jerky. Wavering between 100 MPH and 120 MPH, the Roadster quite literally floated. Every movement the car made was effortless. The experience of being in the Roadster as it flashed down the highway was powerful and exhilarating, yet felt as if we weren’t sitting in a car at all but rather we were ascending up a ski lift. It was that light and smooth.

In terms of its safety precautions, Mercedes-AMG developed its own Ride Control system for sports cars like the SL Roadster, relying on steel suspension equipped with aluminum dampers and lightweight coil springs. Depending on the speed of the vehicle, the rear wheels respond by turning in either the opposite direction or in the same direction as the front wheels to improve stability and maneuverability. When we attempted to quickly change lanes while waiting in traffic, the front wheels resisted, facing in the opposite direction to keep us on a straight track. We were still able to shift a lane over simply by turning the wheel a bit more, though I could see this feature potentially posing a problem if a driver decides to take an abrupt turn at a higher speed.

Once on the open roads of upstate New York, we were finally able to truly put the Roadster’s maneuverability to the test. The car required little additional help from the driver as it embraced the winding roads with precision, retaining the sensation of smoothness it initiated on the highway, this time, without any fight from the wheels.

As for how the Roadster matches up to the SL’s storied racing pedigree; 1954’s SL-Class famously had a top speed approximately 160 MPH, crowning it the fastest production car of its time. Today’s SL 63, meanwhile, boasts a maximum speed of 196 MPH and can jump from 0 mph to 60 MPH (0 kph to 97 kph) in less than four seconds.1 of 4 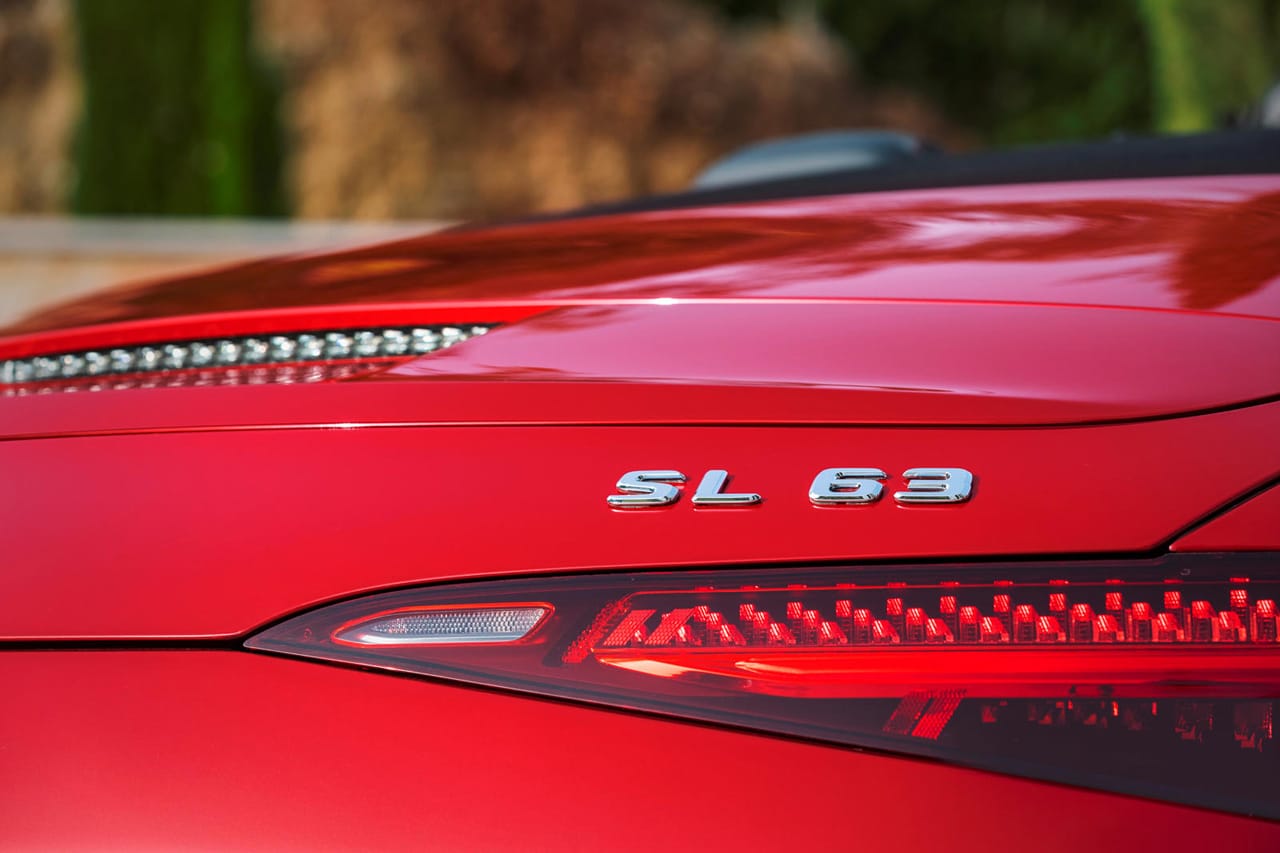 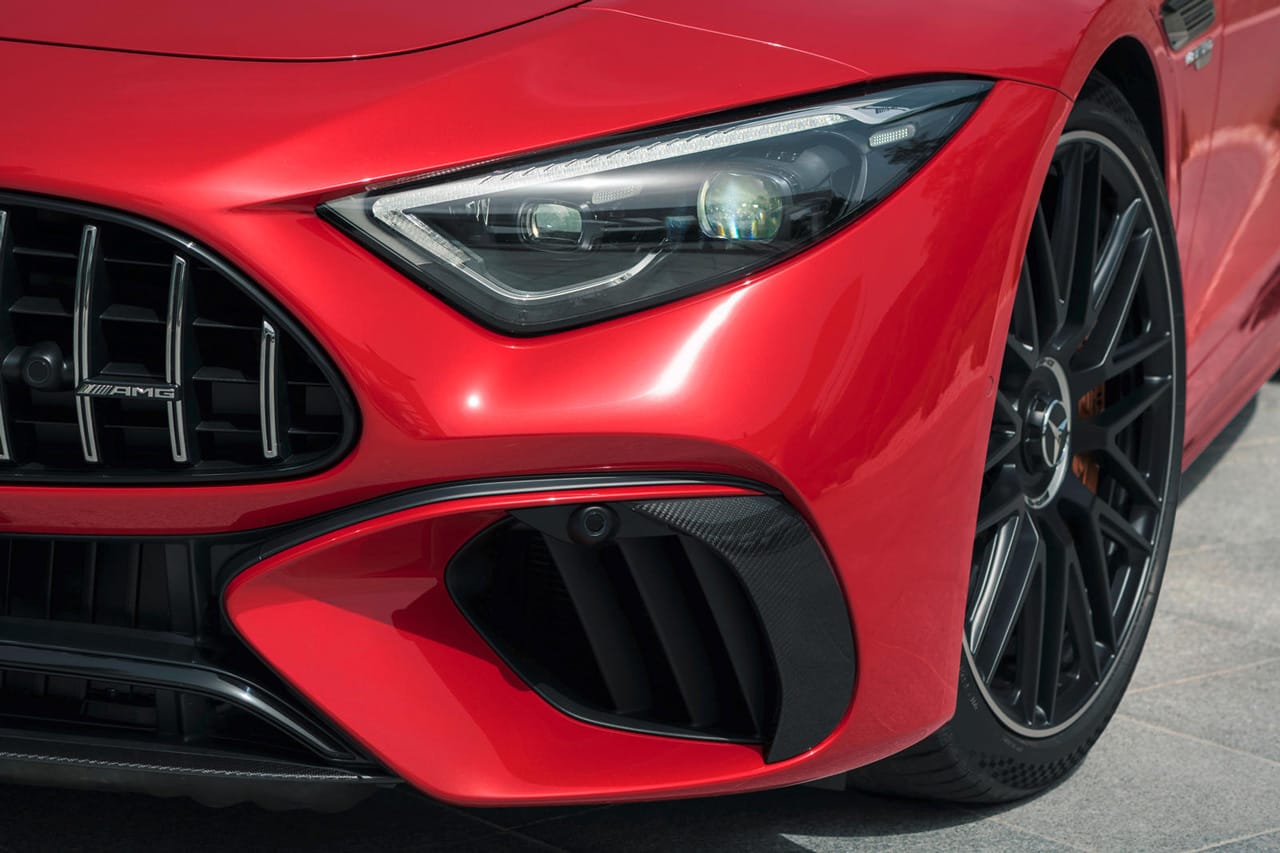 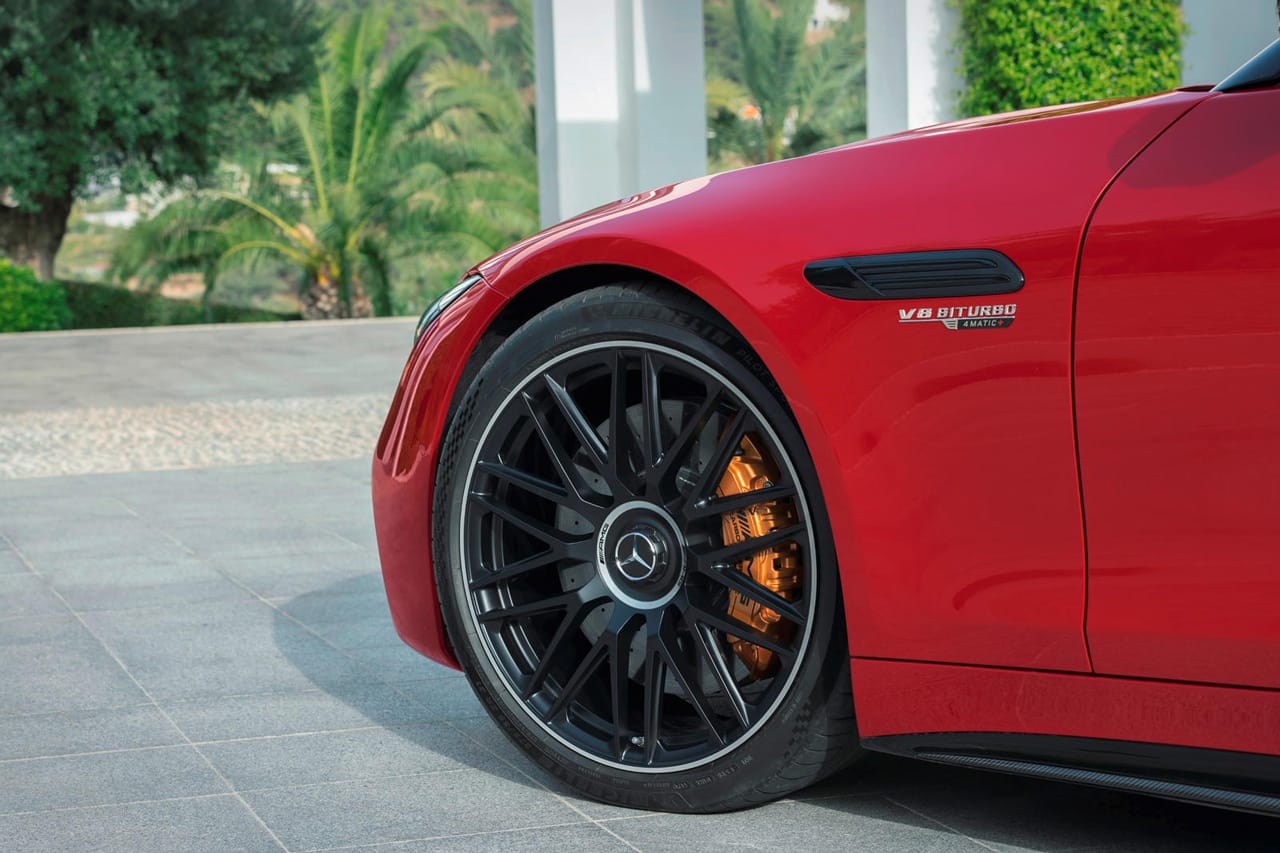 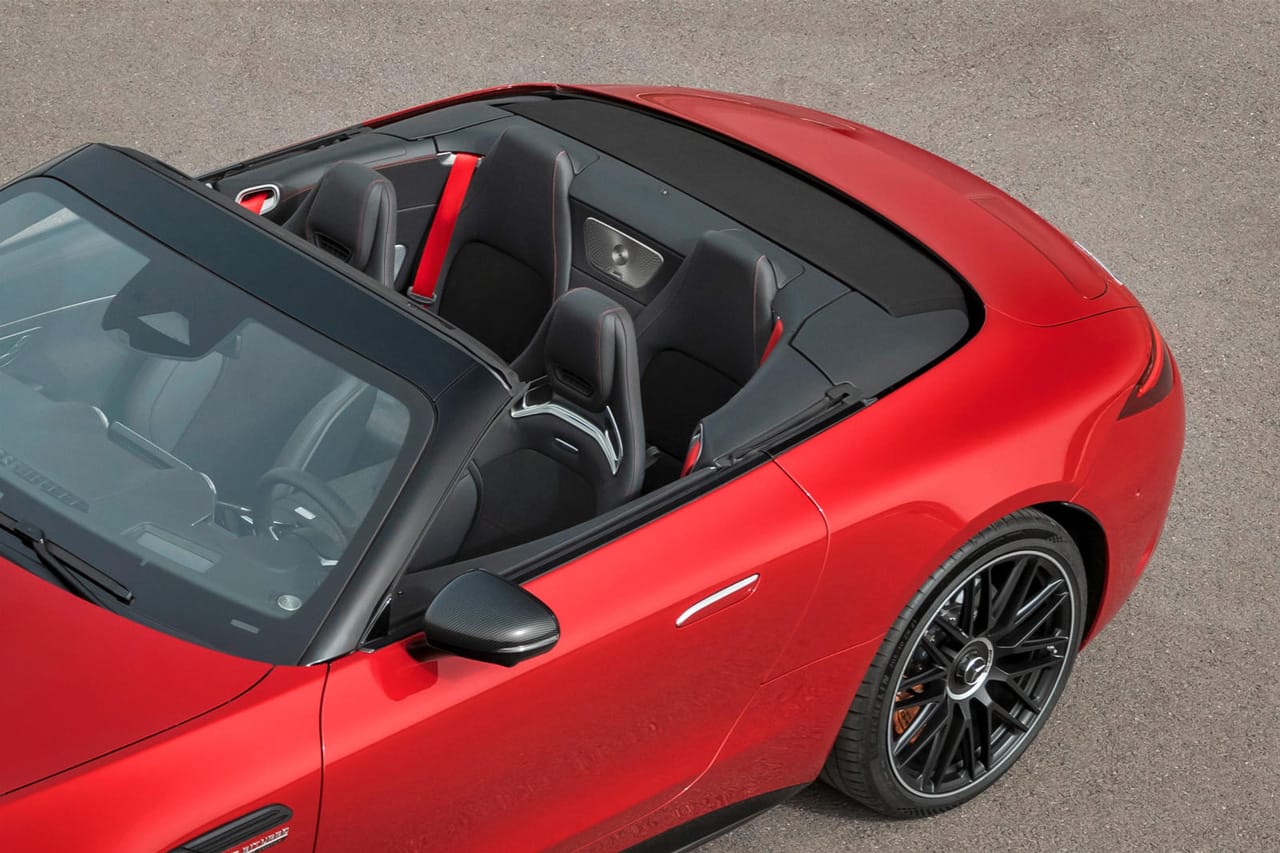 If you have $178,100 USD to spare and looking for peak performance, the 2022 Mercedes-AMG SL Roadster presents itself as a worthy contender for speed fiends with an eye for sophisticated design. Setting the Roadster apart from other sports cars that have hit the market this year is its appreciation for Mercedes’ roots in motorsport, dating back its first race well over a century. Everywhere we went, from the traffic of the city’s West Village to an apple orchard in rural upstate, the Roadster received nods and grins from passerby admiring the iconic car in its reimagined state.
Source: Read Full Article