Carrots does not want to be called Carrots. She was emphatic about that during a mini-reunion that I hosted.

Carrots — oops, Carolyn Fabricant, who now lives in North Adams, Mass. — was one of the high school students in a Norman Rockwell painting called “Bright Future in Banking” that I wrote about last month. The article said that Rockwell often asked neighbors in Stockbridge, Mass., to pose for him after he moved there in 1953. Nearly 70 years later, one of them — Charlotte Sorenson, who now lives in Boulder, Colo. — had recognized herself when she saw “Bright Future” in a newspaper advertisement for an art gallery that was selling it.

In the next-to-last paragraph, I mentioned other students in the painting who had also posed for Rockwell. The two boys flanking her were both named Norman. And then there was a girl on the left side of the frame, the one Ms. Sorenson remembered as Carrots. Perhaps, Ms. Sorenson said, it was because she had red hair.

Ms. Sorenson was out of touch with all of them, but I heard from Ms. Fabricant — Carrots — by email a couple of days after the article appeared.

She never had red hair, she said. The nickname originated with the oldest of four sisters she often played with when they were children. She mused about powerful people with nicknames that stuck, like I. Lewis Libby Jr., the former Bush administration aide who was known as Scooter, apparently because he scooted across his crib as a child.

But about Carrots. “‘Carrots’ was actually a contraction of ‘Carolyn rots,’” a phrase the oldest-sister playmate had “gleefully repeated until the two words elided,” Ms. Fabricant told me in the email after saying that her hair had always been brown. She and the sisters have remained in touch, and they called her Carrots until several years ago, when Ms. Fabricant asked them to stop. “I was in my 70s then and just didn’t feel like a ‘Carrots’ anymore,” she said.

She did feel like reconnecting with Ms. Sorenson, and we arranged a Zoom session.

They reminisced about the sisters who called Ms. Fabricant you-know-what. They laughed about a yearbook photo of the two of them that Ms. Sorenson had saved. The caption read “Or just for fun.” Someone had written five words in blue ink after that — “all through life I hope!” — and a signature: Carrots. 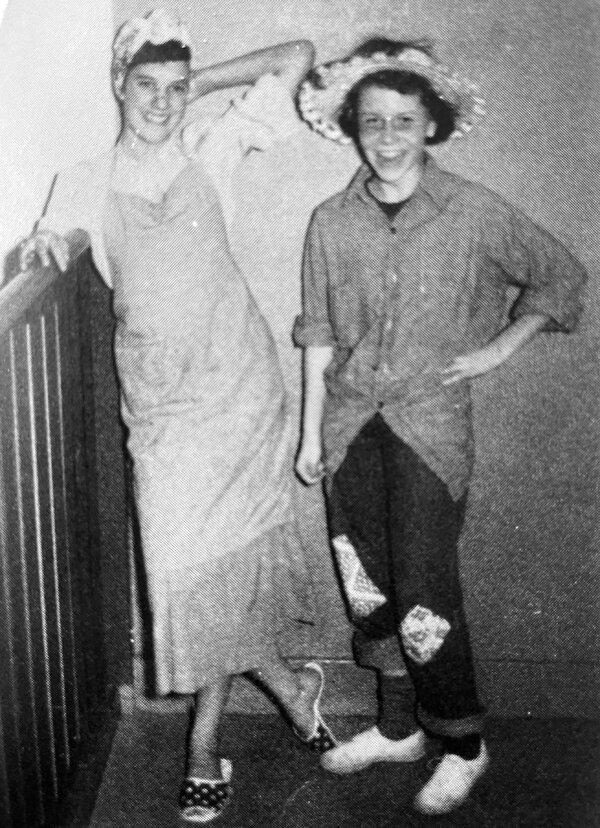 They had seen each other once since high school. That was in the 1960s, when Ms. Fabricant lived in Italy and Ms. Sorenson in Switzerland. Ms. Fabricant remembered going to Lausanne to see Ms. Sorenson and her infant daughter, Kristen.

Ms. Fabricant said that when she returned to the United States, she became a teacher at Abraham Lincoln High School in Brooklyn, a photographer and a restaurant cook before working as an administrative assistant at the City College of New York.

Ms. Sorenson asked how Ms. Fabricant had come across the article. She said she had gotten an email from one of the sisters who used to call her, um, Carrots.

Ms. Sorenson had not remembered that Ms. Fabricant’s father, a pharmacist who had served in the Navy, had bought the drugstore in Stockbridge with a partner soon after World War II. “I served as a soda clerk around the time of the Rockwell painting,” Ms. Fabricant said, adding that she collected autographs from well-known customers who stopped by, including the playwrights William Inge and Tennessee Williams.

“Rockwell was a frequent customer,” she said. “His studio was behind a big picture window in the building directly across the street. I could stand in the doorway and look up into Rockwell’s studio. He was in and out all the time.”

Another regular was the violinist Fritz Kreisler, who Ms. Fabricant said often called his broker from the telephone booth in the back of the drugstore. Some days, he would order a strawberry ice cream soda when he hung up the phone and stepped out of the booth. “That was his personal treat to himself for whatever the broker must have told him was good news,” she said.

In the article, I had written that Ms. Sorenson felt disappointment when she saw the painting in The Saturday Evening Post.

“It was just an ad,” Ms. Fabricant said during the online reunion.